It'll Never Be The Same! 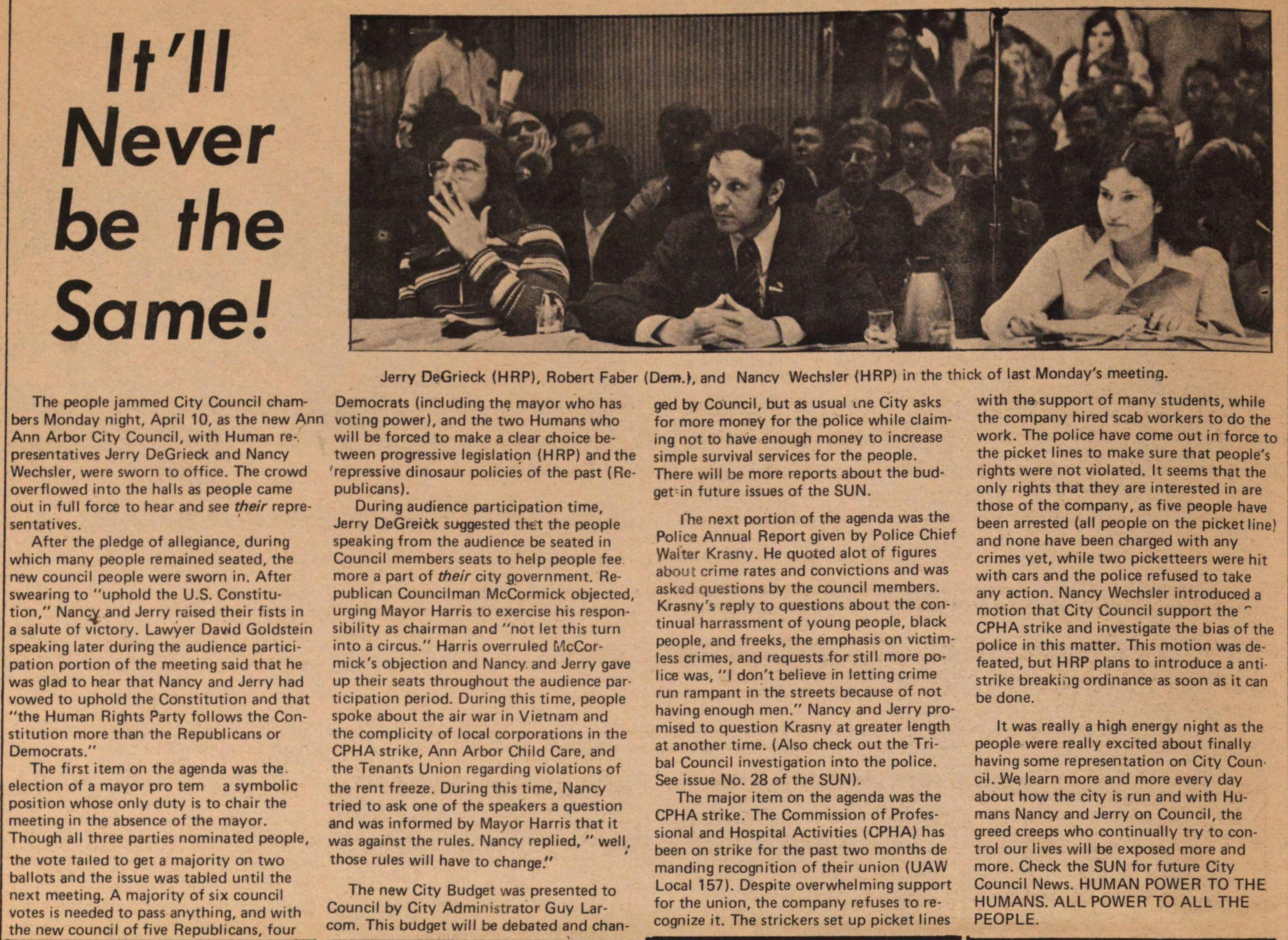 It'll Never be the Same!

The people jammed City Council chambers Monday night, April 10, as the new Ann Ann Arbor City Council, with Human representatives Jerry DeGrieck and Nancy Wechsler, were sworn to office. The crowd overflowed into the halls as people came out in full force to hear and see their representatives.

After the pledge of allegiance, during which many people remained seated, the new council people were sworn in. After swearing to "uphold the U.S. Constitution," Nancy and Jerry raised their fists in a salute of victory. Lawyer David Goldstein speaking later during the audience participation portion of the meeting said that he was glad to hear that Nancy and Jerry had vowed to uphold the Constitution and that "the Human Rights Party follows the Constitution more than the Republicans or Democrats."

The first item on the agenda was the election of a mayor pro tem, a symbolic position whose only duty is to chair the meeting in the absence of the mayor. Though all three parties nominated people, the vote failed to get a majority on two ballots and the issue was tabled until the next meeting. A majority of six council votes is needed to pass anything, and with the new council of five Republicans, four Democrats (including the mayor who has voting power), and the two Humans who will be forced to make a clear choice between progressive legislation (HRP) and the repressive dinosaur policies of the past (Republicans).

During audience participation time, Jerry DeGreick suggested that the people speaking from the audience be seated in Council members seats to help people feel more a part of their city government. Republican Councilman McCormick objected, urging Mayor Harris to exercise his responsibility as chairman and "not let this turn into a circus." Harris overruled McCormick's objection and Nancy and Jerry gave up their seats throughout the audience participation period. During this time, people spoke about the air war in Vietnam and the complicity of local corporations in the CPHA strike, Ann Arbor Child Care, and the Tenants Union regarding violations of the rent freeze. During this time, Nancy tried to ask one of the speakers a question and was informed by Mayor Harris that it was against the rules. Nancy replied, "well, those rules will have to change."

The new City Budget was presented to Council by City Administrator Guy Larcom. This budget will be debated and changed by Council, but as usual the City asks for more money for the police while claiming not to have enough money to increase simple survival services for the people. There will be more reports about the budget in future issues of the SUN.

The next portion of the agenda was the Police Annual Report given by Police Chief Walter Krasny. He quoted a lot of figures about crime rates and convictions and was asked questions by the council members. Krasny's reply to questions about the continual harassment of young people, black people, and freeks, the emphasis on victimless crimes, and requests for still more police was, "I don't believe in letting crime run rampant in the streets because of not having enough men." Nancy and Jerry promised to question Krasny at greater length at another time. (Also check out the Tribal Council investigation into the police. See issue No. 28 of the SUN).

The major item on the agenda was the CPHA strike. The Commission of Professional and Hospital Activities (CPHA) has been on strike for the past two months demanding recognition of their union (UAW Local 157). Despite overwhelming support for the union, the company refuses to recognize it. The strikers set up picket lines with the support of many students, while the company hired scab workers to do the work. The police have come out in force to the picket lines to make sure that people's rights were not violated. It seems that the only rights that they are interested in are those of the company, as five people have been arrested (all people on the picket line) and none have been charged with any crimes yet, while two picketers were hit with cars and the police refused to take any action. Nancy Wechsler introduced a motion that City Council support the CPHA strike and investigate the bias of the police in this matter. This motion was defeated, but HRP plans to introduce a antistrike breaking ordinance as soon as it can be done.

It was really a high energy night as the people were really excited about finally having some representation on City Council. We. learn more and more every day about how the city is run and with Humans Nancy and Jerry on Council, the greed creeps who continually try to control our lives will be exposed more and more. Check the SUN for future City Council News. HUMAN POWER TO THE HUMANS. ALL POWER TO ALL THE PEOPLE.