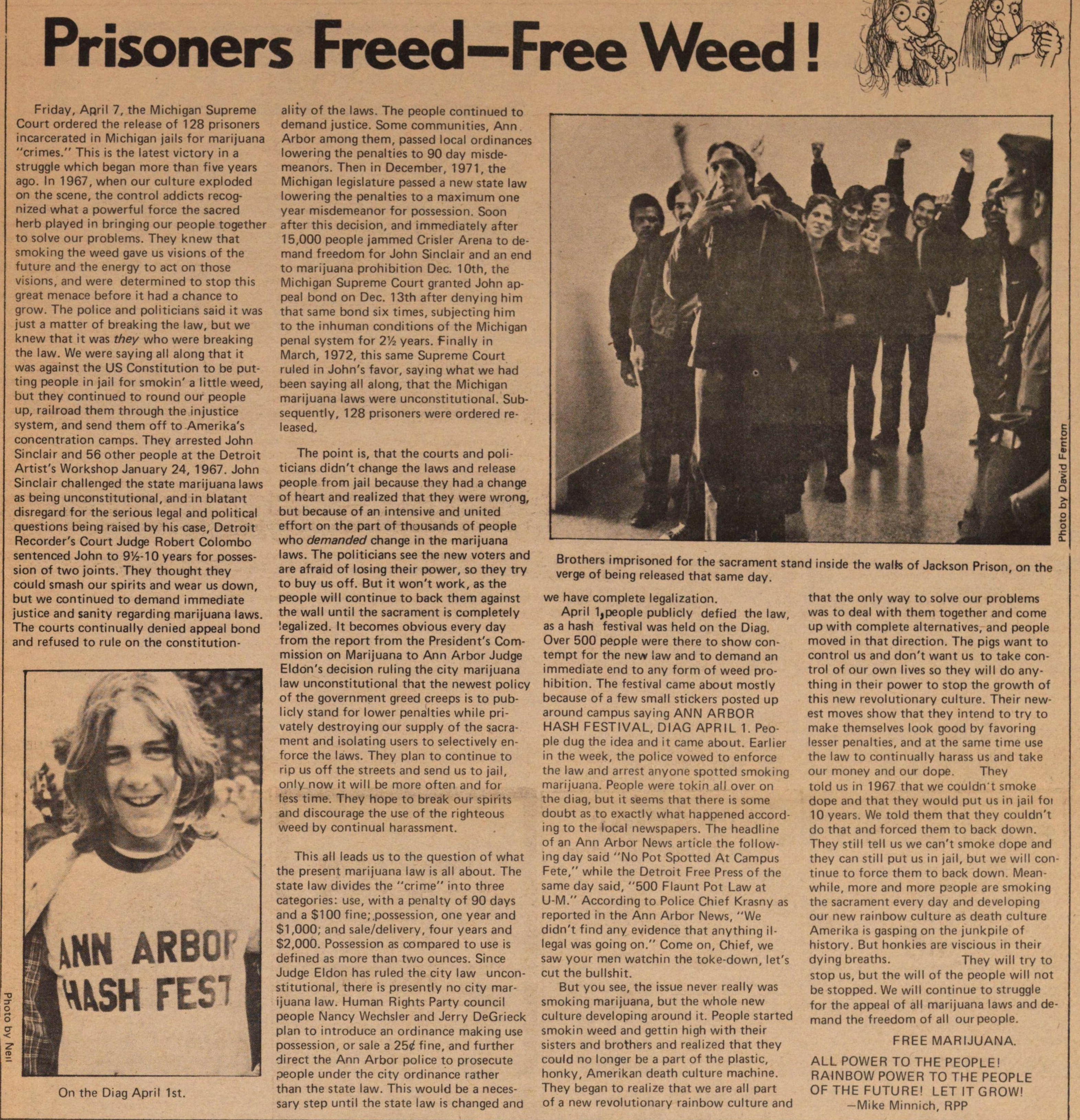 Friday, April 7, the Michigan Supreme Court ordered the release of 128 prisoners incarcerated in Michigan jails for marijuana "crimes." This is the latest victory in a struggle which began more than five years ago. In 1967, when our culture exploded on the scene, the control addicts recognized what a powerful force the sacred herb played in bringing our people together to solve our problems. They knew that smoking the weed gave us visions of the future and the energy to act on those visions, and were determined to stop this great menace before it had a chance to grow. The police and politicians said it was just a matter of breaking the law, but we knew that it was they who were breaking the law. We were saying all along that it was against the US Constitution to be putting people in jail for smokin' a little weed, but they continued to round our people up, railroad them through the injustice system, and send them off to Amerika's concentration camps. They arrested John Sinclair and 56 other people at the Detroit Artist's Workshop January 24, 1967. John Sinclair challenged the state marijuana laws as being unconstitutional, and in blatant disregard for the serious legal and political questions being raised by his case, Detroit Recorder's Court Judge Robert Colombo sentenced John to 9 1/2 - 10 years for possession of two joints. They thought they could smash our spirits and wear us down, but we continued to demand immediate justice and sanity regarding marijuana laws. The courts continually denied appeal bond and refused to rule on the constitutionality of the laws. The people continued to demand justice. Some communities, Ann Arbor among them, passed local ordinances lowering the penalties to 90 day misdemeanors. Then in December, 1971, the Michigan legislature passed a new state law lowering the penalties to a maximum one year misdemeanor for possession. Soon after this decision, and immediately after 15,000 people jammed Crisler Arena to demand freedom for John Sinclair and an end to marijuana prohibition Dec. 10th, the Michigan Supreme Court granted John appeal bond on Dec. 13th after denying him that same bond six times, subjecting him to the inhuman conditions of the Michigan penal system for 2 1/2 years. Finally in March, 1972, this same Supreme Court ruled in John's favor, saying what we had been saying all along, that the Michigan marijuana laws were unconstitutional. Subsequently, 128 prisoners were ordered released.

The point is, that the courts and politicians didn't change the laws and release people from jail because they had a change of heart and realized that they were wrong, but because of an intensive and united effort on the part of thousands of people who demanded change in the marijuana laws. The politicians see the new voters and are afraid of losing their power, so they try to buy us off. But it won't work, as the people will continue to back them against the wall until the sacrament is completely legalized. It becomes obvious every day from the report from the President's Commission on Marijuana to Ann Arbor Judge Eldon's decision ruling the city marijuana law unconstitutional that the newest policy of the government greed creeps is to publicly stand for lower penalties while privately destroying our supply of the sacrament and isolating users to selectively enforce the laws. They plan to continue to rip us off the streets and send us to jail, only now it will be more often and for less time. They hope to break our spirits and discourage the use of the righteous weed by continual harassment.

This all leads us to the question of what the present marijuana law is all about. The state law divides the "crime" into three categories: use, with a penalty of 90 days and a $100 fine; possession, one year and $1,000; and sale/delivery, four years and $2,000. Possession as compared to use is defined as more than two ounces. Since Judge Eldon has ruled the city law unconstitutional, there is presently no city marijuana law. Human Rights Party council people Nancy Wechsler and Jerry DeGrieck plan to introduce an ordinance making use possession, or sale a 25 cent fine, and further direct the Ann Arbor police to prosecute people under the city ordinance rather than the state law. This would be a necessary step until the state law is changed and we have complete legalization.

April 1, people publicly defied the law, as a hash festival was held on the Diag. Over 500 people were there to show contempt for the new law and to demand an immediate end to any form of weed prohibition. The festival came about mostly because of a few small stickers posted up around campus saying ANN ARBOR HASH FESTIVAL, DIAG APRIL 1. People dug the idea and it came about. Earlier in the week, the police vowed to enforce the law and arrest anyone spotted smoking marijuana. People were tokin all over on the diag, but it seems that there is some doubt as to exactly what happened according to the local newspapers. The headline of an Ann Arbor News article the following day said "No Pot Spotted At Campus Fete," while the Detroit Free Press of the same day said, "500 Flaunt Pot Law at U-M." According to Police Chief Krasny as reported in the Ann Arbor News, "We didn't find any evidence that anything illegal was going on." Come on, Chief, we saw your men watchin the toke-down, let's cut the bullshit.

But you see, the issue never really was smoking marijuana, but the whole new culture developing around it. People started smokin weed and gettin high with their sisters and brothers and realized that they could no longer be a part of the plastic, honky, Amerikan death culture machine. They began to realize that we are all part of a new revolutionary rainbow culture and that the only way to solve our problems was to deal with them together and come up with complete alternatives, and people moved n that direction. The pigs want to control us and don't want us to take control of our own lives so they will do anything n their power to stop the growth of this new revolutionary culture. Their newest moves show that they intend to try to make themselves look good by favoring lesser penalties, and at the same time use the law to continually harass us and take our money and our dope.

They told us in 1967 that we couldn't smoke dope and that they would put us in jail for 10 years. We told them that they couldn't do that and forced them to back down. They still tell us we can't smoke dope and they can still put us in jail, but we will continue to force them to back down. Meanwhile, more and more people are smoking the sacrament every day and developing our new rainbow culture as death culture Amerika is gasping on the junkpile of history. But honkies are vicious in their dying breaths.

They will try to stop us, but the will of the people will not be stopped. We will continue to struggle for the appeal of all marijuana laws and demand the freedom of all our people.

Brothers imprisoned for the sacrament stand inside the walls of Jackson Prison, on the verge of being released that same day. -- Photo by David Fenton