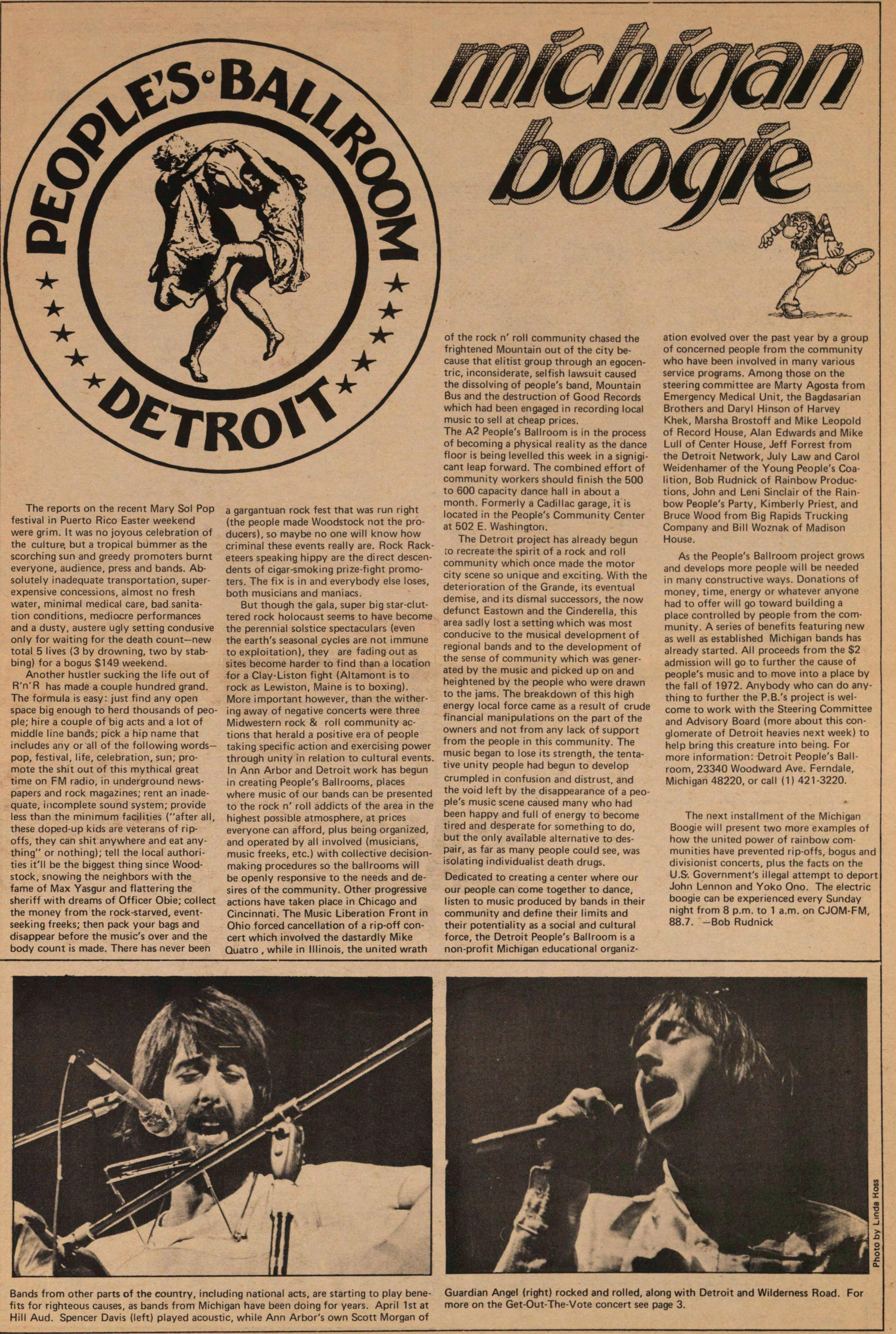 The reports on the recent Mary Sol Pop festival in Puerto Rico Easter weekend were grim. It was no joyous celebration of the culture but a tropical bummer as the scorching sun and greedy promoters burnt everyone, audience, press and bands. Absolutely inadequate transportation, super-expensive concessions, almost no fresh water, minimal medical care, bad sanitation conditions, mediocre performances and a dusty, austere ugly setting conducive only for waiting for the death count -- new total 5 lives (3 by drowning, two by stabbing) for a bogus $149 weekend.

Another hustler sucking the life out of R'n'R has made a couple hundred grand. The formula is easy: just find any open space big enough to herd thousands of people; hire a couple of big acts and a lot of middle line bands; pick a hip name that includes any or all of the following words -- pop, festival, life, celebration, sun; promote the shit out of this mythical great time on FM radio, in underground newspapers and rock magazines; rent an inadequate, incomplete sound system; provide less than the minimum facilities ("after all, these doped-up kids are veterans of ripoffs, they can shit anywhere and eat anything" or nothing); tell the local authorities it'll be the biggest thing since Woodstock, snowing the neighbors with the fame of Max Yasgur and flattering the sheriff with dreams of Officer Obie; collect the money from the rock-starved, event-seeking freeks; then pack your bags and disappear before the music's over and the body count is made. There has never been a gargantuan rock fest that was run right (the people made Woodstock not the producers), so maybe no one will know how criminal these events really are. Rock Racketeers speaking hippy are the direct descendants of cigar-smoking prize-fight promoters. The fix is in and everybody else loses, both musicians and maniacs.

But though the gala, super big star-cluttered rock holocaust seems to have become the perennial solstice spectaculars (even the earth's seasonal cycles are not immune to exploitation), they are fading out as sites become harder to find than a location for a Clay-Liston fight (Altamont is to rock as Lewiston, Maine is to boxing). More important however, than the withering away of negative concerts were three Midwestern rock & roll community actions that herald a positive era of people taking specific action and exercising power through unity in relation to cultural events. In Ann Arbor and Detroit work has begun in creating People's Ballrooms, places where music of our bands can be presented to the rock n' roll addicts of the area in the highest possible atmosphere, at prices everyone can afford, plus being organized, and operated by all involved (musicians, music freeks, etc.) with collective decision-making procedures so the ballrooms will be openly responsive to the needs and desires of the community. Other progressive actions have taken place in Chicago and Cincinnati. The Music Liberation Front in Ohio forced cancellation of a rip-off concert which involved the dastardly Mike Quatro, while in Illinois, the united wrath of the rock n' roll community chased the frightened Mountain out of the city because that elitist group through an egocentric, inconsiderate, selfish lawsuit caused the dissolving of people's band, Mountain Bus and the destruction of Good Records which had been engaged in recording local music to sell at cheap prices.

The A2 People's Ballroom is in the process of becoming a physical reality as the dance floor is being leveled this week in a significant leap forward. The combined effort of community workers should finish the 500 to 600 capacity dance hall in about a month. Formerly a Cadillac garage, it is located in the People's Community Center at 502 E. Washington.

The Detroit project has already begun to recreate the spirit of a rock and roll community which once made the motor city scene so unique and exciting. With the deterioration of the Grande, its eventual demise, and its dismal successors, the now defunct Eastown and the Cinderella, this area sadly lost a setting which was most conducive to the musical development of regional bands and to the development of the sense of community which was generated by the music and picked up on and heightened by the people who were drawn to the jams. The breakdown of this high energy local force came as a result of crude financial manipulations on the part of the owners and not from any lack of support from the people in this community. The music began to lose its strength, the tentative unity people had begun to develop crumpled in confusion and distrust, and the void left by the disappearance of a people's music scene caused many who had been happy and full of energy to become tired and desperate for something to do, but the only available alternative to despair, as far as many people could see, was isolating individualist death drugs.

Dedicated to creating a center where our our people can come together to dance, listen to music produced by bands in their community and define their limits and their potentiality as a social and cultural force, the Detroit People's Ballroom is a non-profit Michigan educational organization evolved over the past year by a group of concerned people from the community who have been involved in many various service programs. Among those on the steering committee are Marty Agosta from Emergency Medical Unit, the Bagdasarian Brothers and Daryl Hinson of Harvey Khek, Marsha Brostoff and Mike Leopold of Record House, Alan Edwards and Mike Lull of Center House, Jeff Forrest from the Detroit Network, July Law and Carol Weidenhamer of the Young People's Coalition. Bob Rudnick of Rainbow Productions, John and Leni Sinclair of the Rainbow People's Party, Kimberly Priest, and Bruce Wood from Big Rapids Trucking Company and Bill Woznak of Madison House.

As the People's Ballroom project grows and develops more people will be needed in many constructive ways. Donations of money, time, energy or whatever anyone had to offer will go toward building a place controlled by people from the community. A series of benefits featuring new as well as established Michigan bands has already started. All proceeds from the $2 admission will go to further the cause of people's music and to move into a place by the fall of 1972. Anybody who can do anything to further the P.B.'s project is welcome to work with the Steering Committee and Advisory Board (more about this conglomerate of Detroit heavies next week) to help bring this creature into being. For more information: Detroit People's Ballroom, 23340 Woodward Ave. Ferndale, Michigan 48220, or call (1) 421-3220.

The next installment of the Michigan Boogie will present two more examples of how the united power of rainbow communities have prevented rip-offs, bogus and divisionist concerts, plus the facts on the U.S. Government's illegal attempt to deport John Lennon and Yoko Ono. The electric boogie can be experienced every Sunday night from 8 p.m. to 1 a.m. on CJOM-FM, 88.7. -- Bob Rudnick

Bands from other parts of the country, including national acts, are starting to play benefits for righteous causes, as bands from Michigan have been doing for years. April 1st at Hill Aud. Spencer Davis (left) played acoustic, while Ann Arbor's own Scott Morgan of Guardian Angel (right) rocked and rolled, along with Detroit and Wilderness Road. For more of the Get-Out-The-Vote concert see page 3.