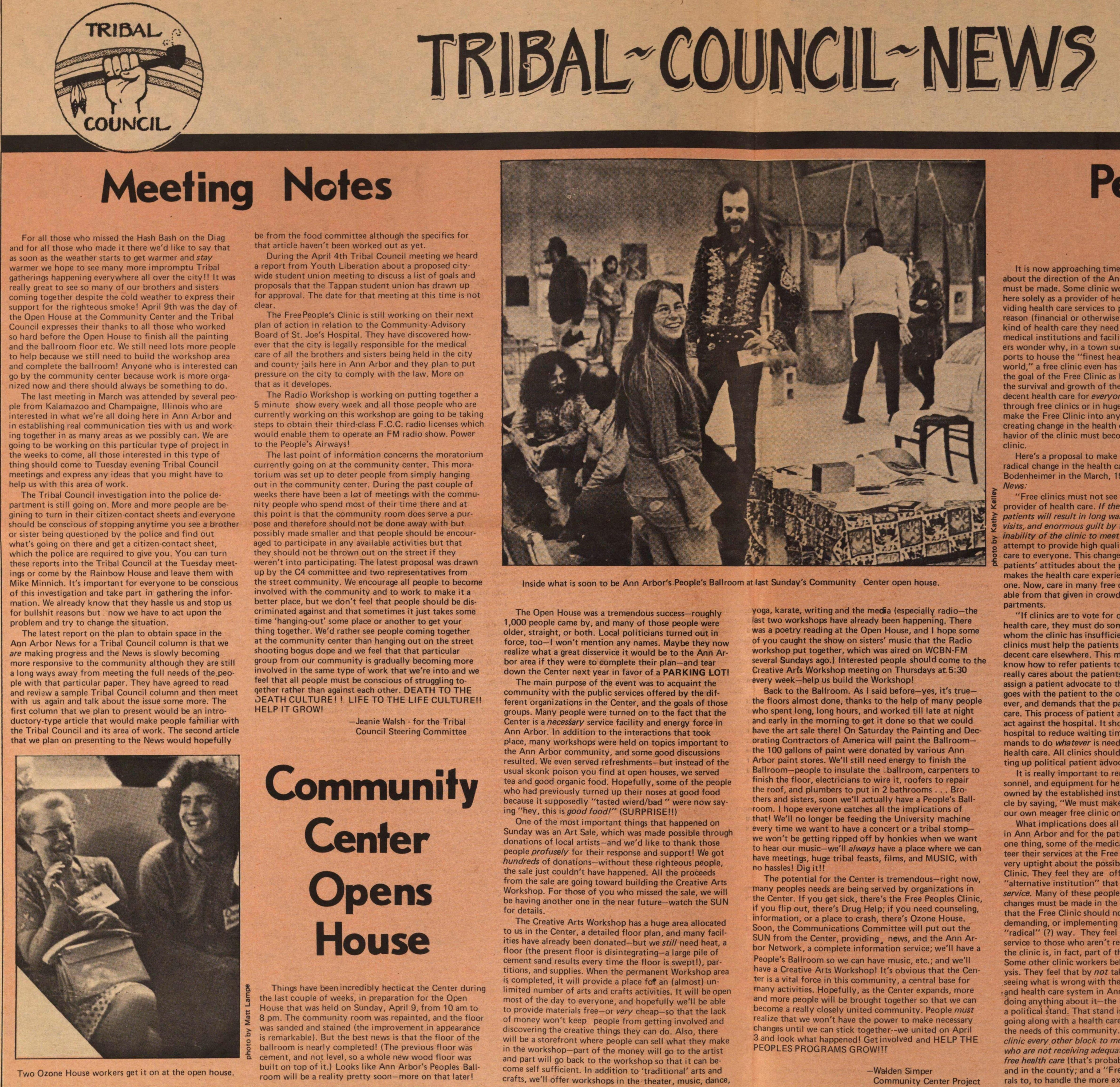 For all those who missed the Hash Bash on the Diag and for all those who made t there we'd like to say that as soon as the weather starts to get warmer and stay warmer we hope to see many more impromptu Tribal gatherings happening everywhere all over the city!! It was really great to see so many of our brothers and sisters coming together despite the cold weather to express their support for the righteous smoke! April 9th was the day of the Open House at the Community Center and the Tribal Council expresses their thanks to all those who worked so hard before the Open House to finish all the painting and the ballroom floor etc. We still need lots more people to help because we still need to build the workshop area and complete the ballroom! Anyone who is interested can go by the community center because work is more organized now and there should always be something to do. The last meeting in March was attended by several people from Kalamazoo and Champaigne, Illinois who are interested in what we're all doing here in Ann Arbor and in establishing real communication ties with us and working together in as many areas as we possibly can. We are going to be working on this particular type of project in the weeks to come, all those interested in this type of thing should come to Tuesday evening Tribal Council meetings and express any ideas that you might have to help us with this area of work. The Tribal Council investigation into the pólice department is still going on. More and more people are begining to turn in their citizen-contact sheets and everyone should be conscious of stopping anytime you see a brother or sister being questioned by the pólice and find out what's going on there and get a citizen-contact sheet, which the pólice are required to give you. You can turn these reports into the Tribal Council at the Tuesday meetings or come by the Rainbow House and leave them with Mike Minnich. It's important for everyone to be conscious of this investigaron and take part in gathering the information. We already know that they hassle us and stop us for bullshit reasons but now we have to act upon the problem and try to change the situation. The latest report on the plan to obtain space in the Ann Arbor News for a Tribal Council column is that we are making progress and the News is slowly becoming more responsive to the community although they are still a long ways away from meeting the full needs of the .people with that particular paper. They have agreed to read and reviw a sample Tribal Council column and then meet with us again and talk about the issue some more. The first column that we plan to present would be an ntroductory-type article that would make people familiar with the Tribal Council and its area of work. The second article that we plan on presenting to the News would hopefully be from the food committee although the specifics for that article haven't been worked out as yet. During the April 4th Tribal Council meeting we heard a report from Youth Liberation about a proposed citywide student union meeting to discuss a list of goals and proposals that the Tappan student union has drawn up for approval. The date for that meeting at this time is not clear. The FreePeople's Clinic is still working on their next plan of action in relation to the Community-Advisory Board of St. Joe's Hospital. They have discovered however that the city is legally responsible for the medical care of all the brothers and sisters being held in the city and county jails here in Ann Arbor and they plan to put pressure on the city to comply with the law. More on that as it developes. The Radio Workshop is working on putting together a 5 minute show every week and all those people who are currently working on this workshop are going to be taking steps to obtain their third-class F.C.C, radio licenses which would enable them to opérate an FM radio show. Power to the People's Airways! The last point of nformátion concerns the moratorium currently going on at the community center. This moratorium was set up to deter people from simply hanging out in the community center. During the past couple of weeks there have been a lot of meetings with the community people who spend most of their time there and at this point is that the community room does serve a purpose and therefore should not be done away with but possibly made smaller and that people should be encouraged to particípate in any available activities but that they should not be thrown out on the street if they weren't into participating. The latest proposal was drawn up by the C4 committee and two representatives from the street community. We encourage all people to become involved with the community and to work to make it a better place, but we don't feel that people should be discriminated against and that sometimes it just takes some time 'hanging-out' some place or another to get your thing together. We'd rather see people coming together at the community center than hanging out on the street shooting bogus dope and we feel that that particular group from our community is gradually becoming more involved in the same type of work that we're into and we feel that all people must be conscious of struggling together rather than against each other. DEATH TO THE OEATH CULTURE ! ! LIFE TO THE LIFE CULTUREN HELP ITGROW! Council Steering Committee