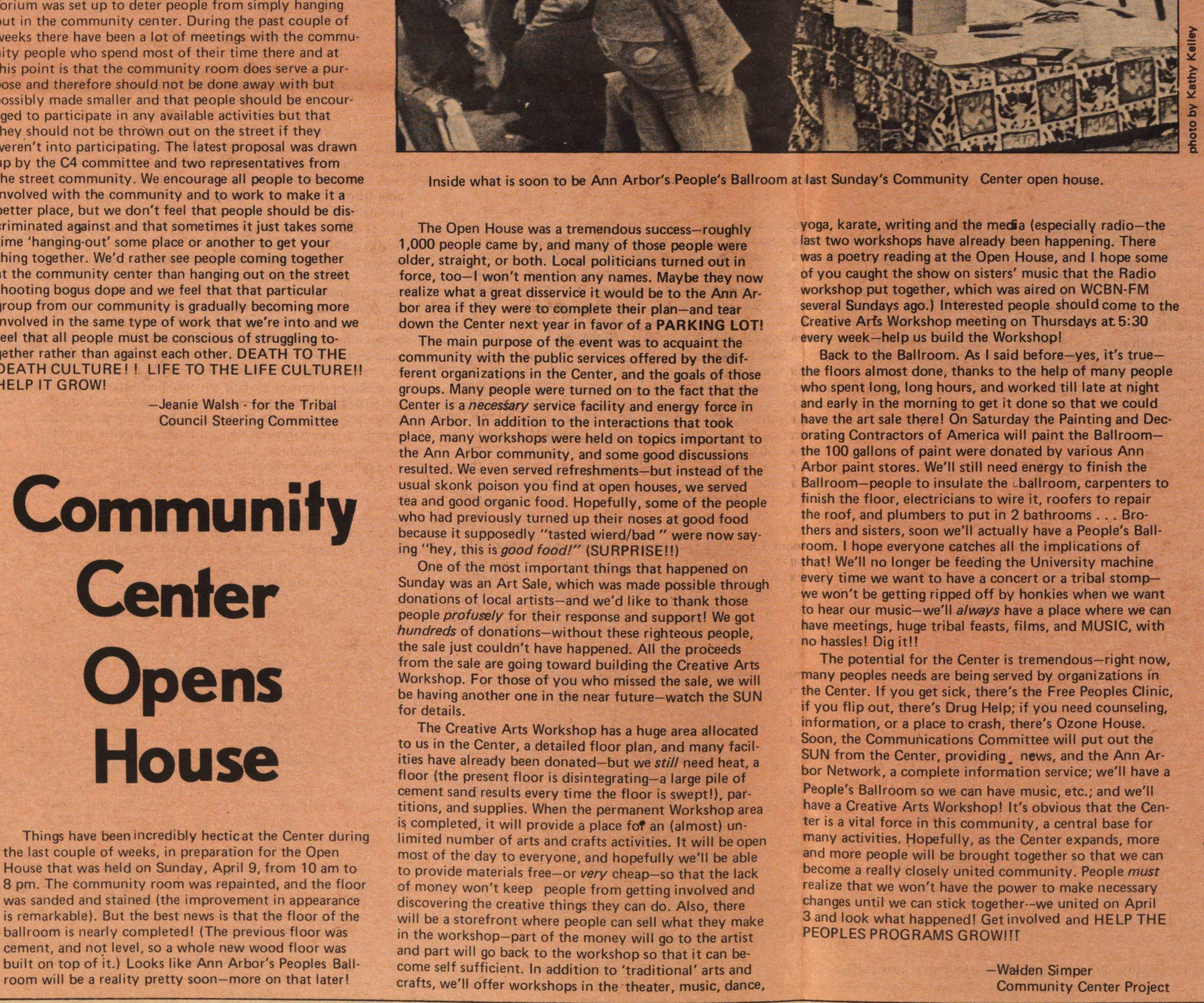 Things have been incredibly hectic at the Center during the last couple of weeks, in preparation for the Open House that was held on Sunday, April 9, from 10 am to 8 pm. The community room was repainted, and the floor was sanded and stained (the improvement in appearance is remarkable). But the best news is that the floor of the ballroom is nearly completed! (The previous floor was cement, and not level, so a whole new wood floor was built on top of it.) Looks like Ann Arbor's Peoples Ballroom will be a reality pretty soon -- more on that later!

The Open House was a tremendous success -- roughly 1,000 people came by, and many of those people were older, straight, or both. Local politicians turned out in force, too -- l won't mention any names. Maybe they now realize what a great disservice it would be to the Ann Arbor area if they were to complete their plan -- and tear down the Center next year in favor of a PARKING LOT!

The main purpose of the event was to acquaint the community with the public services offered by the different organizations in the Center, and the goals of those groups. Many people were turned on to the fact that the Center is a necessary service facility and energy force in Ann Arbor. In addition to the interactions that took place, many workshops were held on topics important to the Ann Arbor community, and some good discussions resulted. We even served refreshments -- but instead of the usual skonk poison you find at open houses, we served tea and good organic food. Hopefully, some of the people who had previously turned up their noses at good food because it supposedly "tasted weird/bad" were now saying "hey, this is good food!" (SURPRISE!!)

One of the most important things that happened on Sunday was an Art Sale, which was made possible through donations of local artists -- and we'd like to thank those people profusely for their response and support! We got hundreds of donations -- without these righteous people, the sale just couldn't have happened. All the proceeds from the sale are going toward building the Creative Arts Workshop. For those of you who missed the sale, we will be having another one in the near future -- watch the SUN for details.

The Creative Arts Workshop has a huge area allocated to us in the Center, a detailed floor plan, and many facilities have already been donated -- but we still need heat, a floor (the present floor is disintegrating -- a large pile of cement sand results every time the floor is swept!), partitions, and supplies. When the permanent Workshop area is completed, it will provide a place for an (almost) unlimited number of arts and crafts activities. It will be open most of the day to everyone, and hopefully we'll be able to provide materials free -- or very cheap -- so that the lack of money won't keep people from getting involved and discovering the creative things they can do. Also, there will be a storefront where people can sell what they make in the workshop -- part of the money will go to the artist and part will go back to the workshop so that it can become self sufficient. In addition to 'traditional' arts and crafts, we'll offer workshops in the theater, music, dance, yoga, karate, writing and the media (especially radio -- the last two workshops have already been happening. There was a poetry reading at the Open House, and I hope some of you caught the show on sisters' music that the Radio workshop put together, which was aired on WCBN-FM several Sundays ago.) Interested people should come to the Creative Arts Workshop meeting on Thursdays at 5:30 every week -- help us build the Workshop!

Back to the Ballroom. As I said before -- yes, it's true -- the floors almost done, thanks to the help of many people who spent long, long hours, and worked till late at night and early in the morning to get it done so that we could have the art sale there! On Saturday the Painting and Decorating Contractors of America will paint the Ballroom -- the 100 gallons of paint were donated by various Ann Arbor paint stores. We'll still need energy to finish the Ballroom -- people to insulate the ballroom, carpenters to finish the floor, electricians to wire it, roofers to repair the roof, and plumbers to put in 2 bathrooms ... Brothers and sisters, soon we'll actually have a People's Ballroom. I hope everyone catches all the implications of that! We'll no longer be feeding the University machine every time we want to have a concert or a tribal stomp -- we won't be getting ripped off by honkies when we want to hear our music -- we'll always have a place where we can have meetings, huge tribal feasts, films, and MUSIC, with no hassles! Dig it!!

The potential for the Center is tremendous -- right now, many peoples needs are being served by organizations in the Center. If you get sick, there's the Free Peoples Clinic, if you flip out, there's Drug Help; if you need counseling, information, or a place to crash, there's Ozone House. Soon, the Communications Committee will put out the SUN from the Center, providing news, and the Ann Arbor Network, a complete information service; we'll have a People's Ballroom so we can have music, etc; and we'll have a Creative Arts Workshop! It's obvious that the Center is a vital force in this community, a central base for many activities. Hopefully, as the Center expands, more and more people will be brought together so that we can become a really closely united community. People must realize that we won't have the power to make necessary changes until we can stick together -- we united on April 3 and look what happened! Get involved and HELP THE PEOPLES PROGRAMS GROW!!

Inside what is soon to be Ann Arbor's People's Ballroom at last Sunday's Community Center Open House.