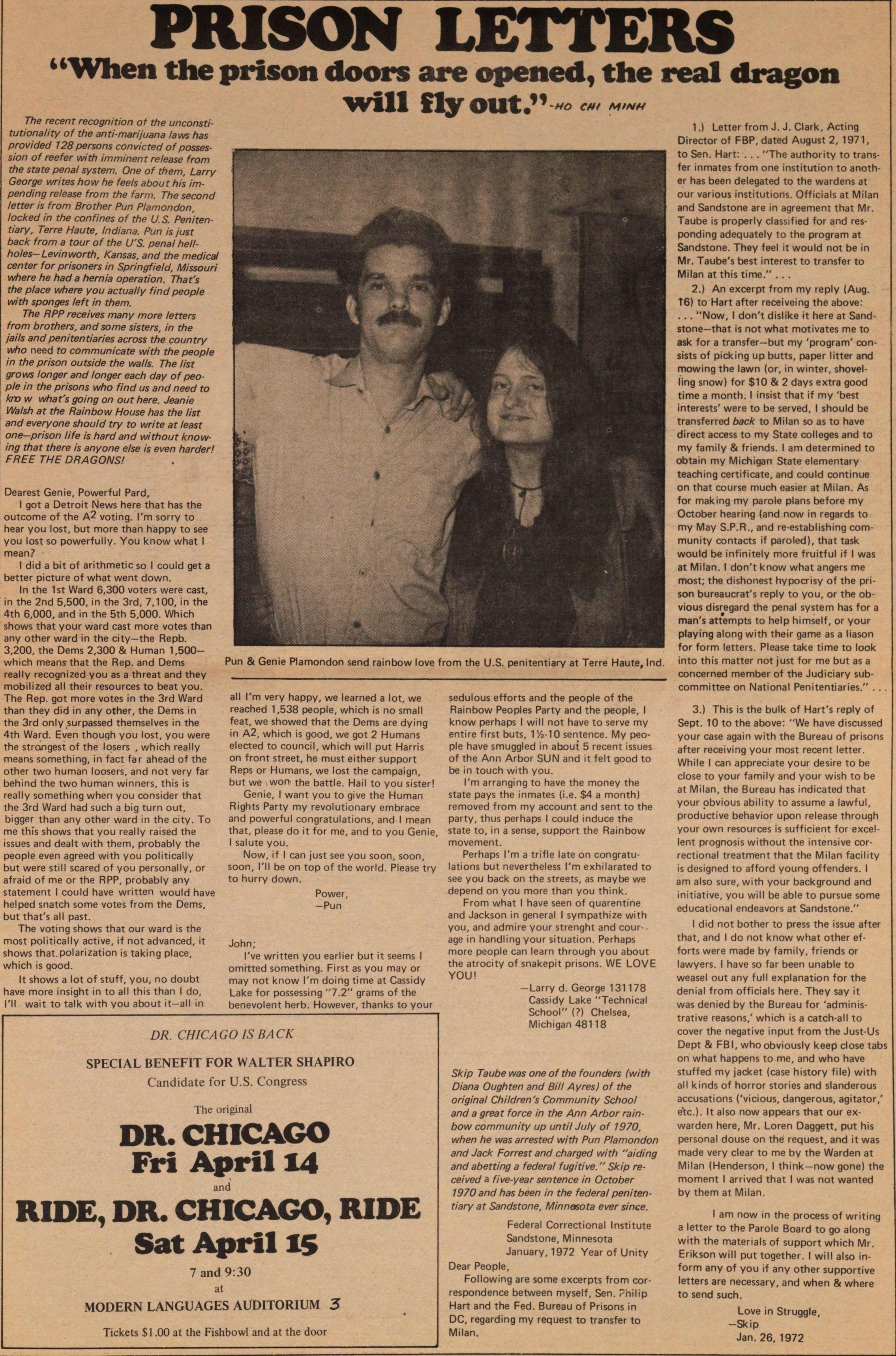 "When the prison doors are opened, the real dragon will fly out." -- Ho Chi Minh

The recent recognition of the unconstitutionality of the anti-marijuana laws has provided 128 persons convicted of possession of reefer with imminent release from the state penal system. One of them, Larry George writes how he feels about his impending release from the farm. The second letter is from Brother Pun Plamondon, locked in the confines of the U.S. Penitentiary, Terre Haute, Indiana. Pun is just back from a tour of the U.S. penal hellholes -- Levinworth, Kansas, and the medical center for prisoners in Springfield, Missouri where he had a hernia operation. That's the place where you actually find people with sponges left in them.

The RPP receives many more letters from brothers, and some sisters, in the jaiIs and penitentiaries across the country who need to communicate with the people in the prison outside the walls. The list grows longer and longer each day of people in the prisons who find us and need to know what's going on out here. Jeanie Walsh at the Rainbow House has the list and everyone should try to write at least one -- prison life is hard and without knowing that there is anyone else is even harder! FREE THE DRAGONS!

I got a Detroit News here that has the outcome of the A2 voting. I'm sorry to hear you lost, but more than happy to see you lost so powerfully. You know what I mean?

I did a bit of arithmetic so I could get a better picture of what went down.

In the 1st Ward 6,300 voters were cast, in the 2nd 5,500, in the 3rd, 7,100, in the 4th 6,000, and in the 5th 5,000. Which shows that your ward cast more votes than any other ward in the city -- the Repb. 3,200, the Dems 2,300 & Human 1,500 -- which means that the Rep. and Dems really recognized you as a threat and they mobilized all their resources to beat you. The Rep. got more votes in the 3rd Ward than they did in any other, the Dems in the 3rd only surpassed themselves in the 4th Ward. Even though you lost, you were the strongest of the losers, which really means something, in fact far ahead of the other two human loosers, and not very far behind the two human winners, this is really something when you consider that the 3rd Ward had such a big turn out, bigger than any other ward in the city. To me this shows that you really raised the issues and dealt with them, probably the people even agreed with you politically but were still scared of you personally, or afraid of me or the RPP, probably any statement I could have written would have helped snatch some votes from the Dems, but that's all past.

The voting shows that our ward is the most politically active, if not advanced, it shows that polarization is taking place, which is good.

It shows a lot of stuff, you, no doubt have more insight in to all this than I do, I'll wait to talk with you about it -- all in all I'm very happy, we learned a lot, we reached 1,538 people, which is no small feat, we showed that the Dems are dying in A2, which is good, we got 2 Humans elected to council, which will put Harris on front street, he must either support Reps or Humans, we lost the campaign, but we won the battle. Hail to you sister!

Genie, I want you to give the Human Rights Party my revolutionary embrace and powerful congratulations, and I mean that, please do it for me, and to you Genie, I salute you.

Now, if I can just see you soon, soon, soon, l'll be on top of the world. Please try to hurry down.

I've written you earlier but it seems I omitted something. First as you may or may not know I'm doing time at Cassidy Lake for possessing "7.2" grams of the benevolent herb. However, thanks to your sedulous efforts and the people of the Rainbow Peoples Party and the people, I know perhaps I will not have to serve my entire first buts, 1 1/2 - 10 sentence. My people have smuggled in about 5 recent issues of the Ann Arbor SUN and it felt good to be in touch with you.

I'm arranging to have the money the state pays the inmates (i.e. $4 a month) removed from my account and sent to the party, thus perhaps I could induce the state to, in a sense, support the Rainbow movement.

Perhaps I'm a trifle late on congratulations but nevertheless I'm exhilarated to see you back on the streets, as maybe we depend on you more than you think.

From what I have seen of quarantine and Jackson in general I sympathize with you, and admire your strength and courage in handling your situation. Perhaps more people can learn through you about the atrocity of snakepit prisons. WE LOVE YOU!

Skip Taube was one of the founders (with Diana Oughten and Bill Ayres) of the original Children's Community School and a great force in the Ann Arbor rainbow community up until July of 1970, when he was arrested with Pun Plamondon and Jack Forrest and charged with "aiding and abetting a federal fugitive." Skip received a five-year sentence in October 1970 and has been in the federal penitentiary at Sandstone, Minnesota ever since.

Following are some excerpts from correspondence between myself, Sen. Philip Hart and the Fed. Bureau of Prisons in DC, regarding my request to transfer to Milan.

1.) Letter from J.J. Clark, Acting Director of FBP, dated August 2, 1971, to Sen. Hart: ... "The authority to transfer inmates from one institution to another has been delegated to the wardens at our various institutions. Officials at Milan and Sandstone are in agreement that Mr. Taube is properly classified for and responding adequately to the program at Sandstone. They feel it would not be in Mr. Taube's best interest to transfer to Milan at this time." ...

2.) An excerpt from my reply (Aug. 16) to Hart after receiving the above: ... "Now, I don't dislike it here at Sandstone -- that is not what motivates me to ask for a transfer -- but my 'program' consists of picking up butts, paper litter and mowing the lawn (or, in winter, shoveling snow) for $10 & 2 days extra good time a month. I insist that if my 'best interests' were to be served, I should be transferred back to Milan so as to have direct access to my State colleges and to my family & friends. I am determined to obtain my Michigan State elementary teaching certificate, and could continue on that course much easier at Milan. As for making my parole plans before my October hearing (and now in regards to my May S.P.R., and re-establishing community contacts if paroled), that task would be infinitely more fruitful if I was at Milan. I don't know what angers me most; the dishonest hypocrisy of the prison bureaucrat's reply to you, or the obvious disregard the penal system has for a man's attempts to help himself, or your playing along with their game as a liaison for form letters. Please take time to look into this matter not just for me but as a concerned member of the Judiciary subcommittee on National Penitentiaries." ...

3.) This is the bulk of Hart's reply of Sept. 10 to the above: "We have discussed your case again with the Bureau of prisons after receiving your most recent letter. While I can appreciate your desire to be close to your family and your wish to be at Milan, the Bureau has indicated that your obvious ability to assume a lawful, productive behavior upon release through your own resources is sufficient for excellent prognosis without the intensive correctional treatment that the Milan facility is designed to afford young offenders. I am also sure, with your background and initiative, you will be able to pursue some educational endeavors at Sandstone."

I did not bother to press the issue after that, and I do not know what other efforts were made by family, friends or lawyers. I have so far been unable to weasel out any full explanation for the denial from officials here. They say it was denied by the Bureau for 'administrative reasons,' which is a catch-all to cover the negative input from the Just-Us Dept & FBI, who obviously keep close tabs on what happens to me, and who have stuffed my jacket (case history file) with all kinds of horror stories and slanderous accusations ('vicious, dangerous, agitator,' etc). It also now appears that our ex-warden here. Mr. Loren Daggett, put his personal douse on the request, and it was made very clear to me by the Warden at Milan (Henderson, I think -- now gone) the moment I arrived that I was not wanted by them at Milan.

I am now in the process of writing a letter to the Parole Board to go along with the materials of support which Mr. Erikson will put together. I will also inform any of you if any other supportive letters are necessary, and when & where to send such.