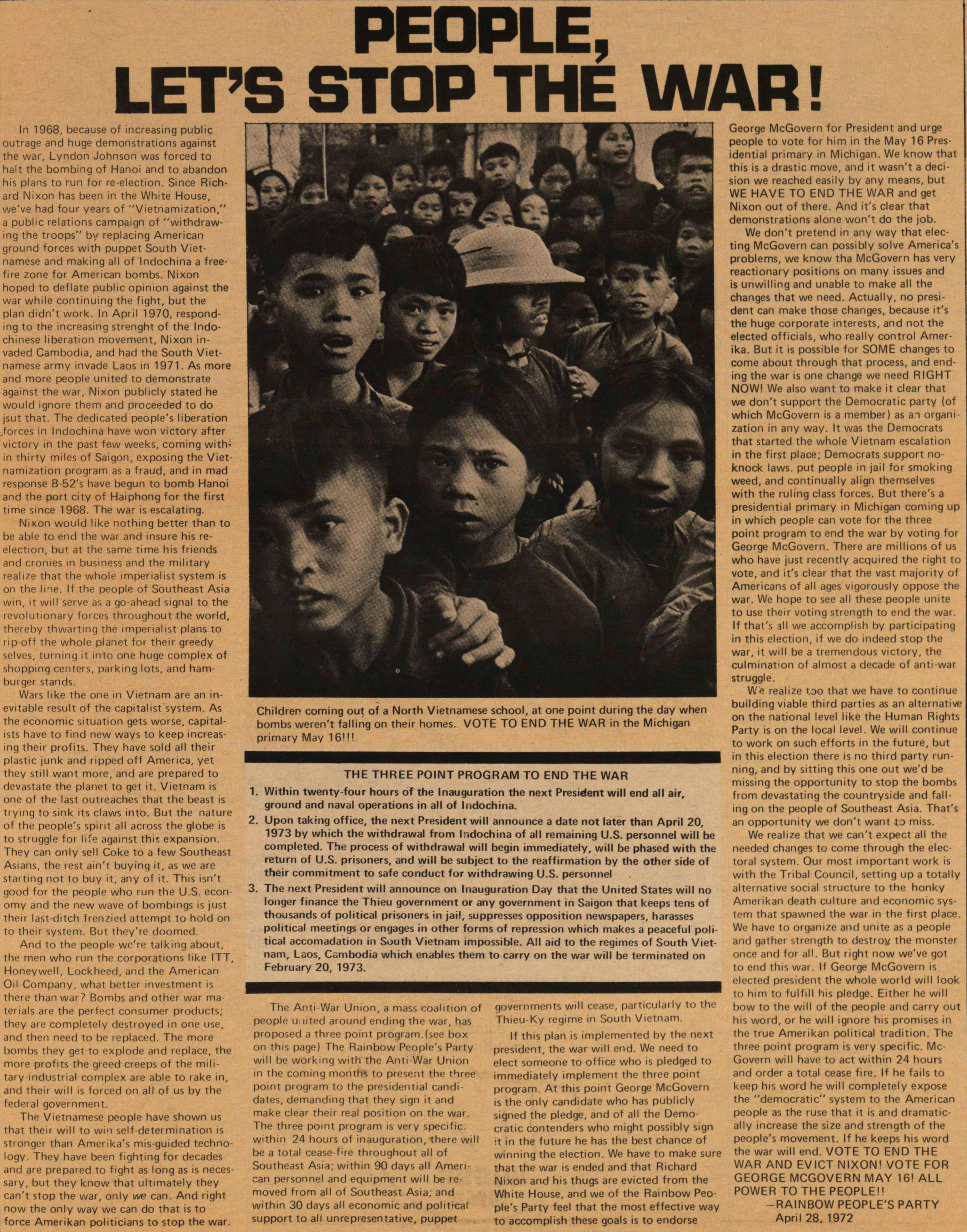 In 1968, because of increasing public outrage and huge demonstrations against the war, Lyndon Johnson was forced to halt the bombing of Hanoi and to abandon his plans to run for re-election. Since Richard Nixon has been in the White House, we've had four years of "Vietnamization," a public relations campaign of "withdrawing the troops" by replacing American ground forces with puppet South Vietnamese and making all of Indochina a freefire zone for American bombs. Nixon hoped to deflate public opinion against the war while continuing the fight, but the plan didn't work. In April 1970, responding to the increasing strenght of the Indochinese liberation movement, Nixon invaded Cambodia, and had the South Vietnamese army invade Laos in 1971. As more and more people united to demonstrate against the war, Nixon publicly stated he would ignore them and proceeded to do jsut that. The dedicated people's liberation forces in Indochina have won victory after victory in the past few weeks, coming with in thirty miles of Saigon, exposing the Vietnamization program as a fraud, and in mad response B-52's have begun to bomb Hanoi and the port city of Haiphong for the first time since 1968. The war is escalating.

Nixon would like nothing better than to be able to end the war and insure his reelection, but at the same time his friends and cronies in business and the military realize that the whole imperialist system is on the line. If the people of Southeast Asia win, it will serve as a go-ahead signal to the revolutionary forces throughout the world, thereby thwarting the imperialist plans to rip-off the whole planet for their greedy selves, turning it into one huge complex of shopping centers, parking lots, and hamburger stands.

Wars like the one in Vietnam are an inevitable result of the capitalist system. As the economic situation gets worse, capitalists have to find new ways to keep increasing their profits. They have sold all their plastic junk and ripped off America, yet they still want more, and are prepared to devastate the planet to get it. Vietnam is one of the last outreaches that the beast is trying to sink its claws into. But the nature of the people's spirit all across the globe is to struggle for life against this expansion. They can only sell Coke to a few Southeast Asians, the rest ain't buying it, as we are starting not to buy it, any of it. This isn't good for the people who run the U.S. economy and the new wave of bombings is just their last-ditch frenzied attempt to hold on to their system. But they're doomed.

And to the people we're talking about, the men who run the corporations like ITT, Honeywell, Lockheed, and the American Oil Company, what better investment is there than war ? Bombs and other war materials are the perfect consumer products; they are completely destroyed in one use, and then need to be replaced. The more bombs they get to explode and replace, the more profits the greed creeps of the military-industrial complex are able to rake in, and their will is forced on all of us by the federal government.

The Vietnamese people have shown us that their will to win self-determination is stronger than Amerika's mis-guided technology. They have been fighting for decades and are prepared to fight as long as is necessary, but they know that ultimately they can't stop the war, only we can. And right now the only way we can do that is to force Amerikan politicians to stop the war. The Anti-War Union, a mass coalition of people united around ending the war, has proposed a three point program. (see box on this page) The Rainbow People's Party will be working with the Anti-War Union in the coming months to present the three point program to the presidential candidates, demanding that they sign it and make clear their real position on the war. The three point program is very specific. within 24 hours of inauguration, there will be a total cease-fire throughout all of Southeast Asia; within 90 days all American personnel and equipment will be removed from all of Southeast Asia; and within 30 days all economic and political support to all unrepresentative, puppet governments will cease, particularly to the Thieu-Ky regime in South Vietnam.

If this plan is implemented by the next president, the war will end. We need to elect someone to office who is pledged to immediately implement the three point program. At this point George McGovern is the only candidate who has publicly signed the pledge, and of all the Democratic contenders who might possibly sign it in the future he has the best chance of winning the election. We have to make sure that the war is ended and that Richard Nixon and his thugs are evicted from the White House, and we of the Rainbow People's Party feel that the most effective way to accomplish these goals is to endorse George McGovern for President and urge people to vote for him in the May 16 Presidential primary in Michigan. We know that this is a drastic move, and it wasn't a decision we reached easily by any means, but WE HAVE TO END THE WAR and get Nixon out of there. And it's clear that demonstrations alone won't do the job.

We don't pretend in any way that electing McGovern can possibly solve America's problems, we know that McGovern has very reactionary positions on many issues and is unwilling and unable to make all the changes that we need. Actually, no president can make those changes, because it's the huge corporate interests, and not the elected officials, who really control Amerika. But it is possible for SOME changes to come about through that process, and ending the war is one change we need RIGHT NOW! We also want to make it clear that we don't support the Democratic party (of which McGovern is a member) as an organization in any way. It was the Democrats that started the whole Vietnam escalation in the first place; Democrats support no-knock laws. put people in jail for smoking weed, and continually align themselves with the ruling class forces. But there's a presidential primary in Michigan coming up in which people can vote for the three point program to end the war by voting for George McGovern. There are millions of us who have just recently acquired the right to vote, and it's clear that the vast majority of Americans of all ages vigorously oppose the war. We hope to see all these people unite to use their voting strength to end the war. If that's all we accomplish by participating in this election, if we do indeed stop the war, it will be a tremendous victory, the culmination of almost a decade of antiwar struggle.

We realize too that we have to continue building viable third parties as an alternative on the national level like the Human Rights Party is on the local level. We will continue to work on such efforts in the future, but in this election there is no third party running, and by sitting this one out we'd be missing the opportunity to stop the bombs from devastating the countryside and falling on the people of Southeast Asia. That's an opportunity we don't want to miss.

We realize that we can't expect all the needed changes to come through the electoral system. Our most important work is with the Tribal Council, setting up a totally alternative social structure to the honky Amerikan death culture and economic system that spawned the war in the first place. We have to organize and unite as a people and gather strength to destroy the monster once and for all. But right now we've got to end this war. If George McGovern is elected president the whole world will look to him to fulfill his pledge. Either he will bow to the will of the people and carry out his word, or he will ignore his promises in the true Amerikan political tradition. The three point program is very specific. McGovern will have to act within 24 hours and order a total cease fire. If he fails to keep his word he will completely expose the "democratic" system to the American people as the ruse that it is and dramatically increase the size and strength of the people's movement. If he keeps his word the war will end. VOTE TO END THE WAR AND EVICT NIXON! VOTE FOR GEORGE MCGOVERN MAY 16! ALL POWER TO THE PEOPLE!!

THE THREE POINT PROGRAM TO END THE WAR

1. Within twenty-four hours of the Inauguration the next President will end all air, ground and naval operations in all of Indochina.

2. Upon taking office, the next President will announce a date not later than April 20, 1973 by which the withdrawal from Indochina of all remaining U.S. personnel will be completed. The process of withdrawal will begin immediately, will be phased with the return of U.S. prisoners, and will be subject to the reaffirmation by the other side of their commitment to safe conduct for withdrawing U.S. personnel

3. The next President will announce on Inauguration Day that the United States will no longer finance the Thieu government or any government in Saigon that keeps tens of thousands of political prisoners in jail, suppresses opposition newspapers, harasses political meetings or engages in other forms of repression which makes a peaceful political accomadation in South Vietnam impossible. All aid to the regimes of South Vietnam, Laos, Cambodia which enables them to carry on the war will be terminated on February 20, 1973.

Photo: Children coming out of a North Vietnamese school, at one point during the day when bombs weren't falling on their homes. VOTE TO END THE WAR in the Michigan primary May 16!!!