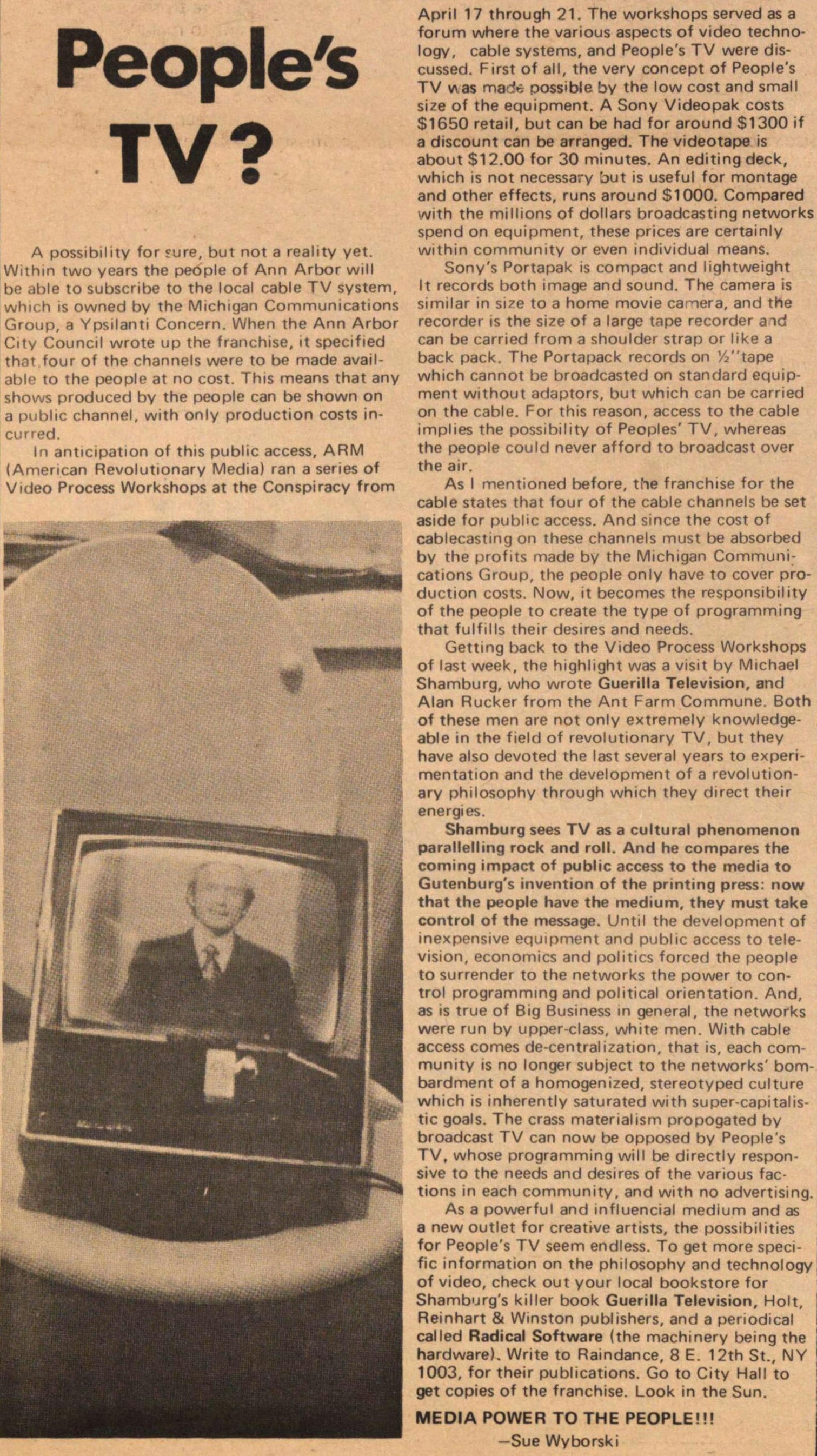 A possibility for sure, but not a reality yet. Within two years the people of Ann Arbor will be able to subscribe to the local cable TV system, which is owned by the Michigan Communications Group, a Ypsilanti Concern. When the Ann Arbor City Council wrote up the franchise, it specified that four of the channels were to be made available to the people at no cost. This means that any shows produced by the people can be shown on a public channel, with only production costs incurred.

In anticipation of this public access, ARM (American Revolutionary Media) ran a series of Video Process Workshops at the Conspiracy from April 17 through 21. The workshops served as a forum where the various aspects of video technology, cable systems, and People's TV were discussed. First of all, the very concept of People's TV was made possible by the low cost and small size of the equipment. A Sony Videopak costs $1650 retail, but can be had for around $1300 if a discount can be arranged. The videotape is about $12.00 for 30 minutes. An editing deck, which is not necessary but is useful for montage and other effects, runs around $1000. Compared with the millions of dollars broadcasting networks spend on equipment, these prices are certainly within community or even individual means.

Sony's Portapak is compact and lightweight It records both image and sound. The camera is similar in size to a home movie camera, and the recorder is the size of a large tape recorder and can be carried from a shoulder strap or like a back pack. The Portapack records on 1/2" tape which cannot be broad-casted on standard equipment without adaptors, but which can be carried on the cable. For this reason, access to the cable implies the possibility of Peoples' TV, whereas the people could never afford to broadcast over the air.

As I mentioned before, the franchise for the cable states that four of the cable channels be set aside for public access. And since the cost of cablecasting on these channels must be absorbed by the profits made by the Michigan Communications Group, the people only have to cover production costs. Now, it becomes the responsibility of the people to create the type of programming that fulfills their desires and needs.

Getting back to the Video Process Workshops of last week, the highlight was a visit by Michael Shamburg, who wrote Guerilla Television, and Alan Rucker from the Ant Farm Commune. Both of these men are not only extremely knowledgeable in the field of revolutionary TV, but they have also devoted the last several years to experimentation and the development of a revolutionary philosophy through which they direct their energies.

Shamburg sees TV as a cultural phenomenon paralleling rock and roll. And he compares the coming impact of public access to the media to Gutenburg's invention of the printing press: now that the people have the medium, they must take control of the message. Until the development of inexpensive equipment and public access to television, economics and politics forced the people to surrender to the networks the power to control programming and political orientation. And, as is true of Big Business in general, the networks were run by upper-class, white men. With cable access comes de-centralization, that is, each community is no longer subject to the networks' bombardment of a homogenized, stereotyped culture which is inherently saturated with super-capitalistic goals. The crass materialism propagated by broadcast TV can now be opposed by People's TV, whose programming will be directly responsive to the needs and desires of the various factions in each community, and with no advertising.

As a powerful and influential medium and as a new outlet for creative artists, the possibilities for People's TV seem endless. To get more specific information on the philosophy and technology of video, check out your local bookstore for Shamburg's killer book Guerilla Television, Holt, Reinhart & Winston publishers, and a periodical called Radical Software (the machinery being the hardware). Write to Raindance, 8 E. 12th St., NY 1003, for their publications. Go to City Hall to get copies of the franchise. Look in the Sun.

MEDIA POWER TO THE PEOPLE!!!