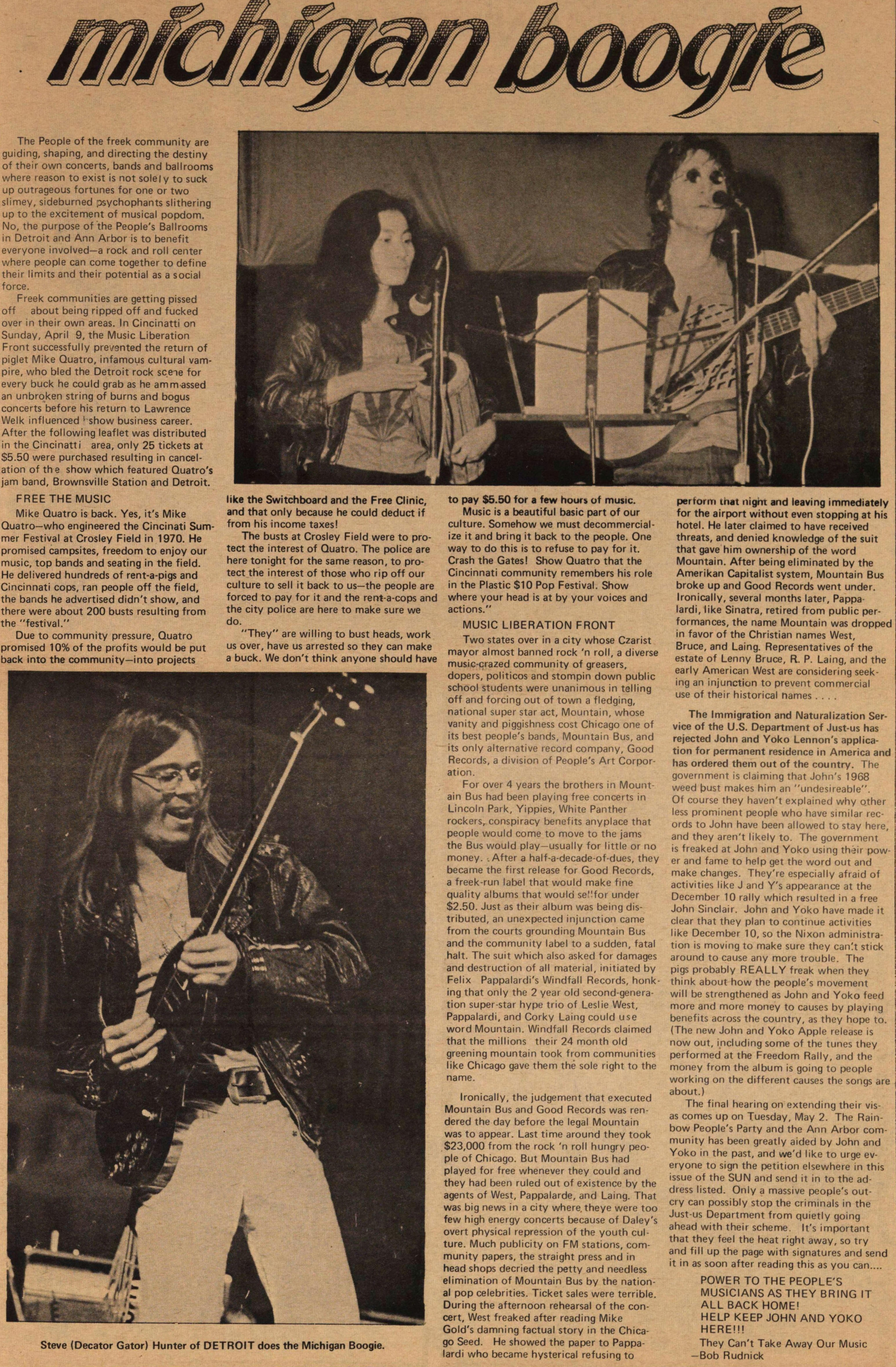 The People of the freek community are guiding, shaping, and directing the destiny of their own concerts, bands and ballrooms where reason to exist is not solely to suck up outrageous fortunes for one or two slimy, sideburned psychophants slithering up to the excitement of musical pop-dom. No, the purpose of the People's Ballrooms in Detroit and Ann Arbor is to benefit everyone involved-- a rock and roll center where people can come together to define their limits and their potential as a social force.

Freek communities are getting pissed off about being ripped off and fucked over in their own areas. In Cincinnati on Sunday, April 9, the Music Liberation Front successfully prevented the return of piglet Mike Quatro, infamous cultural vampire, who bled the Detroit rock scene for every buck he could grab as he amassed an unbroken string of burns and bogus concerts before his return to Lawrence Welk influenced show business career. After the following leaflet was distributed in the Cincinnati area, only 25 tickets at $5.50 were purchased resulting in cancellation of the show which featured Quatro's jam band, Brownsville Station and Detroit.

Mike Quatro is back. Yes, it's Mike Quatro-who engineered the Cincinnati Summer Festival at Crosley Field in 1970. He promised campsites, freedom to enjoy our music, top bands and seating in the field. He delivered hundreds of rent-a-pigs and Cincinnati cops, ran people off the field, the bands he advertised didn't show, and there were about 200 busts resulting from the "festival."

Due to community pressure, Quatro promised 10% of the profits would be put back into the community-- into projects like the Switchboard and the Free Clinic, and that only because he could deduct it from his income taxes!

"They" are willing to bust heads, work us over, have us arrested so they can make a buck. We don't think anyone should have to pay $5.50 tor a few hours of music.

Music s a beautiful basic part of our culture. Somehow we must de-commercialize it and bring it back to the people. One way to do this is to refuse to pay for it. Crash the Gates! Show Quatro that the Cincinnati community remembers his role in the Plastic $10 Pop Festival. Show where your head is at by your voices and actions.

Two states over in a city whose Czarist mayor almost banned rock 'n roll, a diverse music-crazed community of greasers, dopers, politicos and stompin down public school students were unanimous in telling off and forcing out of town a fledgling, national super star act, Mountain, whose vanity and piggishness cost Chicago one of its best people's bands, Mountain Bus, and its only alternative record company, Good Records, a division of People's Art Corporation.

For over 4 years the brothers in Mountain Bus had been playing free concerts in Lincoln Park, Yippies, White Panther rockers, conspiracy benefits anyplace that people would come to move to the jams the Bus would play- usually for little or no money. After a half-a-decade-of-dues, they became the first release for Good Records, a freek-run label that would make fine quality albums that would sell for under $2.50. Just as their album was being distributed, an unexpected injunction came from the courts grounding Mountain Bus and the community label to a sudden, fatal halt. The suit which also asked for damages and destruction of all material, initiated by Felix Pappalardi's Windfall Records, honking that only the 2 year old second-generation superstar hype trio of Leslie West, Pappalardi, and Corky Laing could use word Mountain. Windfall Records claimed that the millions their 24 month old greening mountain took from communities like Chicago gave them the sole right to the name.

Ironically, the judgement that executed Mountain Bus and Good Records was rendered the day before the legal Mountain was to appear. Last time around they took $23,000 from the rock 'n roll hungry people of Chicago. But Mountain Bus had played for free whenever they could and they had been ruled out of existence by the agents of West, Pappalarde, and Laing. That was big news in a city where there were too few high energy concerts because of Daley's overt physical repression of the youth culture. Much publicity on FM stations, community papers, the straight press and in head shops decried the petty and needless elimination of Mountain Bus by the national pop celebrities. Ticket sales were terrible. During the afternoon rehearsal of the concert. West freaked after reading Mike Gold's damning factual story in the Chicago Seed. He showed the paper to Pappalardi who became hysterical refusing to perform that night and leaving immediately for the airport without even stopping at his hotel. He later claimed to have received threats, and denied knowledge of the suit that gave him ownership of the word Mountain. After being eliminated by the Amerikan Capitalist system, Mountain Bus broke up and Good Records went under. Ironically, several months later. Pappalardi, like Sinatra, retired from public performances, the name Mountain was dropped in favor of the Christian names West, Bruce, and Laing. Representatives of the estate of Lenny Bruce, R. P. Laing, and the early American West are considering seeking an injunction to prevent commercial use of their historical names ....

The Immigration and Naturalization Service of the U.S. Department of Just-us has rejected John and Yoko Lennon's application for permanent residence in America and has ordered them out of the country. The government is claiming that John's 1968 weed bust makes him an "undesirable". Of course they haven't explained why other less prominent people who have similar records to John have been allowed to stay here, and they aren't likely to. The government is freaked at John and Yoko using their power and fame to help get the word out and make changes. They're especially afraid of activities like J and Y's appearance at the December 10 rally which resulted in a free John Sinclair. John and Yoko have made it clear that they plan to continue activities like December 10, so the Nixon administration is moving to make sure they can't stick around to cause any more trouble. The pigs probably REALLY freak when they think about how the people's movement will be strengthened as John and Yoko feed more and more money to causes by playing benefits across the country, as they hope to. (The new John and Yoko Apple release is now out, including some of the tunes they performed at the Freedom Rally, and the money from the album is going to people working on the different causes the songs are about.)

The final hearing on extending their visas comes up on Tuesday, May 2. The Rainbow People's Party and the Ann Arbor community has been greatly aided by John and Yoko in the past, and we'd like to urge everyone to sign the petition elsewhere in this issue of the SUN and send it in to the address listed. Only a massive people's outcry can possibly stop the criminals in the Just-us Department from quietly going ahead with their scheme. It's important that they feel the heat right away, so try and fill up the page with signatures and send it in as soon after reading this as you can....

POWER TO THE PEOPLE'S MUSICIANS AS THEY BRING IT ALL BACK HOME! HELP KEEP JOHN AND YOKO HERE!!! They Can't Take Away Our Music

Steve (Decator Gator) Hunter of DETROIT does the Michigan Boogie.