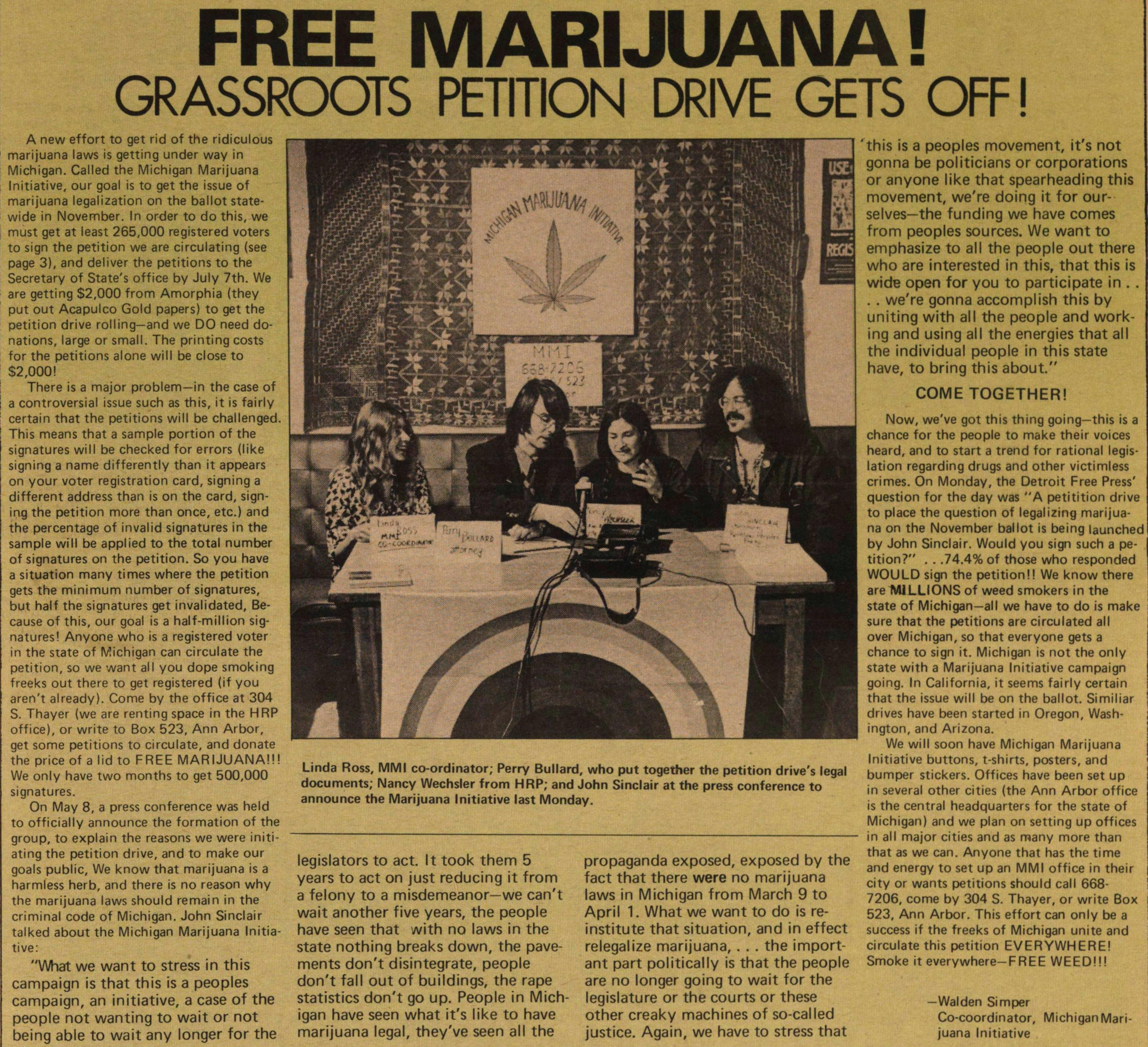 GRASSROOTS PETITION DRIVE GETS OFF!

A new effort to get rid of the ridiculous marijuana laws getting under way in Michigan. Called the Michigan Marijuana Initiative, our goal is to get the issue of marijuana legalization on the ballot statewide in November. In order to do this, we must get at least 265,000 registered voters to sign the petition we are circulating (see page 3), and deliver the petitions to the Secretary of State's office by July 7th. We are getting $2,000 from Amorphia (they put out Acapulco Gold papers) to get the petition drive rolling- and we DO need donations, large or small. The printing costs for the petitions alone will be close to $2,000!

There is a major problem-in the case of a controversial issue such as this, it is fairly certain that the petitions will be challenged. This means that a sample portion of the signatures will be checked for errors (like signing a name differently than it appears on your voter registration card, signing a different address than is on the card, signing the petition more than once, etc.) and the percentage of invalid signatures in the sample will be applied to the total number of signatures on the petition. So you have a situation many times where the petition gets the minimum number of signatures, but half the signatures get invalidated, Because of this, our goal is a half-million signatures! Anyone who is a registered voter in the state of Michigan can circulate the petition, so we want all you dope smoking freeks out there to get registered (if you aren't already). Come by the office at 304 S. Thayer (we are renting space in the HRP office), or write to Box 523, Ann Arbor, get some petitions to circulate, and donate the price of a lid to FREE MARIJUANA!!!  We only have two months to get 500,000 signatures.

On May 8, a press conference was held to officially announce the formation of the group, to explain the reasons we were initiating the petition drive, and to make our goals public. We know that marijuana is a harmless herb, and there is no reason why the marijuana laws should remain in the criminal code of Michigan. John Sinclair talked about the Michigan Marijuana Initiative:

"What we want to stress in this campaign is that this is a peoples campaign, an initiative, a case of the people not wanting to wait or not being able to wait any longer for the legislators to act. It took them 5 years to act on just reducing it from a felony to a misdemeanor- we can't wait another five years, the people have seen that with no laws in the state nothing breaks down, the pavements don't disintegrate, people don't fall out of buildings, the rape statistics don't go up. People in Michigan have seen what it's like to have marijuana legal, they've seen all the propaganda exposed, exposed by the fact that there were no marijuana laws n Michigan from March 9 to April 1. What we want to do is reinstitute that situation, and in effect relegalize marijuana, . . . the important part politically is that the people are no longer going to wait for the legislature or the courts or these other creaky machines of so-called justice. Again, we have to stress that this is a peoples movement, it's not gonna be politicians or corporations or anyone like that spearheading this movement, we're doing it for ourselves- the funding we have comes from peoples sources. We want to emphasize to all the people out there who are interested in this, that this is wide open for you to participate in . . . . we're gonna accomplish this by uniting with all the people and working and using all the energies that all the individual people in this state have, to bring this about."

Now, we've got this thing going- this is a chance for the people to make their voices heard, and to start a trend for rational legislation regarding drugs and other victimless crimes. On Monday, the Detroit Free Press question for the day was "A petition drive to place the question of legalizing marijuana on the November ballot is being launched by John Sinclair. Would you sign such a petition?" . . .74.4% of those who responded WOULD sign the petition!! We know there are MILLIONS of weed smokers in the state of Michigan-all we have to do is make sure that the petitions are circulated all over Michigan, so that everyone gets a chance to sign it. Michigan is not the only state with a Marijuana Initiative campaign going. In California, it seems fairly certain that the issue will be on the ballot. Similar drives have been started in Oregon, Washington, and Arizona. We will soon have Michigan Marijuana Initiative buttons, t-shirts, posters, and bumper stickers. Offices have been set up in several other cities (the Ann Arbor office is the central headquarters for the state of Michigan) and we plan on setting up offices in all major cities and as many more than that as we can. Anyone that has the time and energy to set up an MMI office in their city or wants petitions should call 668-7206, come by 304 S. Thayer, or write Box 523, Ann Arbor. This effort can only be a success if the freeks of Michigan unite and circulate this petition EVERYWHERE! Smoke it everywhere-FREE WEED!!!