Vote For Mcgovern May 16 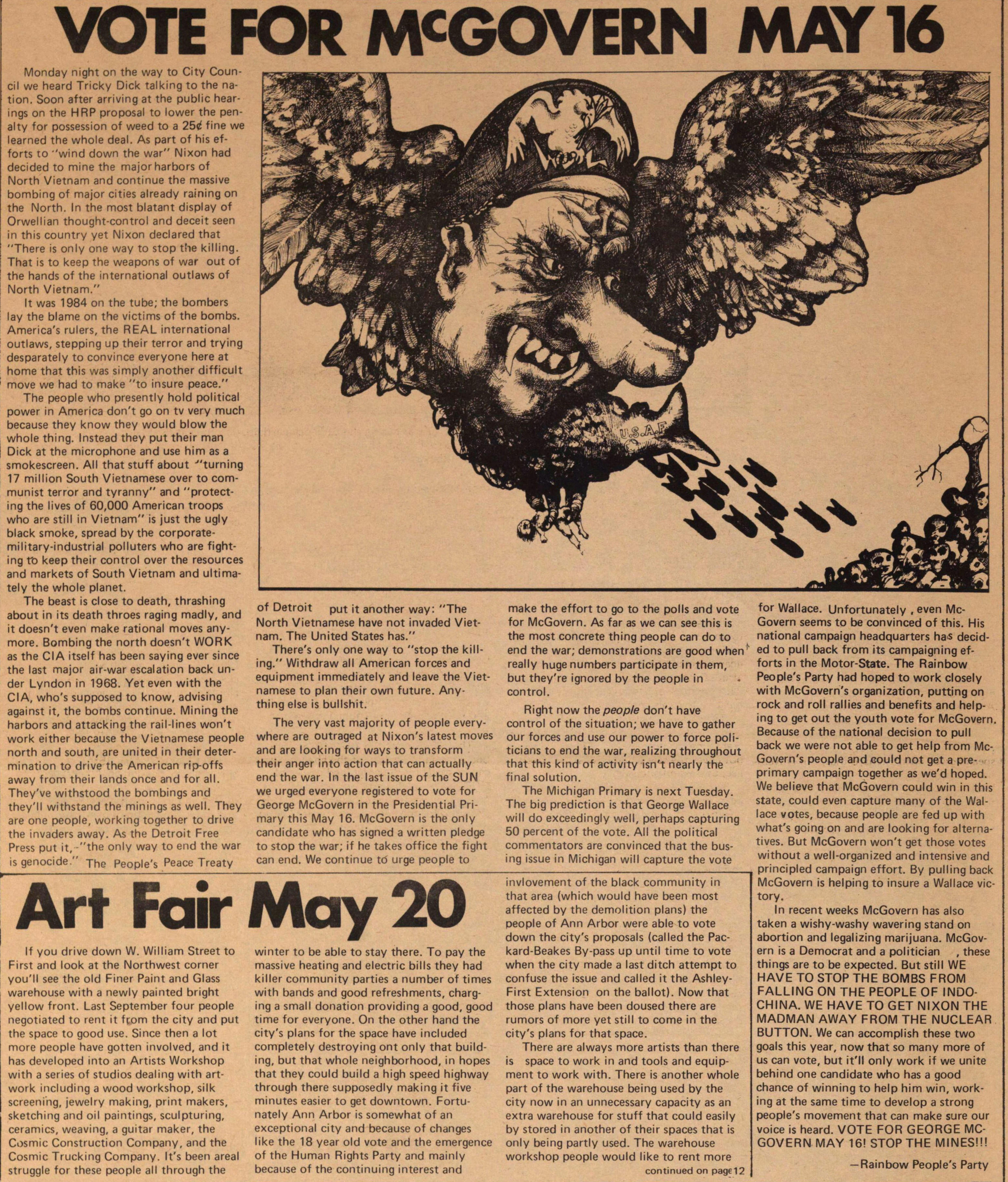 VOTE FOR MCGOVERN MAY 16

Monday night on the way to City Council we heard Tricky Dick talking to the nation. Soon after arriving at the public hearings on the HRP proposal to lower the penalty for possession of weed to a 25 cent fine we learned the whole deal. As part of his efforts to "wind down the war" Nixon had decided to mine the major harbors of North Vietnam and continue the massive bombing of major cities already raining on the North. In the most blatant display of Orwellian thought-control and deceit seen in this country yet Nixon declared that "There is only one way to stop the killing. That is to keep the weapons of war out of the hands of the international outlaws of North Vietnam."

It was 1984 on the tube; the bombers lay the blame on the victims of the bombs. America's rulers, the REAL international outlaws, stepping up their terror and trying desperately to convince everyone here at home that this was simply another difficult move we had to make "to insure peace."

The people who presently hold political power in America don't go on tv very much because they know they would blow the whole thing. Instead they put their man Dick at the microphone and use him as a smokescreen. All that stuff about "turning 17 million South Vietnamese over to communist terror and tyranny" and "protecting the lives of 60,000 American troops who are still in Vietnam" is just the ugly black smoke, spread by the corporate-military-industrial polluters who are fighting to keep their control over the resources and markets of South Vietnam and ultimately the whole planet.

The beast is close to death, thrashing about in its death throes raging madly, and it doesn't even make rational moves anymore. Bombing the north doesn't WORK as the CIA itself has been saying ever since the last major air-war escalation back under Lyndon in 1968. Yet even with the CIA, who's supposed to know, advising against it, the bombs continue. Mining the harbors and attacking the rail-lines won't work either because the Vietnamese people north and south, are united in their determination to drive the American rip-offs away from their lands once and for all. They've withstood the bombings and they'll withstand the minings as well. They are one people, working together to drive the invaders away. As the Detroit Free Press put it, "the only way to end the war is genocide." The People's Peace Treaty of Detroit put it another way: "The North Vietnamese have not invaded Vietnam. The United States has."

There's only one way to "stop the killing." Withdraw all American forces and equipment immediately and leave the Vietnamese to plan their own future. Anything else is bullshit.

The very vast majority of people everywhere are outraged at Nixon's latest moves and are looking for ways to transform their anger into action that can actually end the war. In the last issue of the SUN we urged everyone registered to vote for George McGovern in the Presidential Primary this May 16. McGovern is the only candidate who has signed a written pledge to stop the war; if he takes office the fight can end. We continue to urge people to make the effort to go to the polls and vote for McGovern. As far as we can see this is the most concrete thing people can do to end the war; demonstrations are good when really huge numbers participate in them, but they're ignored by the people in control.

Right now the people don't have control of the situation; we have to gather our forces and use our power to force politicians to end the war, realizing throughout that this kind of activity isn't nearly the final solution.

The Michigan Primary is next Tuesday. The big prediction is that George Wallace will do exceedingly well, perhaps capturing 50 percent of the vote. All the political commentators are convinced that the busing issue in Michigan will capture the vote for Wallace. Unfortunately, even McGovern seems to be convinced of this. His national campaign headquarters has decided to pull back from its campaigning efforts in the Motor-State. The Rainbow People's Party had hoped to work closely with McGovern's organization, putting on rock and roll rallies and benefits and helping to get out the youth vote for McGovern. Because of the national decision to pull back we were not able to get help from McGovern's people and could not get a preprimary campaign together as we'd hoped. We believe that McGovern could win in this state, could even capture many of the Wallace votes, because people are fed up with what's going on and are looking for alternatives. But McGovern won't get those votes without a well-organized and intensive and principled campaign effort. By pulling back McGovern is helping to insure a Wallace victory.

In recent weeks McGovern has also taken a wishy-washy wavering stand on abortion and legalizing marijuana. McGovern is a Democrat and a politician , these things are to be expected. But still WE HAVE TO STOP THE BOMBS FROM FALLING ON THE PEOPLE OF INDOCHINA. WE HAVE TO GET NIXON THE MADMAN AWAY FROM THE NUCLEAR BUTTON. We can accomplish these two goals this year, now that so many more of us can vote, but it'll only work if we unite behind one candidate who has a good chance of winning to help him win, working at the same time to develop a strong people's movement that can make sure our voice is heard. VOTE FOR GEORGE MCGOVERN MAY 16! STOP THE MINES!!!