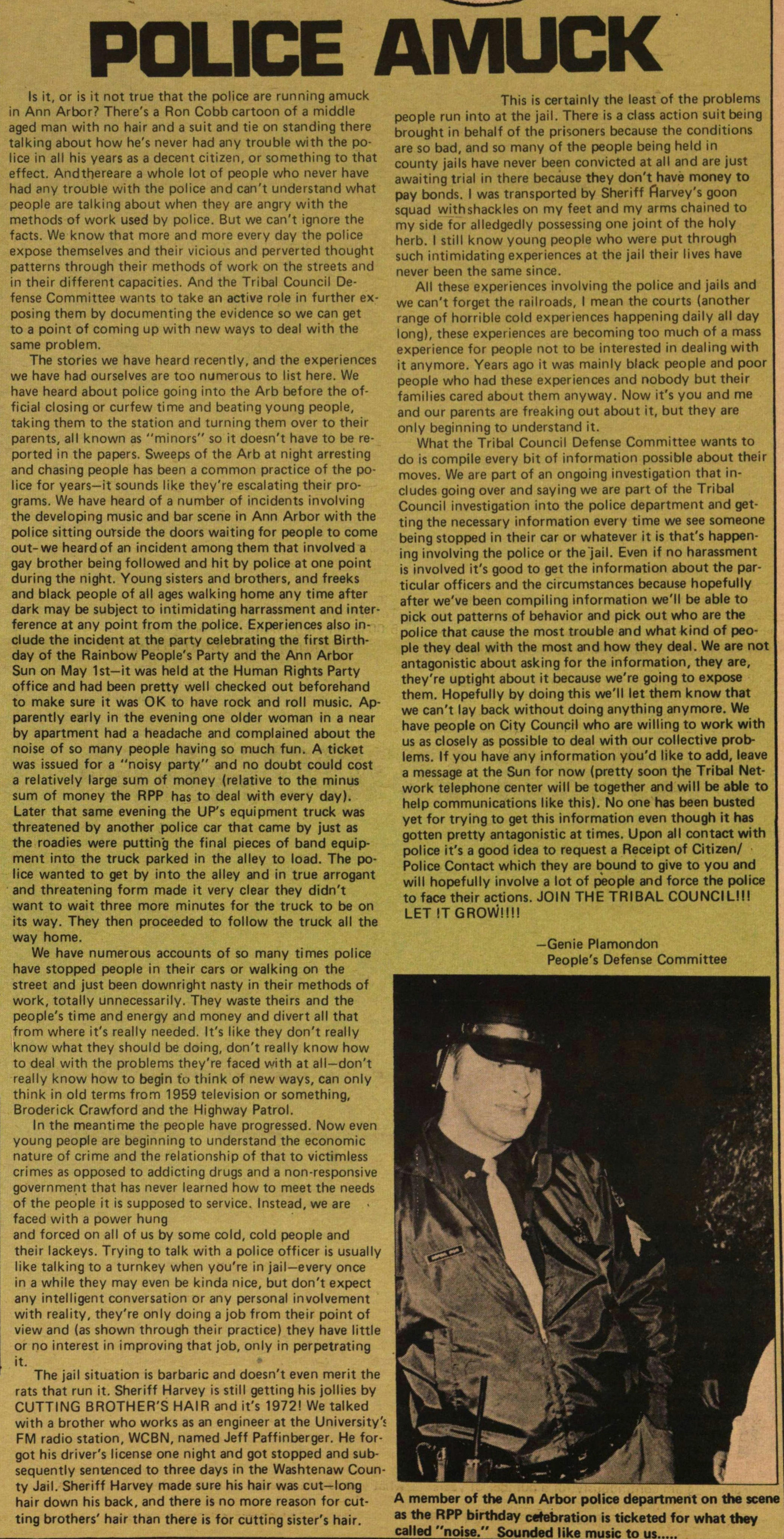 Is it, or is it not true that the police are running amuck in Ann Arbor? There's a Ron Cobb cartoon of a middle aged man with no hair and a suit and tie on standing there talking about how he's never had any trouble with the police in all his years as a decent citizen, or something to that effect. And there are a whole lot of people who never have had any trouble with the police and can't understand what people are talking about when they are angry with the methods of work used by police. But we can't ignore the facts. We know that more and more every day the police expose themselves and their vicious and perverted thought patterns through their methods of work on the streets and in their different capacities. And the Tribal Council Defense Committee wants to take an active role in further exposing them by documenting the evidence so we can get to a point of coming up with new ways to deal with the same problem.

The stories we have heard recently, and the experiences we have had ourselves are too numerous to list here. We have heard about police going into the Arb before the official closing or curfew time and beating young people, taking them to the station and turning them over to their parents, all known as "minors" so it doesn't have to be reported in the papers. Sweeps of the Arb at night arresting and chasing people has been a common practice of the police for years -- it sounds like they're escalating their programs. We have heard of a number of incidents involving the developing music and bar scene in Ann Arbor with the police sitting outside the doors waiting for people to come out -- we heard of an incident among them that involved a gay brother being followed and hit by police at one point during the night. Young sisters and brothers, and freeks and black people of all ages walking home any time after dark may be subject to intimidating harassment and interference at any point from the police. Experiences also include the incident at the party celebrating the first Birthday of the Rainbow People's Party and the Ann Arbor Sun on May 1st -- it was held at the Human Rights Party office and had been pretty well checked out beforehand to make sure it was OK to have rock and roll music. Apparently early in the evening one older woman in a near by apartment had a headache and complained about the noise of so many people having so much fun. A ticket was issued for a "noisy party" and no doubt could cost a relatively large sum of money (relative to the minus sum of money the RPP has to deal with every day). Later that same evening the UP's equipment truck was threatened by another police car that came by just as the roadies were putting the final pieces of band equipment into the truck parked in the alley to load. The police wanted to get by into the alley and in true arrogant and threatening form made it very clear they didn't want to wait three more minutes for the truck to be on its way. They then proceeded to follow the truck all the way home.

We have numerous accounts of so many times police have stopped people in their cars or walking on the street and just been downright nasty in their methods of work, totally unnecessarily. They waste theirs and the people's time and energy and money and divert all that from where it's really needed. It's like they don't really know what they should be doing, don't really know how to deal with the problems they're faced with at all -- don't really know how to begin to think of new ways, can only think in old terms from 1959 television or something, Broderick Crawford and the Highway Patrol.

In the meantime the people have progressed. Now even young people are beginning to understand the economic nature of crime and the relationship of that to victimless crimes as opposed to addicting drugs and a non-responsive government that has never learned how to meet the needs of the people it is supposed to service. Instead, we are faced with a power hung and forced on all of us by some cold, cold people and their lackeys. Trying to talk with a police officer is usually like talking to a turnkey when you're in jail- every once in a while they may even be kinda nice, but don't expect any intelligent conversation or any personal involvement with reality, they're only doing a job from their point of view and (as shown through their practice) they have little or no interest in improving that job, only in perpetrating it.

The jail situation is barbaric and doesn't even merit the rats that run it. Sheriff Harvey is still getting his jollies by CUTTING BROTHER'S HAIR and it's 1972! We talked with a brother who works as an engineer at the University's FM radio station, WCBN, named Jeff Paffinberger. He forgot his driver's license one night and got stopped and subsequently sentenced to three days in the Washtenaw County Jail. Sheriff Harvey made sure his hair was cut -- long hair down his back, and there is no more reason for cutting brothers' hair than there is for cutting sister's hair.

This is certainly the least of the problems people run into at the jail. There is a class action suit being brought on behalf of the prisoners because the conditions are so bad, and so many of the people being held in county jails have never been convicted at all and are just awaiting trial in there because they don't have money to pay bonds. I was transported by Sheriff Harvey's goon squad with shackles on my feet and my arms chained to my side for allegedly possessing one joint of the holy herb. I still know young people who were put through such intimidating experiences at the jail their lives have never been the same since.

All these experiences involving the police and jails and we can't forget the railroads, I mean the courts (another range of horrible cold experiences happening daily all day long), these experiences are becoming too much of a mass experience for people not to be interested in dealing with it anymore. Years ago it was mainly black people and poor people who had these experiences and nobody but their families cared about them anyway. Now it's you and me and our parents are freaking out about it, but they are only beginning to understand it.

What the Tribal Council Defense Committee wants to do is compile every bit of information possible about their moves. We are part of an ongoing investigation that includes going over and saying we are part of the Tribal Council investigation into the police department and getting the necessary information every time we see someone being stopped in their car or whatever it is that's happening involving the police or the jail. Even if no harassment is involved it's good to get the information about the particular officers and the circumstances because hopefully after we've been compiling information we'll be able to pick out patterns of behavior and pick out who are the police that cause the most trouble and what kind of people they deal with the most and how they deal. We are not antagonistic about asking for the information, they are, they're uptight about it because we're going to expose them. Hopefully by doing this we'll let them know that we can't lay back without doing anything anymore. We have people on City Council who are willing to work with us as closely as possible to deal with our collective problems. If you have any information you'd like to add, leave a message at the Sun for now (pretty soon the Tribal Network telephone center will be together and will be able to help Communications like this). No one has been busted yet for trying to get this information even though it has gotten pretty antagonistic at times. Upon all contact with police it's a good idea to request a Receipt of Citizen Police Contact which they are bound to give to you and will hopefully involve a lot of people and force the police to face their actions. JOIN THE TRIBAL COUNCIL!!! LET IT GROW!!!!

A member of the Ann Arbor police department on the scene as the RPP birthday celebration is ticketed for what they called "noise." Sounded like music to us ...