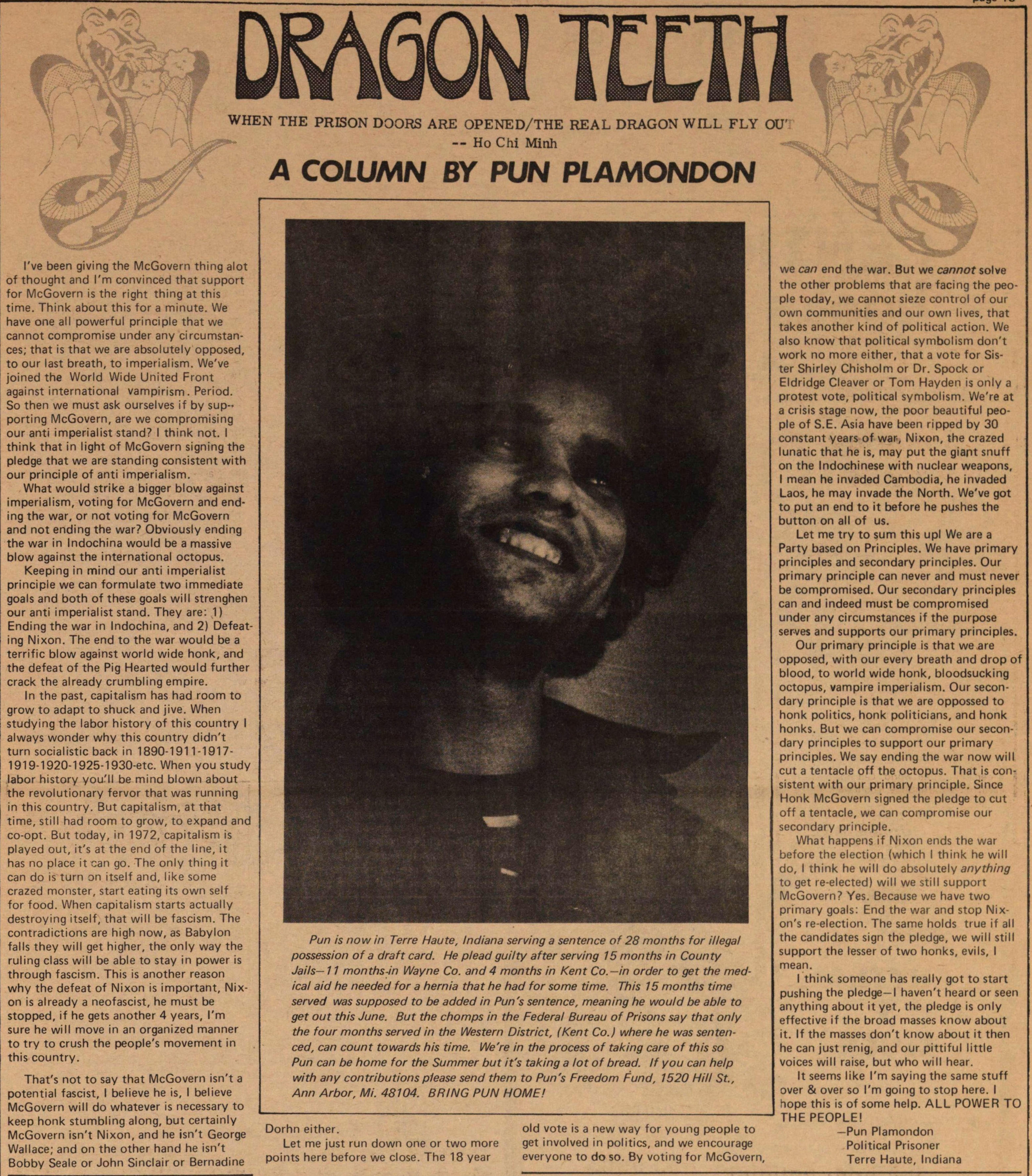 A COLUMN BY PUN PLAMONDON

I've been giving the McGovern thing alot of thought and l'm convinced that support for McGovern is the right thing at this time. Think about this for a minute. We have one all powerful principle that we cannot compromise under any circumstances; that is that we are absolutely opposed, to our last breath, to imperialism. We've joined the World Wide United Front against international vampirism. Period. So then we must ask ourselves if by supporting McGovern, are we compromising our anti imperialist stand? I think not. I think that in light of McGovern signing the pledge that we are standing consistent with our principle of anti imperialism.

Keeping in mind our anti imperialist principle we can formulate two immediate goals and both of these goals will strenghen our anti imperialist stand. They are: 1 ) Ending the war in Indochina, and 2) Defeating Nixon. The end to the war would be a terrific blow against world wide honk, and the defeat of the Pig Hearted would further crack the already crumbling empire.

In the past, capitalism has had room to grow to adapt to shuck and jive. When studying the labor history of this country I always wonder why this country didn't turn socialistic back in 1890-1911-1917-1919-1920-1925-1930-etc. When you study labor history you'll be mind blown about the revolutionary fervor that was running in this country. But capitalism, at that time, still had room to grow, to expand and co-opt. But today, in 1972, capitalism is played out, it's at the end of the line, it has no place it can go. The only thing it can do is turn on itself and, like some crazed monster, start eating its own self for food. When capitalism starts actually destroying itself, that will be fascism. The contradictions are high now, as Babylon falls they will get higher, the only way the ruling class will be able to stay in power is through fascism. This is another reason why the defeat of Nixon is important, Nixon is already a neofascist, he must be stopped, if he gets another 4 years, l'm sure he will move in an organized manner to try to crush the people's movement in this country.

That's not to say that McGovern isn't a potential fascist, I believe he is, I believe McGovern will do whatever is necessary to keep honk stumbling along, but certainly McGovern isn't Nixon, and he isn't George Wallace; and on the other hand he isn't Bobby Seale or John Sinclair or Bernadine Dorhn either.

Let me just run down one or two more points here before we close. The 18 year old vote is a new way for young people to get involved in politics, and we encourage everyone to do so. By voting for McGovern, we can end the war. But we cannot solve the other problems that are facing the people today, we cannot sieze control of our own communities and our own lives, that takes another kind of political action. We also know that political symbolism don't work no more either, that a vote for Sister Shirley Chisholm or Dr. Spock or Eldridge Cleaver or Torn Hayden is only a protest vote, political symbolism. We're at a crisis stage now, the poor beautiful people of S.E. Asia have been ripped by 30 constant years of war, Nixon, the crazed lunatic that he is, may put the giant snuff on the Indochinese with nuclear weapons, I mean he invaded Cambodia, he invaded Laos, he may invade the North. We've got to put an end to it before he pushes the button on all of us.

What happens if Nixon ends the war before the election (which I think he will do, I think he will do absolutely anything to get re-elected) will we still support McGovern? Yes. Because we have two primary goals: End the war and stop Nixon's re-election. The same holds true if all the candidates sign the pledge, we will still support the lesser of two honks, evils, I mean. I think someone has really got to start pushing the pledge- I haven't heard or seen anything about it yet, the pledge is only effective if the broad masses know about it. If the masses don't know about it then he can just renig, and our pittiful little voices will raise, but who will hear.

It seems like l'm saying the same stuff over & over so l'm going to stop here. I hope this is of some help. ALL POWER TO THE PEOPLE!