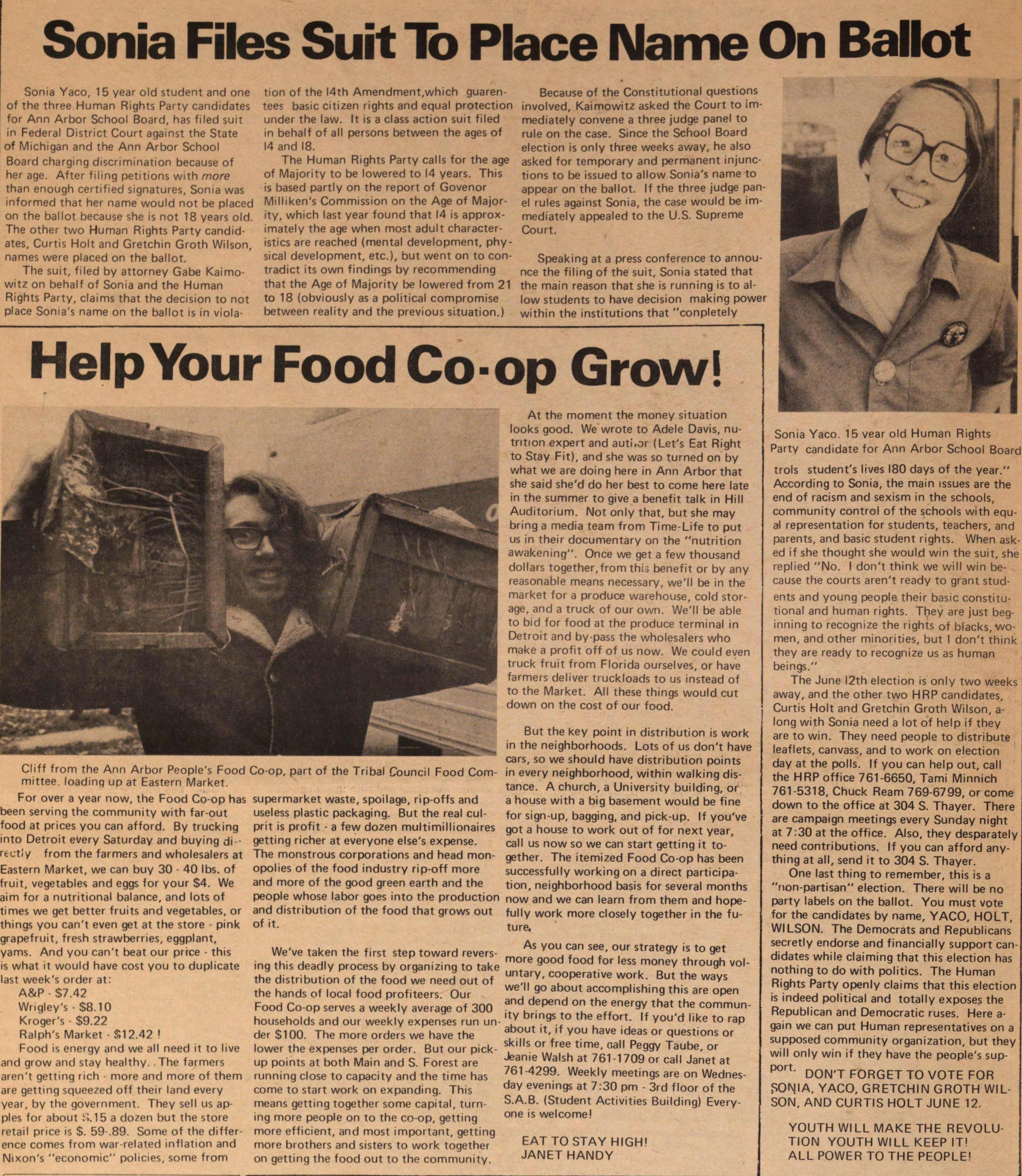 Sonia Yaco, 15 year oíd student and one of the three Human Rights Party candidates for Ann Arbor School Board, has f i led suit in Federal District Court against the State of Michigan and the Ann Arbor School Board charging discrimination because of her age. After filing petitions with more than enough certified signatures, Sonia was informed that her name would not be placed on the ballot because she is not 18 years old. The other two Human Rights Party candidates, Curtis Holt and Gretchin Groth Wilson, ñames were placed on the ballot. The suit, filed by attorney Gabe Kaimowitz on behalf of Sonia and the Human Rights Party, claims that the decisión to not place Sonia's name on the ballot is in tion of the I4th Amendment.which guarentees basic citizen rights and equal protection under the law. It s a class action suit filed in behalf of all persons between the ages of 14 and 18. The Human Rights Party calis for the age of Majority to be lowered to 14 years. This is based partly on the report of Govenor Milliken's Commission on the Age of Majority, which last year found that 14 is approximately the age when most adult characteristics are reached (mental development, physical development, etc), but went on to contradict its own findings by recommending that the Age of Majority be lowered from 21 to 18 (obviously as a political compromise between reality and the previous situation.) Because of the Constitutional questions nvolved, Kaimowitz asked the Court to mmediately convene a three judge panel to rule on the case. Since the School Board election is only three weeks away, he also asked for temporary and permanent injunctions to be ssued to allow Sonia's name to appear on the ballot. If the three judge panel rules against Sonia, the case would be mmediately appealed to the U.S. Supreme Court. Speaking at a press conference to announce the filing of the suit, Sonia stated that the main reason that she s running is to allow students to have decisión making power within the institutions that "conpletely Soma Yaco. 15 vear oíd Human Rights Party candidate for Ann Arbor School Board trols student's lives I80 days of the year." According to Sonia, the main issues are the end of racism and sexism n the schools, community control of the schools with equal representaron for students, teachers, and parents, and basic student rights. When ask ed f she thought she would win the suit, she replied "No. I don't think we will win because the courts aren't ready to grant students and young people their basic constitutional and human rights. They are just beginning to recognize the rights of blacks,women, and other minorities, but I don't think they are ready to recognize us as human beings." The June I2th election is only two weeks away, and the other two HRP candidates, Curtis Holt and Gretchin Groth Wilson, along with Sonia need a lot of help if they are to win. They need people to distribute leaflets, canvass, and to work on election day at the polls. If you can help out, cali the HRP office 761-6650, Tami Minnich 761-5318, Chuck Ream 769-6799, or come down to the office at 304 S. Thayer. There are campaign meetings every Sunday night at 7:30 at the office. Also, they desparately need contributions. If you can afford anything at all, send it to 304 S. Thayer. One last thing to remember, this is a "non-partisan" election. There will be no party labels on the ballot. You must vote for the candidates by name, YACO, HOLT, WILSON. The Democrats and Republicans secretly endorse and financially support candidates while claiming that this election has nothing to do with politics. The Human Rights Party openly claims that this election is indeed political and totally exposes the Republican and Democratie ruses. Here again we can put Human representatives on a supposed community organization, but they will only win if they have the people's supPort- DON'T FORGETTO VOTE FOR SONIA, YACO, GRETCHIN GROTH WILSON, AND CURTIS HOLT JUNE 12. YOUTH WILL MAKE THE REVOLUTION YOUTH WILL KEEP IT! ALL POWER TO THE PEOPLE!