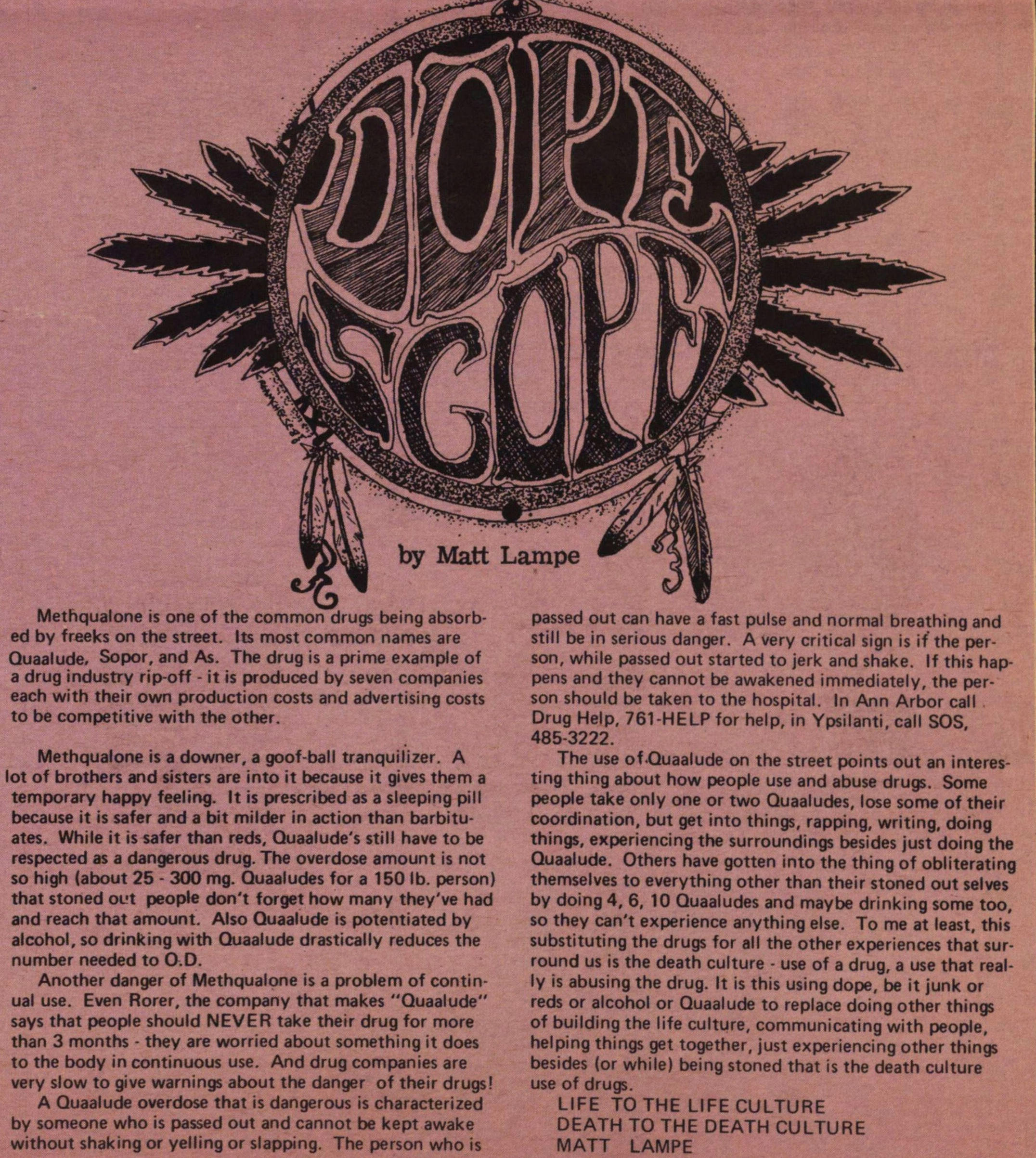 Methqualone is one of the common drugs being absorbed by freeks on the street. Its most common names are Quaalude. Sopor, and As. The drug is a prime example of a drug industry rip-off - it is produced by seven companies each with their own production costs and advertising costs to be competitive with the other.

Methqualone is a downer, a goof-ball tranquilizer. A lot of brothers and sisters are into it because it gives them a temporary happy feeling. It is prescribed as a sleeping pill because it is safer and a bit milder in action than barbituates. White it is safer than reds, Quaalude's still have to be respected as a dangerous drug. The overdose amount is not so high (about 25 - 300 mg. Quaaludes for a 150 Ib. person) that stoned out people don't forget how many they've had and reach that amount. Also Quaalude is potentiated by alcohol, so drinking with Quaalude drastically reduces the number needed to O.D.

Another danger of Methqualone is a problem of continual use. Even Rorer, the company that makes "Quaalude" says that people should NEVER take their drug for more than 3 months - they are worried about something it does to the body in continuous use. And drug companies are very slow to give warnings about the danger of their drugs!

A Quaalude overdose that is dangerous is characterized by someone who is passed out and cannot be kept awake without shaking or yelling or slapping. The person who is passed out can have a fast pulse and normal breathing and still be in serious danger. A very critical sign is if the person, while passed out started to jerk and shake. If this happens and they cannot be awakened immediately, the person should be taken to the hospital. In Ann Arbor call Drug Help, 761-HELP for help, in Ypsilanti call SOS 485-3222.

The use of Quaalude on the street points out an interesting thing about how people use and abuse drugs. Some people take only one or two Quaaludes, lose some of their coordination, but get into things, rapping, writing, doing things, experiencing the surroundings besides just doing the Quaalude. Others have gotten into the thing of obliterating themselves to everything other than their stoned out selves by doing 4, 6, 10 Quaaludes and maybe drinking some too, so they can't experience anything else. To me at least, this substituting the drugs for all the other experiences that surround us is the death culture - use of a drug, a use that really is abusing the drug. It is this using dope, be it junk or reds or alcohol or Quaalude to replace doing other things of building the life culture, communicating with people, helping things get together, just experiencing other things besides (or while) being stoned that is the death culture use of drugs.