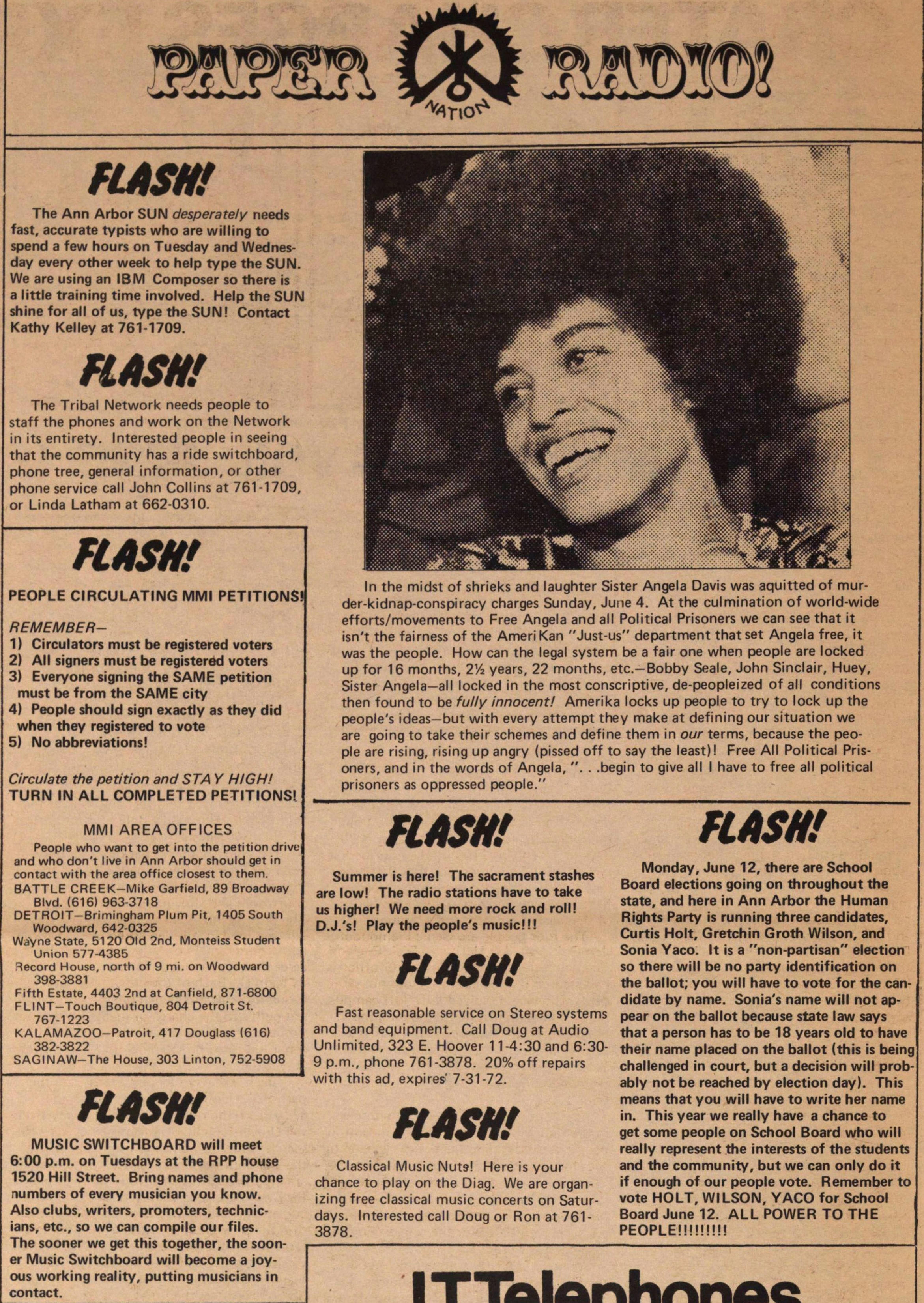 The Ann Arbor SUN despera tey needs fast, accurate typists who are willing to spend a few hours on Tuesday and Wednesday every other week to help type the SUN. We are using an IBM Composer so there is a little training time involved. Help the SUN shine for all of us, type the SUN! Contact Kathy Kelley at 761-1709. FLASH! The Tribal Network needs people to staff the phones and work on the Network in ts entirety. Interested people n seeing that the community has a ride switchboard, phone tree, general information, or other phone service cali John Collins at 761-1709, or Linda Latham at 662-0310. FLASH! PEOPLE CIRCULATING MMI PETITIONS! REMEMBER1) Circulators must be registered voters 2) All signers must be registered voters 3) Everyone signing the SAME petition must be f rom the SAME city 4) People should sign exactly as they did when they registered to vote 5) No abbreviations! Circuíate the petition and STA Y HIGH! TURN IN ALL COMPLETED PETITIONS! MMI AREA OFFICES People who want to get into the petition drive and who don't live in Ann Arbor should get in contact with the area office closest to them. BATTLE CREEK-Mike Garfield, 89 Broadway Blvd. (616) 963-3718 DETROIT-Brimingham Plum Pit, 1405 South Woodward, 642-0325 Wáyne State, 5120 Old 2nd, Monteiss Student Union 577-4385 Record House, north of 9 mi. on Woodward 398-3881 Fifth Estáte, 4403 2nd at Canfield, 871-6800 FLINT-Touch Boutique, 804 Detroit St. 767-1223 KALAMAZOO-Patroit, 417 Douglass (616) 382-3822 SAGINAW-The House, 303 Linton, 752-5908 FLASH! MUSIC SWITCHBOARD will meet 6:00 p.m. on Tuesdays at the RPP house 1520 Hill Street. Bring names and phone numbers of every musician you know. Also clubs, writers, promoters, technicians, etc., so we can compile our files. The sooner we get this together, the sooner Music Switchboard will become a joyous working reality, putting musicians in contact. flashí Summer is here! The sacrament stashes are low! The radio stations have to take us higher! We need more rock and rol I! D.J.'s! Play the people's musici! ! FLASH! Fast reasonable service on Stereo systems and band equipment. Cali Doug at Audio Unlimited, 323 E. Hoover 1 1-4:30 and 6:309 p.m., phone 761-3878. 20% off repairs with this ad, expires' 7-31-72. FLASH! Classical Music Nuts! Here is your chance to play on the Diag. We are organzing free classical music concerts on Saturdays. Interested cali Doug or Ron at 7613878. FLASH! Monday, June 12, there are School Board elections going on throughout the state, and here in Ann Arbor the Human Rights Party is running three candidates. Curtís Holt, Gretchin Groth Wilson, and Sonia Yaco. It is a "non-partisan" election so there will be no party dentif ication on the ballot; you will have to vote for the candidate by name. Sonia's name will not appear on the ballot because state law says that a person has to be 18 years old to have their name placed on the ballot (this is being challenged in court, but a decisión will probably not be reached by election day). This means that you will have to write her name in. This year we really have a chance to get some people on School Board who will really represent the interests of the students and the community, but we can only do it if enough of our people vote. Remember to vote HOLT, WILSON, YACO for School Board June 12. ALL POWER TO THE PEOPLE!!!!!!!!! In the midst of shrieks and laughter Sister Angela Davis was aquitted of murder-kidnap-conspiracy charges Sunday, June 4. At the culmination of world-wide effortsmovements to Free Angela and all Political Prisoners we can see that it sn't the fairness of the AmeriKan "Just-us" department that set Angela free, t was the people. How can the legal system be a fair one when people are locked up for 16 months, 212 years, 22 months, etc.-Bobby Seale, John Sinclair, Huey, Sister Angela-all locked in the most conscriptive, de-peopleized of all conditions then found to be fully innocent! Amerika locks up people to try to lock up the people's ideas- but with every attempt they make at defining our situation we are going to take their schemes and define them in our terms, because the people are rising, rising up angry (pissed off to say the least)! Free All Political Prisoners, and in the words of Angela, ". . .begin to give all I have to free all political prisoners as oppressed people."