The Sun Is Moving! 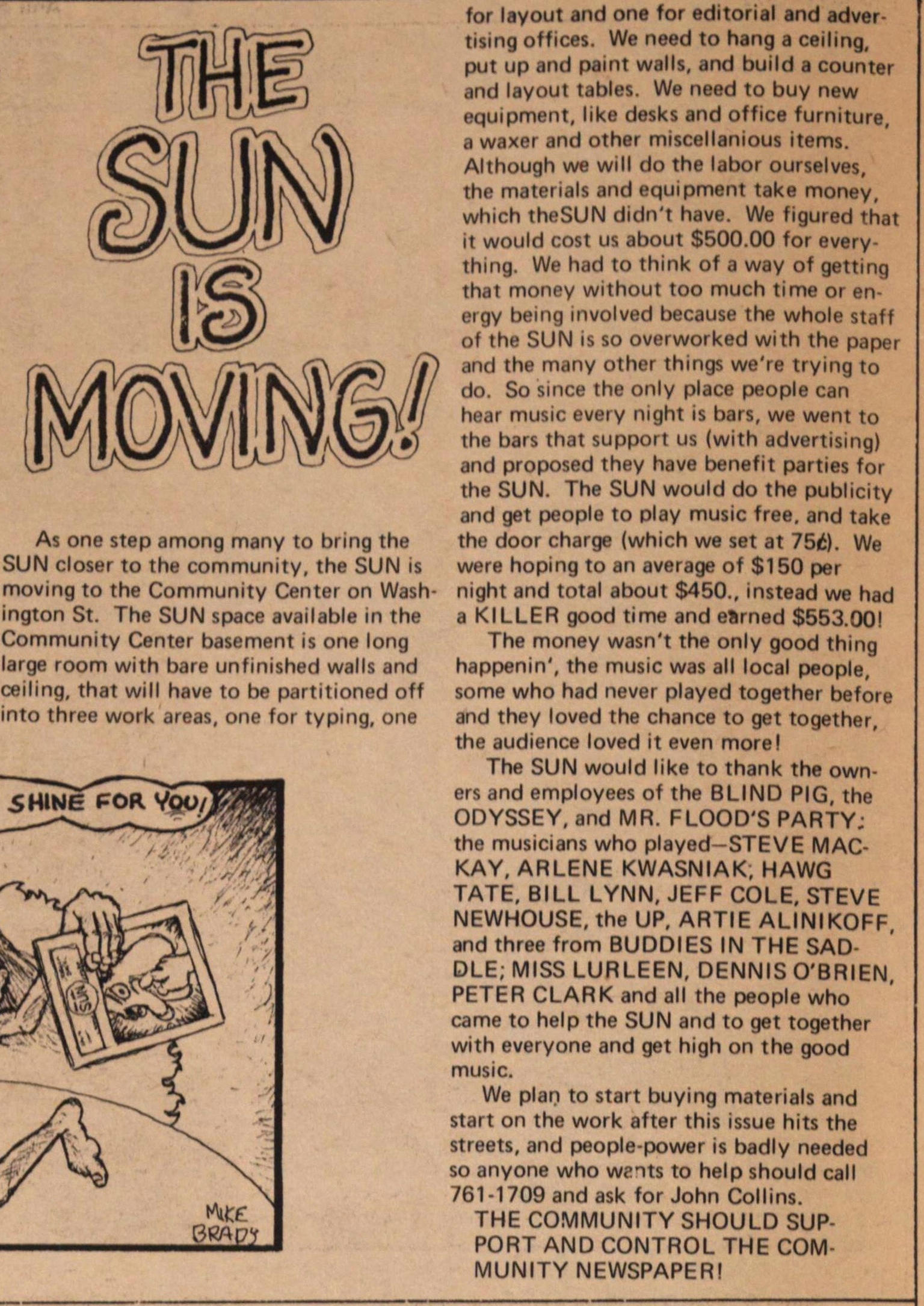 As one step among many to bring the SUN closer to the community, the SUN s moving to the Community Center on Washington St. The SUN space available in the Community Center basement is one long large room with bare unfinished walls and ceiling, that will have to be partitioned off into three work areas, one for typing, one for layout, and one for editorial and advertising offices. We need to hang a ceiling, put up and paint walls, and build a counter and layout tables. We need to buy new equipment, like desks and office furniture, a waxer, and other miscellaneous items. Although we will do the labor ourselves, the materials and equipment take money, which the SUN didn't have. We figured that it would cost us about $500.00 for everything. We had to think of a way of getting that money without too much time or energy being involved because the whole staff of the SUN is so overworked with the paper and the many other things we're trying to do. So since the only place people can hear music every night is bars, we went to the bars that support us (with advertising) and proposed they have benefit parties for the SUN. The SUN would do the publicity and get people to play music free, and take the door charge (which we set at 75¢). We were hoping to an average of $150 per night and total about $450., instead we had a KILLER good time and earned $553.00!

The money wasn't the only good thing happenin', the music was all local people, some who had never played together before and they loved the chance to get together, the audience loved it even more! The SUN would like to thank the owners and employees of the BLIND PIG the ODYSSEY, and MR. FLOOD'S PARTY, the musicians who played- STEVE MACKAY, ARLENE KWASNIAK, HAWG TATE, BILL LYNN, JEFF COLE, STEVE NEWHOUSE, the UP, ARTIE ALINIKOFF, and three from BUDDIES IN THE SADDLE; MISS LURLEEN, DENNIS O'BRIEN, PETER CLARK and all the people who came to help the SUN and to get together with everyone and get high on the good music. We plan to start buying materials and start on the work after this issue hits the streets, and people-power is badly needed so anyone who wants to help should call 761-1709 and ask for John Collins. THE COMMUNITY SHOULD SUPPORT AND CONTROL THE COMMUNITY NEWSPAPER!