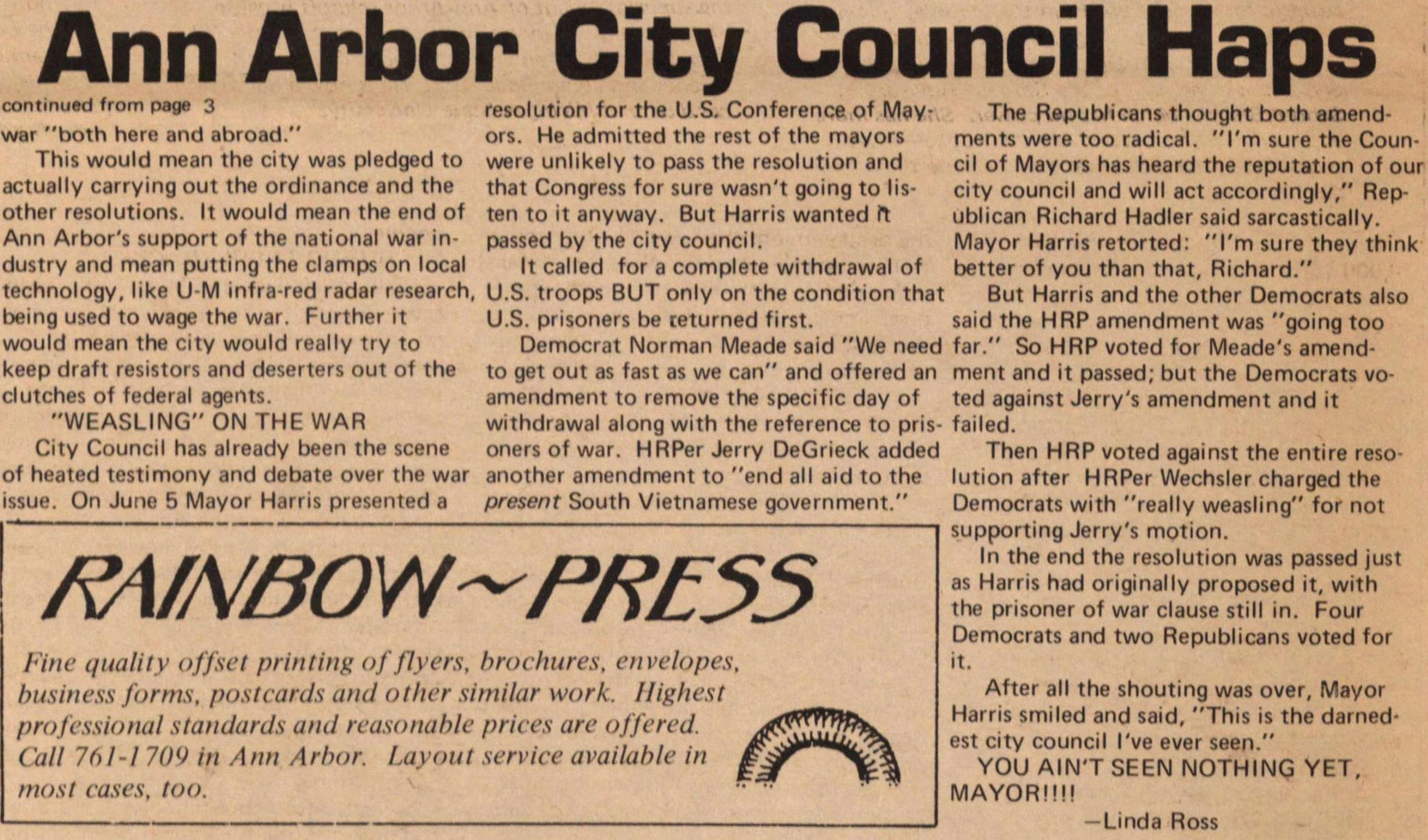 Ann Arbor City Council Haps continued from page 3 war "both here and abroad." This would mean the city was pledged to actually carrying out the ordinance and the other resolutions. It would mean the end of Ann Arbor's support of the national war industry and mean putting the clamps on local technology, hke U-M infra-red radar research, being used to wage the war. Further it would mean the city would really try to keep draft resistors and deserters out of the clutches of federal agents. "WEASLING" ON THE WAR City Council has already been the scène of heated testimony and debate over the war issue. On June 5 Mayor Harris presented a resolution for the U.S. Conference of Mayors. He admitted the rest of the mayors were unlikely to pass the resolution and that Congress for sure wasn't going to listen to it anyway. But Harris wanted ft passed by the city council. It called for a complete withdrawal of U.S. troops BUT only on the condition that U.S. prisoners be teturned first. Democrat Norman Meade said "We need to get out as fast as we can" and offered an amendment to remove the specific day of withdrawal along with the reference to prisoners of war. HRPer Jerry DeGrieck added another amendment to "end all aid to the present South Vietnamese government." The Republicans thought both amendments were too radical, "l'm sure the Council of Mayors has heard the reputation of our city council and will act accordingly," Republican Richard Hadier said sarcastically. Mayor Harris retorted: "l'm sure they think better of you than that, Richard." But Harris and the other Democrats also said the HRP amendment was "going too far." So HRP voted for Meade's amendment and it passed; but the Democrats voted against Jerry's amendment and it failed. Then HRP voted against the entire resolution after HRPer Wechsler charged the Democrats with "really weasling" for not supporting Jerry's motion. In the end the resolution was passed just as Harris had original ly proposed it, with the prisoner of war clause still in. Four Democrats and two Republicans voted for it. After all the shouting was over. Mayor Harris smiled and said, "This is the darnedest city council l've ever seen." YOU AIN'T SEEN NOTHING YET, MAYOR!!!!