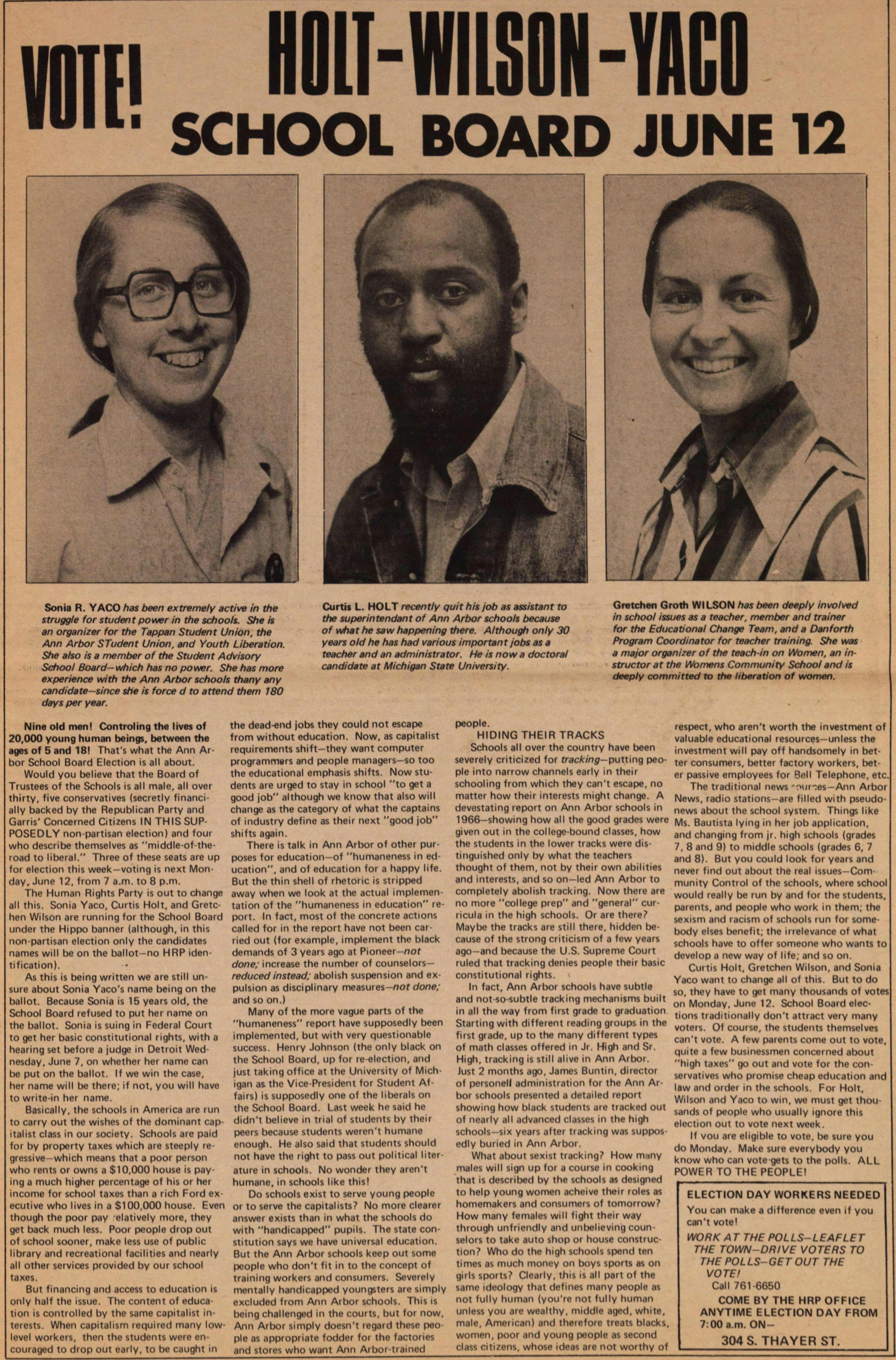 Nine oíd men! Controlling the lives of 20,000 young human beings, between the ages of 5 and 18! That's what the Ann Arbor School Board Electíon is all about.

Would you believe that the Board of Trustees of the Schools is all male, all over thirty, five conservatives (secretly financially backed by the Republican Party and Garris' Concerned Citizens IN THIS SUPPOSEDLY non-partisan election) and four who describe themselves as "middle-of-the-road to liberal." Three of these seats are up for election this week- voting is next Monday. June 12, from 7 a.m. to 8 p.m.

The Human Rights Party is out to change all this. Sonia Yaco, Curtis Holt, and Gretchen Wilson are running for the School Board under the Hippo banner (although, in this non-partisan election only the candidate's names will be on the ballot-no HRP identification).

As this is being written we are still unsure about Sonia Yaco's name being on the ballot. Because Sonia is 15 years old, the School Board refused to put her name on the ballot. Sonia is suing in Federal Court to get her basic constitutional rights, with a hearing set before a judge in Detroit Wednesday, June 7, on whether her name can be put on the ballot. If we win the case, her name will be there; if not, you will have to write-in her name.

Basically, the schools in America are run to carry out the wishes of the dominant capitalist class in our society. Schools are paid for by property taxes which are steeply regressive which means that a poor person who rents or owns a $10,000 house is paying a much higher percentage of his or her income for school taxes than a rich Ford executive who lives in a $100,000 house. Even though the poor pay relatively more, they get back much less. Poor people drop out of school sooner, make less use of public library and recreational facilities, and nearly all other services provided by our school taxes.

But financing and access to education is only half the issue. The content of education is controlled by the same capitalist interests. When capitalism required many low-level workers, then the students were encouraged to drop out early, to be caught In the dead-end jobs they could not escape from without education. Now, as capitalist requirements shift- they want computer programmers and people managers- so too the educational emphasis shifts. Now students are urged to stay in school "to get a good job" although we know that also will change as the category of what the captains of industry define as their next "good job" shifts again.

There is talk in Ann Arbor of other purposes for education- of "humaneness in education", and of education for a happy life. But the thin shell of rhetoric is stripped away when we look at the actual implementation of the "humaneness in education" report. In fact, most of the concrete actions called for in the report have not been carried out (for example, implement the black demands of 3 years ago at Pioneer-not done; increase the number of counselors- reduced instead; abolish suspension and expulsion as disciplinary measures- not done, and so on.)

Many of the more vague parts of the "humaneness" report have supposedly been implemented, but with very questionable success. Henry Johnson (the only black on the School Board, up for re-election, and just taking office at the University of Michigan as the Vice-President for Student Affairs) is supposedly one of the liberals on the School Board. Last week he said he didn't believe in trial of students ty their peers because students weren't humane enough. He also said that students should not have the right to pass out political literature in schools. No wonder they aren't humane, in schools like this!

Do schools exist to serve young people or to serve the capitalists? No more clearer answer exists than in what the schools do with "handicapped" pupils. The state constitution says we have universal education. But the Ann Arbor schools keep out some people who don't fit into the concept of training workers and consumers. Severely mentally handicapped youngsters are simply excluded from Ann Arbor schools. This is being challenged in the courts, but for now, Ann Arbor simply doesn't regard these people as appropriate fodder for the factories and stores who want Ann Arbor-trained people.

Schools all over the country have been severely criticized for track in p-putting people into narrow channels early in their schooling from which they can't escape, no matter how their interests might change. A devastating report on Ann Arbor schools in 1966-showing how all the good grades were given out in the college-bound classes, how the students in the lower tracks were distinguished only by what the teachers thought of them, not by their own abilities and interests, and so on- led Ann Arbor to completely abolish tracking. Now there are no more "college prep" and "general" curricula In the high schools. Or are there? Maybe the tracks are still there, hidden because of the strong criticism of a few years ago- and because the U.S. Supreme Court ruled that tracking denies people their basic constitutional rights.

In fact, Ann Arbor schools have subtle and not-so-subtle tracking mechanisms built in all the way from first grade to graduation Starting with different reading groups in the first grade, up to the many different types of math classes offered In Jr. High and Sr. High, tracking is still alive in Ann Arbor. Just 2 months ago, James Buntin, director of personnel administration for the Ann Arbor schools presented a detailed report showing how black students are tracked out of nearly all advanced classes in the high schools- six years after tracking was supposedly buried in Ann Arbor.

What about sexist tracking? How many males will sign up for a course in cooking that is described by the schools as designed to help young women achieve their roles as homemakers and consumers of tomorrow? How many females will fight their way through unfriendly and unbelieving counselors to take auto shop or house construction? Who do the high schools spend ten times as much money on boys sports as on girls sports? Clearly, this is all part of the same ideology that defines many people as not fully human (you're not fully human unless you are wealthy, middle-aged, white, male, American) and therefore treats blacks, women, poor and young people as second class citizens, whose ideas are not worthy of respect, who aren't worth the investment of valuable educational resources- unless the investment will pay off handsomely in better consumers, better factory workers, better passive employees for Bell Telephone, etc.

The traditional news sources- Ann Arbor News, radio stations- are filled with pseudo-news about the school system. Things like Ms. Bautista lying in her job application, and changing from jr. high schools (grades 7, 8, and 9) to middle schools (grades 6, 7, and 8). But you could look for years and never find out about the real issues- Community Control of the schools, where school would really be run by and for the students, parents, and people who work in them; the sexism and racism of schools run for somebody else's benefit; the irrelevance of what schools have to offer someone who wants to develop a new way of life; and so on.

Curtis Holt, Gretchen Wilson, and Sonia Yaco want to change all of this. But to do so, they have to get many thousands of votes on Monday, June 12. School Board elections traditionally don't attract very many voters. Of course, the students themselves can't vote. A few parents come out to vote, quite a few businessmen concerned about "high taxes" go out and vote for the conservatives who promise cheap education and law and order in the schools. For Holt, Wilson, and Yaco to win, we must get thousands of people who usually ignore this election out to vote next week. If you are eligible to vote, be sure you do Monday. Make sure everybody you know who can vote gets to the polls. ALL POWER TO THE PEOPLE!