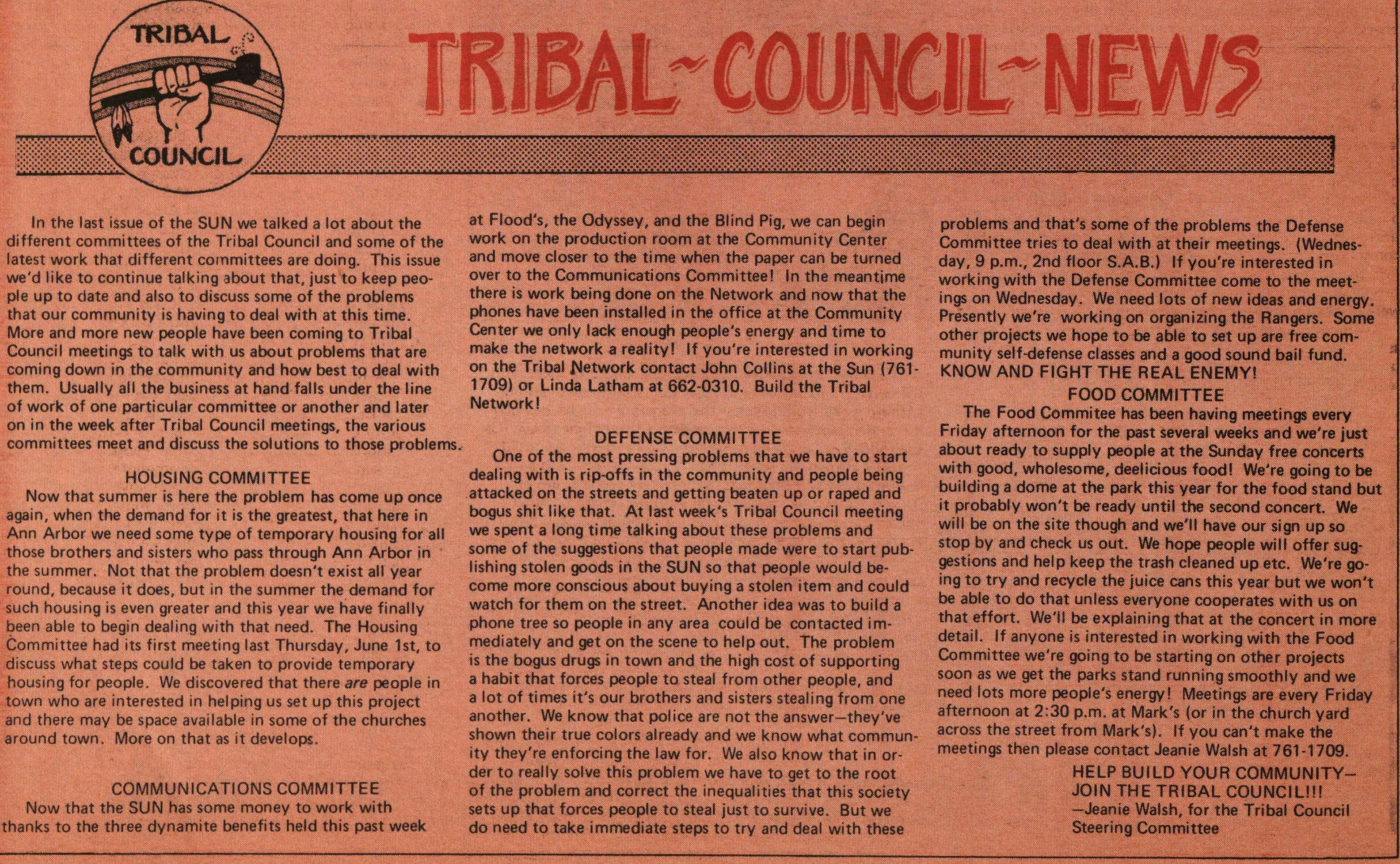 In the last issue of the SUN we talked a lot about the different committees of the Tribal Council and some of the latest work that different committees are doing. This issue we'd like to continue talking about that, just to keep people up to date and also to discuss some of the problems that our community is having to deal with at this time. More and more new people have been coming to Tribal Council meetings to talk with us about problems that are coming down in the community and how best to deal with them. Usually all the business at hand falls under the line of work of one particular committee or another and later on in the week after Tribal Council meetings, the various committees meet and discuss the solutions to those problems.

HOUSING COMMITTEE
Now that summer is here the problem has come up once again, when the demand for it is the greatest, that here in Ann Arbor we need some type of temporary housing for all those brothers and sisters who pass through Ann Arbor in the summer. Not that the problem doesn't exist all year round, because it does, but in the summer the demand for such housing is even greater and this year we have finally been able to begin dealing with that need. The Housing Committee had its first meeting last Thursday, June 1st, to discuss what steps could be taken to provide temporary housing for people. We discovered that there are people in town who are interested in helping us set up this project and there may be space available in some of the churches around town. More on that as it develops.

COMMUNICATIONS COMMITTEE
Now that the SUN has some money to work with thanks to the three dynamite benefits held this past week at Flood's, the Odyssey, and the Blind Pig, we can begin work on the production room at the Community Center and move closer to the time when the paper can be turned over to the Communications Committee! In the meantime there is work being done on the Network and now that the phones have been installed in the office at the Community Center we only lack enough people's energy and time to make the network a reality! If you're interested in working on the Tribal Network contact John Collins at the Sun (7611709) or Linda Latham at 662-0310. Build the Tribal Network!

DEFENSE COMMITTEE
One of the most pressing problems that we have to start dealing with is rip-offs in the community and people being attacked on the streets and getting beaten up or raped and bogus shit like that. At last week's Tribal Council meeting we spent a long time talking about these problems and some of the suggestions that people made were to start publishing stolen goods in the SUN so that people would become more conscious about buying a stolen item and could watch for them on the street. Another idea was to build a phone tree so people in any area could be contacted immediately and get on the scene to help out. The problem is the bogus drugs in town and the high cost of supporting a habit that forces people to steal from other people, and a lot of times it's our brothers and sisters stealing from one another. We know that police are not the answer- they've shown their true colors already and we know what community they're enforcing the law for. We also know that in order to really solve this problem we have to get to the root of the problem and correct the inequalities that this society sets up that forces people to steal just to survive. But we do need to take immediate steps to try and deal with these problems and that's some of the problems the Defense Committee tries to deal with at their meetings. (Wednesday, 9 p.m., 2nd floor S.A.B.) If you're interested in working with the Defense Committee come to the meetings on Wednesday. We need lots of new ideas and energy. Presently we're working on organizing the Rangers. Some other projects we hope to be able to set up are free community self-defense classes and a good sound bail fund. KNOW AND FIGHT THE REAL ENEMY!

FOOD COMMITTEE
The Food Committee has been having meetings every Friday afternoon for the past several weeks and we're just about ready to supply people at the Sunday free concerts with good, wholesome, delicious food! We're going to be building a dome at the park this year for the food stand but it probably won't be ready until the second concert. We will be on the site though and we'll have our sign up so stop by and check us out. We hope people will offer suggestions and help keep the trash cleaned up etc. We're going to try and recycle the juice cans this year but we won't be able to do that unless everyone cooperates with us on that effort. We'll be explaining that at the concert in more detail. If anyone is interested in working with the Food Committee we're going to be starting on other projects soon as we get the parks stand running smoothly and we need lots more people's energy! Meetings are every Friday afternoon at 2:30 p.m. at Mark's (or in the church yard across the street from Mark's). If you can't make the meetings then please contact Jeanie Walsh at 761-1709.

HELP BUILD YOUR COMMUNITYJOIN THE TRIBAL COUNCIL!!! for the Tribal Council Steering Committee