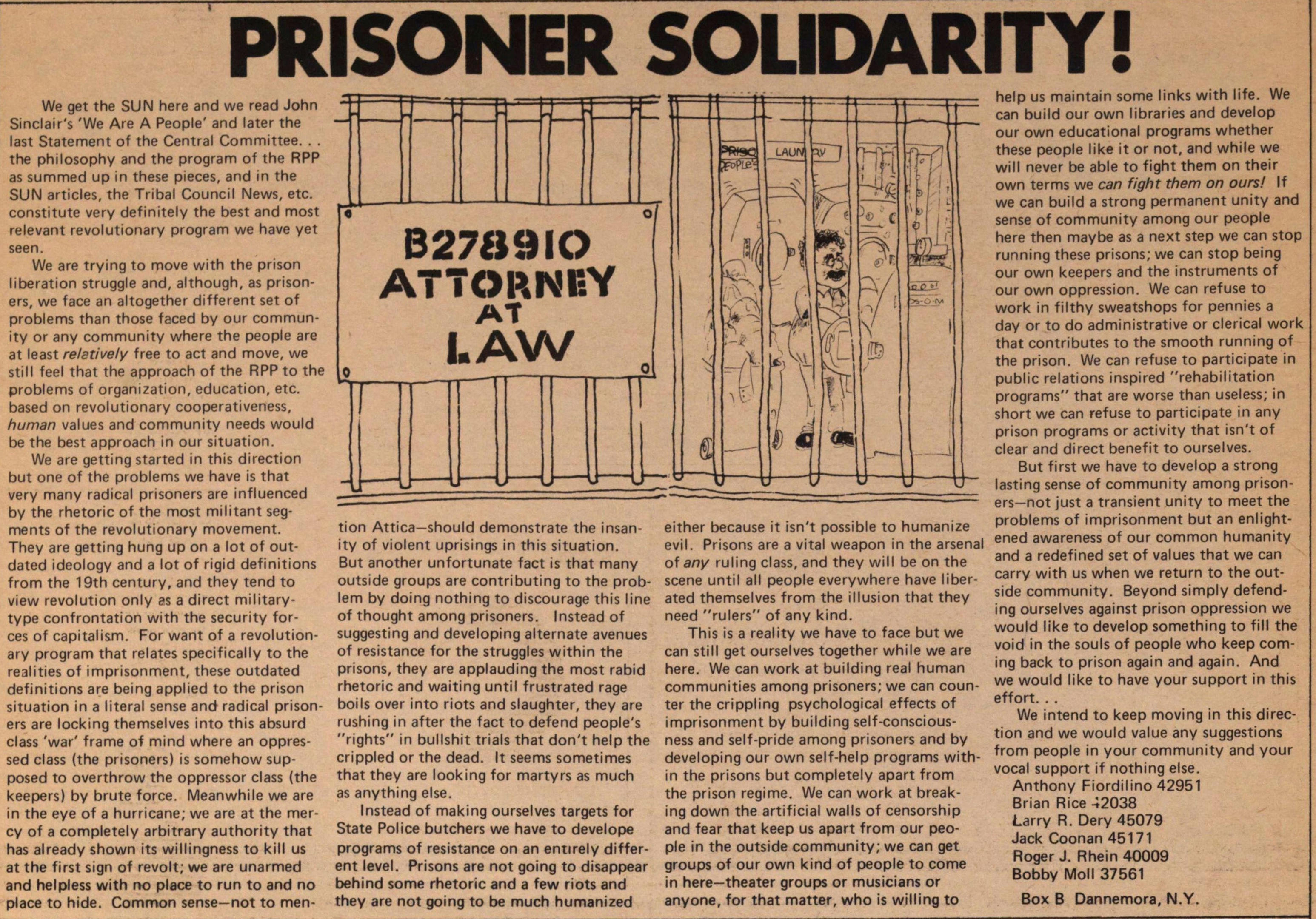 We get the SUN here and we read John Sinclair's 'We Are A People' and later the last Statement of the Central Committee. . . the philosophy and the program of the RPP as summed up n these pieces, and in the SUN articles, the Tribal Council News, etc. constitute very definitely the best and most relevant revolutionary program we have yet seen. We are trying to move with the prison liberation struggle and, although, as prisoners, we face an altogether different set of problems than those faced by our community or any community where the people are at least relatively free to act and move, we still feel that the approach of the RPP to the problems of organization, education, etc. based on revolutionary cooperativeness, human values and community needs would be the best approach in our situation. We are getting started in this direction but one of the problems we have is that very many radical prisoners are influenced by the rhetoric of the most militant segments of the revolutionary movement. They are getting hung up on a lot of outdated ideology and a lot of rigid definitions f rom the 19th century, and they tend to view revolution only as a direct militarytype confrontation with the security forces of capitalism. For want of a revolutionary program that relates specifically to the realities of imprisonment, these outdated definitions are being applied to the prison situation in a literal sense and radical prisoners are locking themselves into this absurd class 'war' frame of mind where an oppressed class (the prisoners) is somehow supposed to overthrow the oppressor class (the keepers) by brute force. Meanwhile we are in the eye of a hurricane; we are at the mercy of a completely arbitrary authority that has already shown its willingness to kill us at the first sign of revolt; we are unarmed and helpless with no place to run to and no place to hide. Common sense- not to tion Attica- should demónstrate the insanty of violent uprisings n this situation. But another unfortunate fact s that many outside groups are contri buting to the problem by doing nothing to discourage this line of thought among prisoners. Instead of suggesting and developing altérnate avenues of resistance for the struggles within the prisons, they are applauding the most rabid rhetoric and waiting until frustrated rage boils over into riots and slaughter, they are rushing in after the fact to defend people's "rights" in bullshit trials that don't help the crippled or the dead. It seems sometimes that they are looking for martyrs as much as anything else. Instead of making ourselves targets for State Pólice butchers we have to develope programs of resistance on an entirely different level. Prisons are not going to disappear behind some rhetoric and a few riots and they are not going to be much humanized either because t sn't possible to humanize evil. Prisons are a vital weapon in the arsenal of any ruling class, and they will be on the scène until all people everywhere have liberated themselves from the Ilusión that they need "rulers" of any kind. This is a reality we have to face but we can still get ourselves together while we are here. We can work at building real human communities among prisoners; we can counter the crippling psychological effects of imprisonment by building self-consciousness and self-pride among prisoners and by developing our own self-help programs within the prisons but completely apart from the prison regime. We can work at breaking down the artificial walls of censorship and fear that keep us apart from our people in the outside community; we can get groups of our own kind of people to come in here- theater groups or musicians or anyone, for that matter, who is willing to help us maintain some links with Mfe. We can build our own libraries and develop our own educational programs whether these people like it or not, and while we will never be able to fight them on their own terms we can fight them on ours! If we can build a strong permanent unity and sense of community among our people here then maybe as a next step we can stop running these prisons; we can stop being our own keepers and the nstruments of our own oppression. We can refuse to work in filthy sweatshops for pennies a day or to do administrative or clerical work that contributes to the smooth running of the prison. We can refuse to particípate in public relations inspired "rehabilitaron programs" that are worse than useless; in short we can refuse to particípate in any prison programs or activity that isn't of clear and direct benefit to ourselves. But first we have to develop a strong lasting sense of community among prisoners- not just a transient unity to meet the problems of imprisonment but an enlightened awareness of our common humanity and a redefined set of values that we can carry with us when we return to the outside community. Beyond simply defending ourselves against prison oppression we would like to develop something to fill the void in the souls of people who keep coming back to prison again and again. And we would like to have your support in this effort. . . We intend to keep moving in this direction and we would value any suggestions from people in your community and your vocal support f nothing else. Anthony Fiordilino 42951 Brian Rice 42038 Larry R. Dery 45079 Jack Coonan 45171 Roger J. Rhein 40009 Bobby Moll 37561 Box B Dannemora, N.Y.