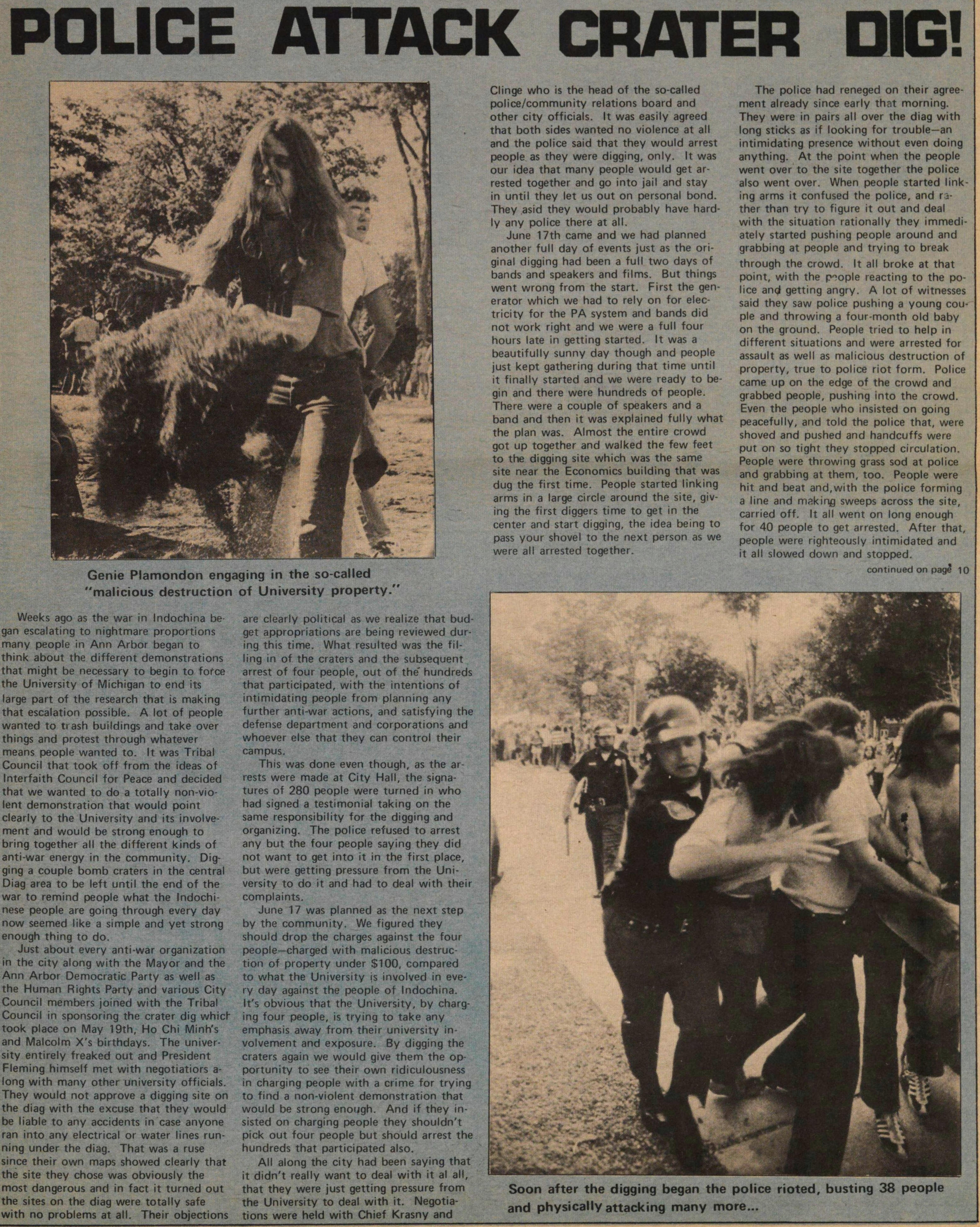 Weeks ago as the war in Indochina began escalating to nightmare proportions many people in Ann Arbor began to think about the different demonstrations that might be necessary to begin to force the University of Michigan to end its large part of the research that is making that escalation possible. A lot of people wanted to trash buildings and take over things and protest through whatever means people wanted to. It was Tribal Council that took off from the ideas of Interfaith Council for Peace and decided that we wanted to do a totally non-violent demonstration that would point clearly to the University and its involvement and would be strong enough to bring together all the different kinds of anti-war energy in the community. Digging a couple bomb craters in the central Diag area to be left until the end of the war to remind people what the Indochinese people are going through every day now seemed like a simple and yet strong enough thing to do.

Just about every anti-war organization in the city along with the Mayor and the Ann Arbor Democratic Party as well as the Human Rights Party and various City Council members joined with the Tribal Council in sponsoring the crater dig which took place on May 19th, Ho Chi Minh's and Malcolm X's birthdays. The university entirely freaked out and President Fleming himself met with negotiators along with many other university officials. They would not approve a digging site on the diag with the excuse that they would be liable to any accidents in case anyone ran into any electrical or water lines running under the diag. That was a ruse since their own maps showed clearly that the site they chose was obviously the most dangerous and in fact it turned out the sites on the diag were totally safe with no problems at all. Their objections are clearly political as we realize that budget appropriations are being reviewed during this time. What resulted was the filling in of the craters and the subsequent arrest of four people, out of the hundreds that participated, with the intentions of intimidating people from planning any further anti-war actions, and satisfying the defense department and corporations and whoever else that they can control their campus.

This was done even though, as the arrests were made at City Hall, the signatures of 280 people were turned in who had signed a testimonial taking on the same responsibility for the digging and organizing. The police refused to arrest any but the four people saying they did not want to get into it in the first place, but were getting pressure from the University to do it and had to deal with their complaints.

June 17 was planned as the next step by the community. We figured they should drop the charges against the four people- charged with malicious destruction of property under $100, compared to what the University is involved in every day against the people of Indochina. It's obvious that the University, by charging four people, is trying to take any emphasis away from their university involvement and exposure. By digging the craters again we would give them the opportunity to see their own ridiculousness in charging people with a crime for trying to find a non-violent demonstration that would be strong enough. And if they insisted on charging people they shouldn't pick out four people but should arrest the hundreds that participated also.

All along the city had been saying that it didn't really want to deal with it at all, that they were just getting pressure from the University to deal with it. Negotiations were held with Chief Krasny and Clinge who is the head of the so-called police community relations board and other city officials. It was easily agreed that both sides wanted no violence at all and the police said that they would arrest people as they were digging, only. It was our idea that many people would get arrested together and go into jail and stay in until they let us out on personal bond. They said they would probably have hardly any police there at all.

June 17th came and we had planned another full day of events just as the original digging had been a full two days of bands and speakers and films. But things went wrong from the start. First the generator which we had to rely on for electricity for the PA system and bands did not work right and we were a full four hours late in getting started. It was a beautifully sunny day though and people just kept gathering during that time until it finally started and we were ready to begin and there were hundreds of people. There were a couple of speakers and a band and then it was explained fully what the plan was. Almost the entire crowd got up together and walked the few feet to the digging site which was the same site near the Economics building that was dug the first time. People started linking arms in a large circle around the site, giving the first diggers time to get in the center and start digging, the idea being to pass your shovel to the next person as we were all arrested together.

The police had reneged on their agreement already since early that morning. They were in pairs all over the diag with long sticks as if looking for trouble- an intimidating presence without even doing anything. At the point when the people went over to the site together the police also went over. When people started linking arms it confused the police, and rather than try to figure it out and deal with the situation rationally they immediately started pushing people around and grabbing at people and trying to break through the crowd. It all broke at that point, with the people reacting to the police and getting angry. A lot of witnesses said they saw police pushing a young couple and throwing a four-month old baby on the ground. People tried to help in different situations and were arrested for assault as well as malicious destruction of property, true to police riot form. Police carne up on the edge of the crowd and grabbed people, pushing into the crowd. Even the people who insisted on going peacefully, and told the police that, were shoved and pushed and handcuffs were put on so tight they stopped circulation. People were throwing grass sod at police and grabbing at them, too. People were hit and beat and, with the police forming a line and making sweeps across the site, carried off. It all went on long enough for 40 people to get arrested. After that, people were righteously intimidated and it all slowed down and stopped.