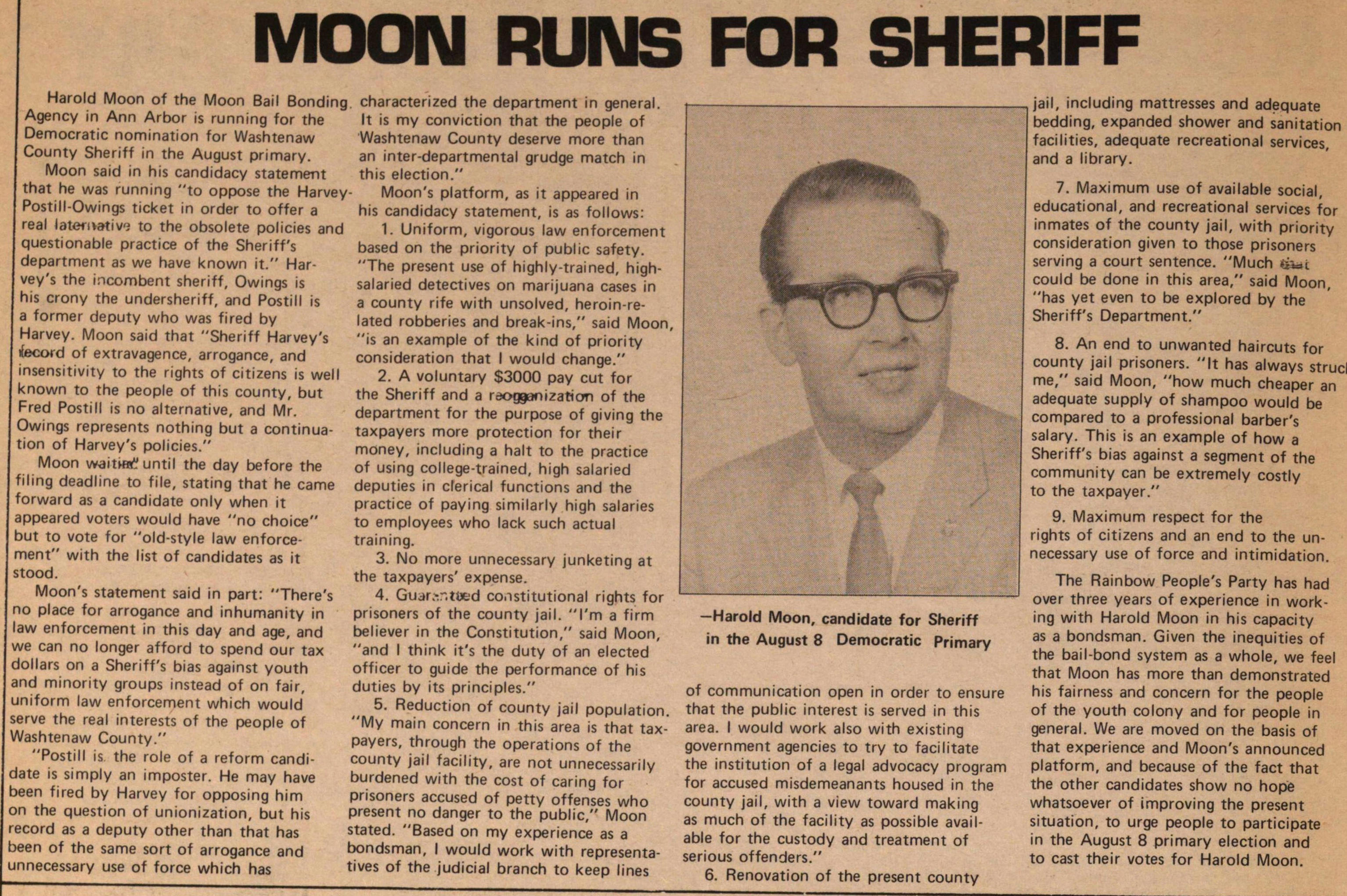 Harold Moon of the Moon Bail Bonding Agency in Ann Arbor is running for the Democratic nomination for Washtenaw County Sheriff in the August primary.

Moon said in his candidacy statement that he was running "to oppose the Harvey Postill-Owings ticket in order to offer a real alternative to the obsolete policies and questionable practice of the Sheriff's department as we have known it." Harvey's the incumbent sheriff, Owings is his crony the undersheriff, and Postill is a former deputy who was fired by Harvey. Moon said that "Sheriff Harvey's record of extravagance, arrogance, and insensitivity to the rights of citizens is well known to the people of this county, but Fred Postill's no alternative, and Mr. Owings represents nothing but a continuation of Harvey's policies."

Moon waited until the day before the filing deadline to file, stating that he came forward as a candidate only when it appeared voters would have "no choice" but to vote for "old-style law enforcement" with the list of candidates as it stood.

Moon's statement said in part: "There's no place for arrogance and inhumanity in law enforcement in this day and age, and we can no longer afford to spend our tax dollars on a Sheriff's bias against youth and minority groups instead of on fair, uniform law enforcement which would serve the real interests of the people of Washtenaw County."

"Postill is the role of a reform candidate is simply an imposter. He may have been fired by Harvey for opposing him on the question of unionization, but his record as a deputy other than that has been of the same sort of arrogance and unnecessary use of force which has characterized the department in general. It is my conviction that the people of Washtenaw County deserve more than an inter-departmental grudge match in this election."

Moon's platform, as it appeared in his candidacy statement, is as follows:

1. Uniform, vigorous law enforcement based on the priority of public safety. "The present use of highly-trained, high-salaried detectives on marijuana cases in a county rife with unsolved, heroin-related robberies and break-ins," said Moon, "is an example of the kind of priority consideration that I would change."

2. A voluntary $3000 pay cut for the Sheriff and a reorganization of the department for the purpose of giving the taxpayers more protection for their money, including a halt to the practice of using college-trained, high salaried deputies in clerical functions and the practice of paying similarly high salaries to employees who lack such actual training.

3. No more unnecessary junketing at the taxpayers' expense.

4. Guaranteed constitutional rights for prisoners of the county jail. "I'm a firm believer in the Constitution," said Moon, "and I think it's the duty of an elected officer to guide the performance of his duties by its principles."

5. Reduction of county jail population. "My main concern in this area is that taxpayers, through the operations of the county jail facility, are not unnecessarily burdened with the cost of caring for prisoners accused of petty offenses who present no danger to the public," Moon stated. "Based on my experience as a bondsman, I would work with representatives of the judicial branch to keep lines of communication open in order to ensure that the public interest is served in this area. I would work also with existing government agencies to try to facilitate the institution of a legal advocacy program for accused misdemeanants housed in the county jail, with a view toward making as much of the facility as possible available for the custody and treatment of serious offenders."

6. Renovation of the present county jail, including mattresses and adequate bedding, expanded shower and sanitation facilities, adequate recreational services, and a library.

7. Maximum use of available social, educational, and recreational services for inmates of the county jail, with priority consideration given to those prisoners serving a court sentence. "Much that could be done in this area," said Moon, "has yet even to be explored by the Sheriff's Department."

8. An end to unwanted haircuts for county jail prisoners. "It has always struck me," said Moon, "how much cheaper an adequate supply of shampoo would be compared to a professional barber's salary. This is an example of how a Sheriff's bias against a segment of the community can be extremely costly to the taxpayer."

9. Maximum respect for the rights of citizens and an end to the unnecessary use of force and intimidation.

The Rainbow People's Party has had over three years of experience in working with Harold Moon in his capacity as a bondsman. Given the inequities of the bail-bond system as a whole, we feel that Moon has more than demonstrated his fairness and concern for the people of the youth colony and for people in general. We are moved on the basis of that experience and Moon's announced platform, and because of the fact that the other candidates show no hope whatsoever of improving the present situation, to urge people to participate in the August 8 primary election and to cast their votes for Harold Moon.

Harold Moon, candidate for Sheriff in the August 8 Democratic Primary