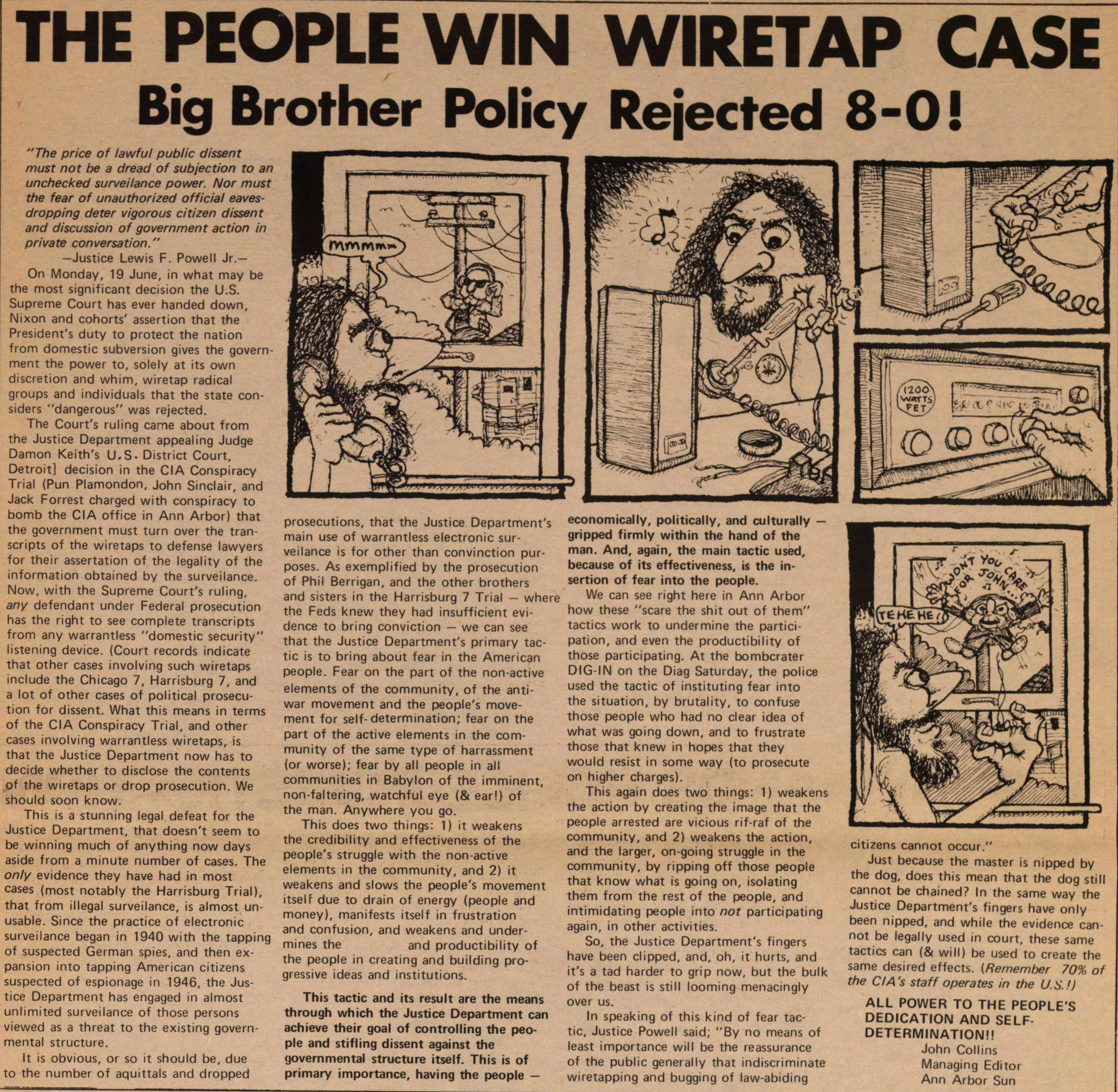 "The price of lawful public dissent must not be a dread of subjection to an unchecked surveillance power. Nor must the fear of unauthorized official eavesdropping deter vigorous citizen dissent and discussion of government action in private conversation."

On Monday, 19 June, in what may be the most significant decision the U.S. Supreme Court has ever handed down, Nixon and cohorts' assertion that the President's duty to protect the nation from domestic subversion gives the government the power to, solely at its own discretion and whim, wiretap radical groups and individuals that the state considers "dangerous" was rejected.

The Court's ruling came about from the Justice Department appealing Judge Damon Keith's U.S. District Court, Detroit] decision in the CIA Conspiracy Trial (Pun Plamondon, John Sinclair, and Jack Forrest charged with conspiracy to bomb the CIA office in Ann Arbor) that the government must turn over the transcripts of the wiretaps to defense lawyers for their assertion of the legality of the information obtained by the surveillance. Now, with the Supreme Court's ruling, any defendant under Federal prosecution has the right to see complete transcripts from any warrantless "domestic security" listening device. (Court records indicate that other cases involving such wiretaps include the Chicago 7, Harrisburg 7, and a lot of other cases of political prosecution for dissent. What this means in terms of the CIA Conspiracy Trial, and other cases involving warrantless wiretaps, is that the Justice Department now has to decide whether to disclose the contents of the wiretaps or drop prosecution. We should soon know.

This is a stunning legal defeat for the Justice Department, that doesn't seem to be winning much of anything now days aside from a minute number of cases. The only evidence they have had in most cases (most notably the Harrisburg Trial), that from illegal surveillance, is almost unusable. Since the practice of electronic surveillance began in 1940 with the tapping of suspected German spies, and then expansion into tapping American citizens suspected of espionage in 1946, the Justice Department has engaged in almost unlimited surveillance of those persons viewed as a threat to the existing governmental structure.

It is obvious, or so it should be, due to the number of acquittals and dropped prosecutions, that the Justice Department's main use of warrantless electronic surveillance is for other than conviction purposes. As exemplified by the prosecution of Phil Berrigan, and the other brothers and sisters in the Harrisburg 7 Trial - where the Feds knew they had insufficient evidence to bring conviction - we can see that the Justice Department's primary tactic is to bring about fear in the American people. Fear on the part of the non-active elements of the community, of the antiwar movement and the people's movement for self-determination; fear on the part of the active elements in the community of the same type of harassment (or worse); fear by all people in all communities in Babylon of the imminent, non-faltering, watchful eye (& ear!) of the man. Anywhere you go.

This does two things: 1) it weakens the credibility and effectiveness of the people's struggle with the non-active elements in the community, and 2) it weakens and slows the people's movement itself due to drain of energy (people and money), manifests itself in frustration and confusion, and weakens and undermines the and producibility of the people in creating and building progressive ideas and institutions.

This tactic and its result are the means through which the Justice Department can achieve their goal of controlling the people and stifling dissent against the governmental structure itself. This is of primary importance, having the people - economically, politically, and culturally - gripped firmly within the hand of the man. And, again, the main tactic used, because of its effectiveness, is the insertion of fear into the people.

We can see right here in Ann Arbor how these "scare the shit out of them" tactics work to undermine the participation, and even the producibility of those participating. At the bomb crater DIG-IN on the Diag Saturday, the police used the tactic of instituting fear into the situation, by brutality, to confuse those people who had no clear idea of what was going down, and to frustrate those that knew in hopes that they would resist in some way (to prosecute on higher charges).

This again does two things: 1) weakens the action by creating the image that the people arrested are vicious riff-raff of the community, and 2) weakens the action, and the larger, on-going struggle in the community, by ripping off those people that know what is going on, isolating them from the rest of the people, and intimidating people into not participating again, in other activities.

So, the Justice Department's fingers have been clipped, and, oh, it hurts, and it's a tad harder to grip now, but the bulk of the beast is still looming menacingly over us.

In speaking of this kind of fear tactic, Justice Powell said; "By no means of least importance will be the reassurance of the public generally that indiscriminate wiretapping and bugging of law-abiding citizens cannot occur."

Just because the master is nipped by the dog, does this mean that the dog still cannot be chained? In the same way the Justice Department's fingers have only been nipped, and while the evidence cannot be legally used in court, these same tactics can (& will) be used to create the same desired effects. (Remember 70% of the ClA's staff operates in the U.S.!)

ALL POWER TO THE PEOPLE'S DEDICATION AND SELF DETERMINATION !!