When The Prison Doors.. 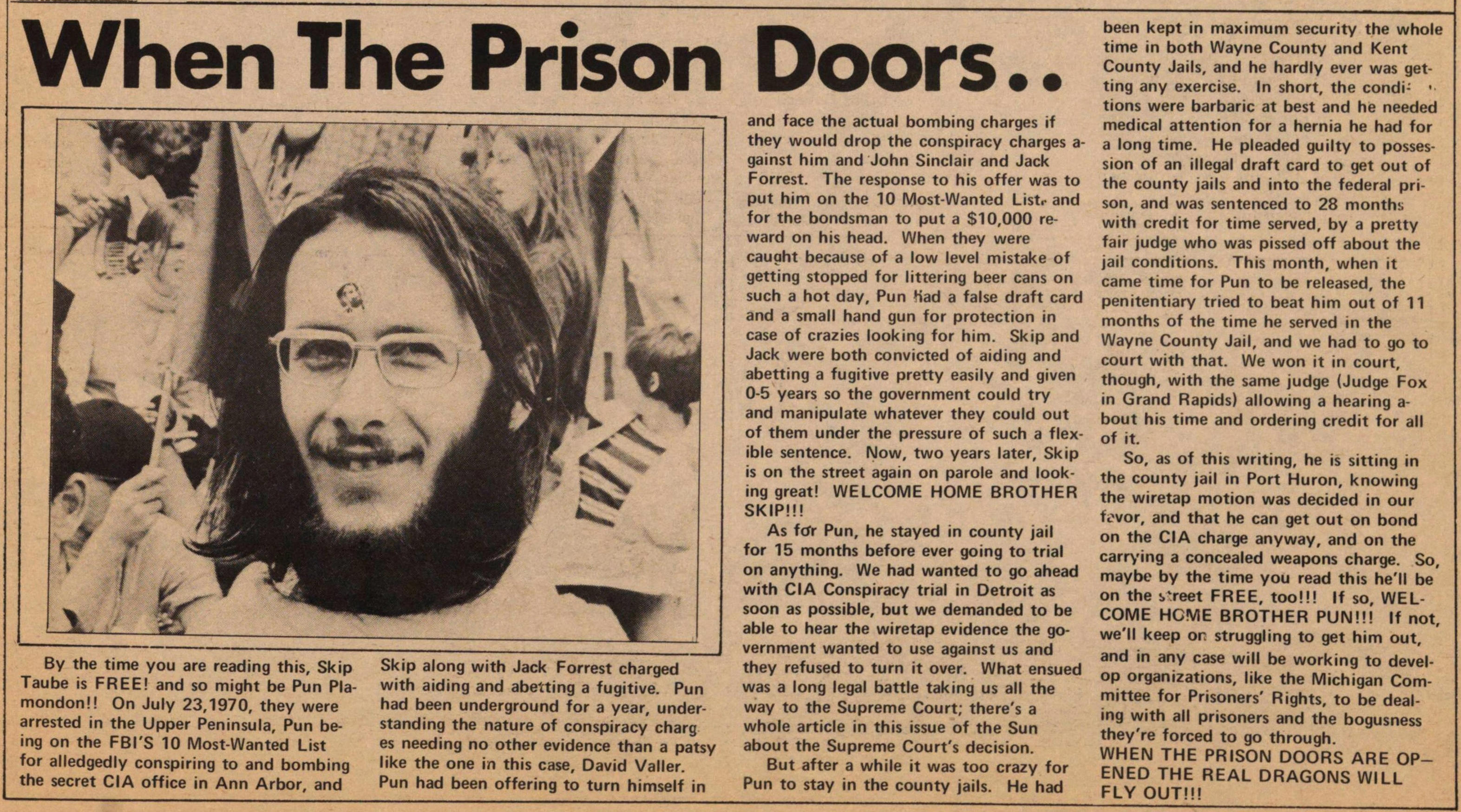 WHEN THE PRISON DOORS..

By the time you are reading this, Skip Taube is FREE! and so might be Pun Plamondon On July 23,1970, they were arrested in the Upper Peninsula, Pun being on the FBI'S 10 Most-Wanted List for allegedly conspiring to and bombing the secret CIA office in Ann Arbor, and Skip along with Jack Forrest charged with aiding and abetting a fugitive. Pun had been underground for a year, understanding the nature of conspiracy charges needing no other evidence than a patsy like the one in this case, David Valler. Pun had been offering to turn himself in and face the actual bombing charges if they would drop the conspiracy charges against him and John Sinclair and Jack Forrest. The response to his offer was to put him on the 10 Most-Wanted List and for the bondsman to put a $10,000 reward on his head. When they were caught because of a low level mistake of getting stopped for littering beer cans on such a hot day, Pun had a false draft card and a small hand gun for protection in case of crazies looking for him. Skip and Jack were both convicted of aiding and abetting a fugitive pretty easily and given 0-5 years so the government could try and manipulate whatever they could out of them under the pressure of such a flexible sentence. Now, two years later, Skip is on the street again on parole and looking great! WELCOME HOME BROTHER SKIP!!!

As for Pun, he stayed in county jail for 15 months before ever going to trial on anything. We had wanted to go ahead with CIA Conspiracy trial in Detroit as soon as possible, but we demanded to be able to hear the wiretap evidence the government wanted to use against us and they refused to turn it over. What ensued was a long legal battle taking us all the way to the Supreme Court; there's a whole article in this issue of the Sun about the Supreme Court's decision.

But after a while it was too crazy for Pun to stay in the county jails. He had been kept in maximum security the whole time in both Wayne County and Kent County Jails, and he hardly ever was getting any exercise. In short, the conditions were barbaric at best and he needed medical attention for a hernia he had for a long time. He pleaded guilty to possession of an illegal draft card to get out of the county jails and into the federal prison, and was sentenced to 28 months with credit for time served, by a pretty fair judge who was pissed off about the jail conditions. This month, when it carne time for Pun to be released, the penitentiary tried to beat him out of 11 months of the time he served in the Wayne County Jail, and we had to go to court with that. We won it in court, though, with the same judge (Judge Fox in Grand Rapids) allowing a hearing about his time and ordering credit for all of it.

So, as of this writing, he is sitting in the county jail in Port Huron, knowing the wiretap motion was decided in our favor, and that he can get out on bond on the CIA charge anyway, and on the carrying a concealed weapons charge. So, maybe by the time you read this he'll be on the street FREE, too!!! If so, WELCOME HOME BROTHER PUN!!! If not, we'll keep on struggling to get him out, and in any case will be working to develop organizations, like the Michigan Committee for Prisoners' Rights, to be dealing with all prisoners and the bogusness they're forced to go through. WHEN THE PRISON DOORS ARE OPENED THE REAL DRAGONS WILL FLY OUT!!!