"we're Selling Too Much Death" 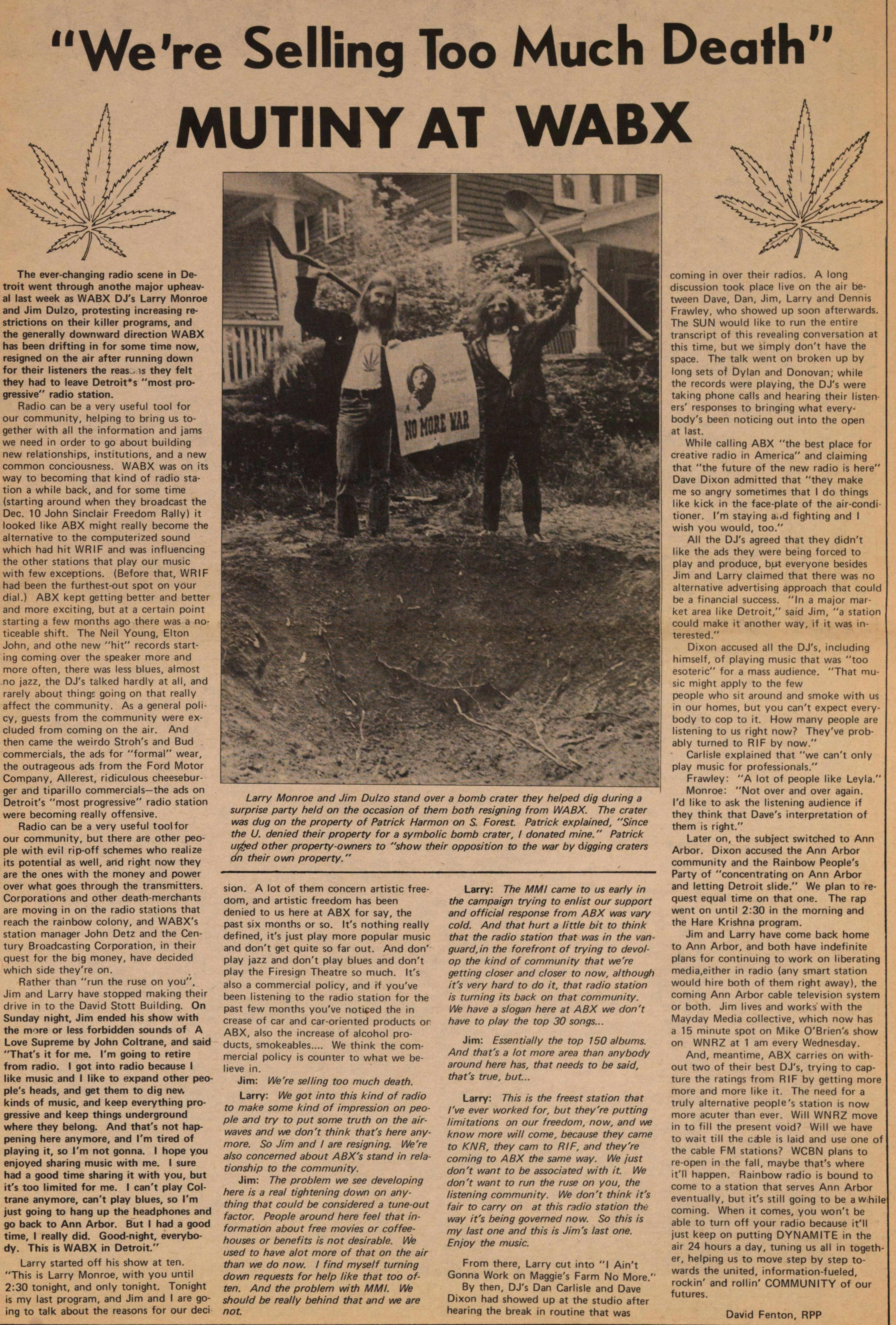 "We're Selling Too Much Death"

The ever-changing radio scene in Detroit went through another major upheaval last week as WABX DJ's Larry Monroe and Jim Dulzo, protesting increasing restrictions on their killer programs, and the generally downward direction WABX has been drifting in for some time now, resigned on the air after running down for their listeners the reasons they felt they had to leave Detroit's "most progressive" radio station.

Radio can be a very useful tool for our community, helping to bring us together with all the information and jams we need in order to go about building new relationships, institutions, and a new common consciousness. WABX was on its way to becoming that kind of radio station a while back, and for some time (starting around when they broadcast the Dec. 10 John Sinclair Freedom Rally) it looked like ABX might really become the alternative to the computerized sound which had hit WRIF and was influencing the other stations that play our music with few exceptions. (Before that, WRIF had been the furthest-out spot on your dial.) ABX kept getting better and better and more exciting, but at a certain point starting a few months ago there was a noticeable shift. The Neil Young, Elton John, and other new "hit" records starting coming over the speaker more and more often, there was less blues, almost no jazz, the DJ's talked hardly at all, and rarely about things going on that really affect the community. As a general policy, guests from the community were excluded from coming on the air. And then came the weirdo Stroh's and Bud commercials, the ads for "formal" wear, the outrageous ads from the Ford Motor Company, Allerest, ridiculous cheeseburger and tiparillo commercials- the ads on Detroit's "most progressive" radio station were becoming really offensive.

Radio can be a very useful tool for our community, but there are other people with evil rip-off schemes who realize its potential as well, and right now they are the ones with the money and power over what goes through the transmitters. Corporations and other death-merchants are moving in on the radio stations that reach the rainbow colony, and WABX's station manager John Detz and the Century Broadcasting Corporation, in their quest for the big money, have decided which side they're on.

Rather than "run the ruse on you", Jim and Larry have stopped making their drive in to the David Stott Building. On Sunday night, Jim ended his show with the more or less forbidden sounds of A Love Supreme by John Coltrane, and said "That's it for me. l'm going to retire from radio. I got into radio because I like music and I like to expand other people's heads, and get them to dig new kinds of music, and keep everything progressive and keep things underground where they belong. And that's not happening here anymore, and l'm tired of playing it, so I'm not gonna. I hope you enjoyed sharing music with me. I sure had a good time sharing it with you, but it's too limited for me. I can't play Coltrane anymore, can't play blues, so l'm just going to hang up the headphones and go back to Ann Arbor. But I had a good time, I really did. Good-night, everybody. This is WABX in Detroit."

Larry started off his show at ten. "This is Larry Monroe, with you until 2:30 tonight, and only tonight. Tonight is my last program, and Jim and I are gona to talk about the reasons for our decision. A lot of them concern artistic freedom, and artistic freedom has been denied to us here at ABX for say, the past six months or so. It's nothing really defined, t's just play more popular music and don't get quite so far out. And don' play jazz and don't play blues and don't play the Firesign Theatre so much. It's also a commercial policy, and if you've been listening to the radio station for the past few months you've noted the increase of car and car-oriented products on ABX, also the increase of alcohol products, smokables.... We think the commercial policy is counter to what we believe in.

Jim: We're selling too much death.

Larry: We got into this kind of radio to make some kind of impression on people and try to put some truth on the airwaves and we don't think that's here anymore. So Jim and I are resigning. We're also concerned about ABX's stand in relationship to the community.

Jim: The problem we see developing here is a real tightening down on anything that could be considered a tune-out factor. People around here feel that information about free movies or coffeehouses or benefits is not desirable. We used to have a lot more of that on the air than we do now. I find myself turning down requests for help like that too often. And the problem with MMI. We should be really behind that and we are not.

Larry: The MMI came to us early in the campaign trying to enlist our support and official response from ABX was very cold. And that hurt a little bit to think that the radio station that was in the vanguard in the forefront of trying to develop the kind of community that we're getting closer and closer to now, although it's very hard to do it, that radio station is turning its back on that community. We have a slogan here at ABX we don't have to play the top 30 songs...

Jim: Essentially the top 150 albums. And that's a lot more area than anybody around here has, that needs to be said, that's true. but...

Larry: This is the freest station that l've ever worked for, but they're putting limitations on our freedom, now, and we know more will come, because they came to KNR, they came to RIF, and they're coming to ABX the same way. We just don 't want to be associated with it. We don't want to run the ruse on you, the listening community. We don 't think it's fair to carry on at this radio station the way it's being governed now. So this is my last one and this is Jim's last one. Enjoy the music.

From there, Larry cut into "I Ain't Gonna Work on Maggie's Farm No More."

By then, DJ's Dan Carlisle and Dave Dixon had showed up at the studio after hearing the break in routine that was coming in over their radios. A long discussion took place live on the air between Dave, Dan, Jim, Larry and Dennis Frawley, who showed up soon afterwards.

The SUN would like to run the entire transcript of this revealing conversation at this time, but we simply don't have the space. The talk went on broken up by long sets of Dylan and Donovan; while the records were playing, the DJ's were taking phone calls and hearing their listeners' responses to bringing what everybody's been noticing out into the open at last.

While calling ABX "the best place for creative radio in America" and claiming that "the future of the new radio is here" Dave Dixon admitted that "they make me so angry sometimes that I do things like kick in the face-plate of the air conditioner. l'm staying a. id fighting and I wish you would, too."

All the DJ's agreed that they didn't like the adds they were being forced to play and produce, but everyone besides Jim and Larry claimed that there was no alternative advertising approach that could be a financial success. "In a major market area like Detroit," said Jim, "a station could make it another way, if it was interested."

Dixon accused all the DJ's, including himself, of playing music that was "too esoteric" for a mass audience. "That music might apply to the few people who sit around and smoke with us in our homes, but you can't expect everybody to cop to it. How many people are listening to us right now? They've probably turned to RIF by now."

Carlisle explained that "we can't only play music for professionals."

Monroe: "Not over and over again. l'd like to ask the listening audience if they think that Dave's interpretation of them is right."

Later on, the subject switched to Ann Arbor. Dixon accused the Ann Arbor community and the RainbowPeople's Party of "concentrating on Ann Arbor and letting Detroit slide." We plan to request equal time on that one. The rap went on until 2:30 in the morning and the Hare Krishna program. Jim and Larry have come back home to Ann Arbor, and both have indefinite plans for continuing to work on liberating media either in radio (any smart station would hire both of them right away), the coming Ann Arbor cable televisión system or both. Jim lives and works with the Mayday Media collective, which now has a 15 minute spot on Mike O'Brien's show on WNRZ at 1 am every Wednesday.

And, meantime, ABX carries on without two of their best DJ's, trying to capture the ratings from RIF by getting more more and more like it. The need for a truly alternative people's station is now more acuter than ever. Will WNRZ move in to fill the present void? Will we have to wait till the cable is laid and use one of the cable FM stations? WCBN plans to re-open in the falI, maybe that's where it'll happen. Rainbow radio is bound to come to a station that serves Ann Arbor eventually, but it's still going to be a while coming. When it comes, you won't be able to turn off your radio because it'll just keep on putting DYNAMITE in the air 24 hours a day, tuning us all in together, helping us to move step by step towards the united, information-fueled, rockin' and rollin' COMMUNITY of our futures.

A picture with: Larry Monroe and Jim Dulzo standing over a bomb crater they helped dig during surprise party held on the occasion of them both resigning from WABX. The crater was dug on the property of Patrick Harmon on S. Forest. Patrick explained, "Since  the U. denied their property for a symbolic bomb crater, I donated mine." Patrick urged other property owners to "show their opposition to the war by digging craters on their own property."