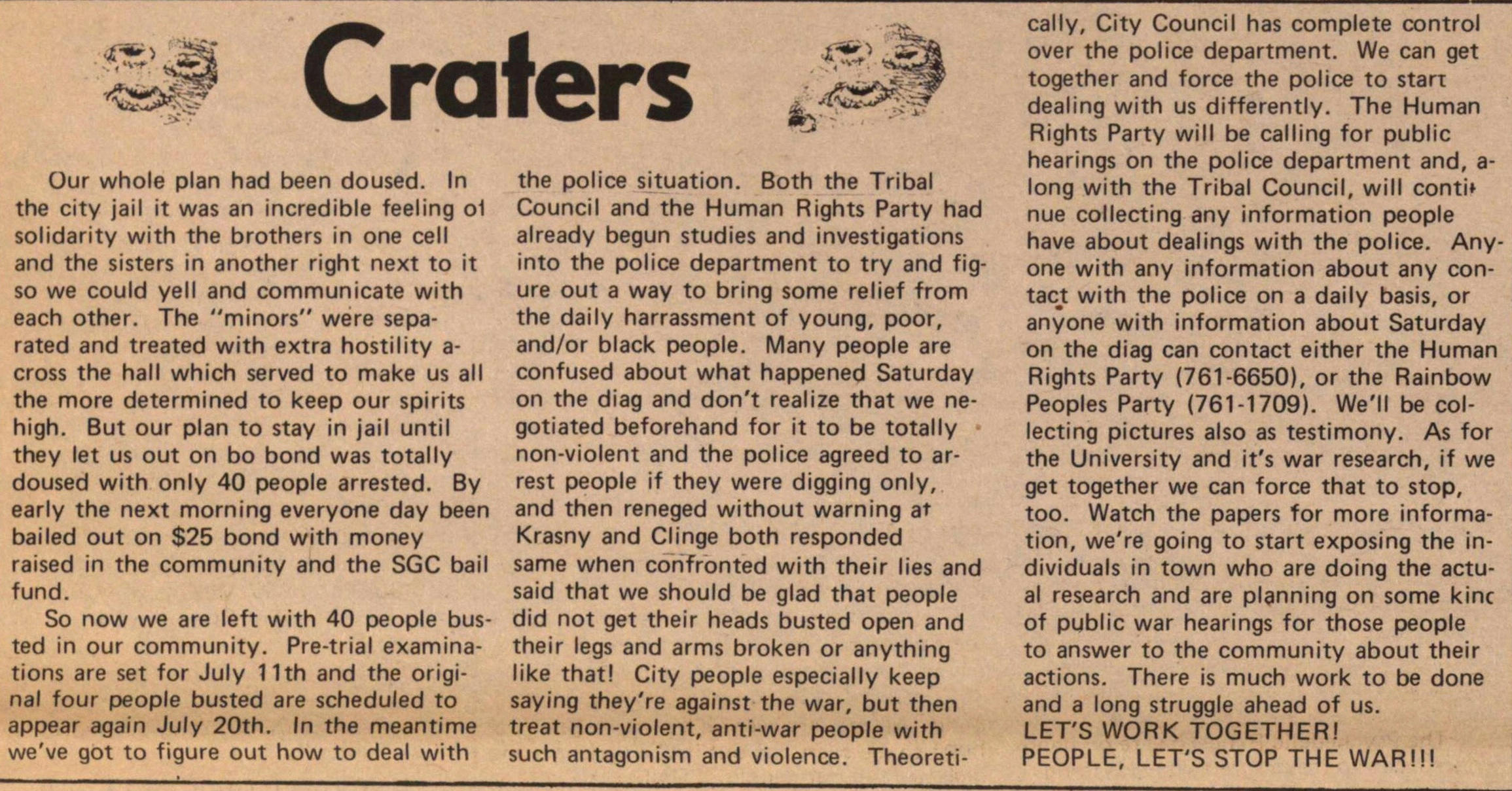 Our whole plan had been doused. In the city jail t was an incredible feeling of solidarity with the brothers in one cell and the sisters in another right next to it so we could yell and communicate with each other. The "minors" were separated and treated with extra hostility across the hall which served to make us all the more determined to keep our spirits high. But our plan to stay in jail until they let us out on  bond was totally doused with only 40 people arrested. By early the next morning everyone day been bailed out on $25 bond with money raised in the community and the SGC bail fund.

So now we are left with 40 people busted in our community. Pre-trial examinations are set for July 11th and the original four people busted are scheduled to appear again July 20th. In the meantime we've got to figure out how to deal with the police situation. Both the Tribal Council and the Human Rights Party had already begun studies and investigations into the police department to try and figure out a way to bring some relief from the daily harassment of young, poor, and/or black people. Many people are confused about what happened Saturday on the diag and don't realize that we negotiated beforehand for it to be totally non-violent and the police agreed to arrest people if they were digging only, and then reneged without warning at Krasny and Clinge both responded same when confronted with their lies and said that we should be glad that people did not get their heads busted open and their legs and arms broken or anything like that! City people especially keep saying they're against the war, but then treat non-violent, anti-war people with such antagonism and violence. Theoretically, City Council has complete control over the police department. We can get together and force the police to start dealing with us differently. The Human Rights Party will be calling for public hearings on the police department and, along with the Tribal Council, will continue collecting any information people have about dealings with the police. Anyone with any information about any contact with the police on a daily basis, or anyone with information about Saturday on the diag can contact either the Human Rights Party (761-6650), or the Rainbow Peoples Party (761-1709). We'll be collecting pictures also as testimony. As for the University and its war research, if we get together we can force that to stop, too. Watch the papers for more information, we're going to start exposing the individuals in town who are doing the actual research and are planning on some kind of public war hearings for those people to answer to the community about their actions. There is much work to be done and a long struggle ahead of us. LET'S WORK TOGETHER! PEOPLE, LET'S STOP THE WAR!!!