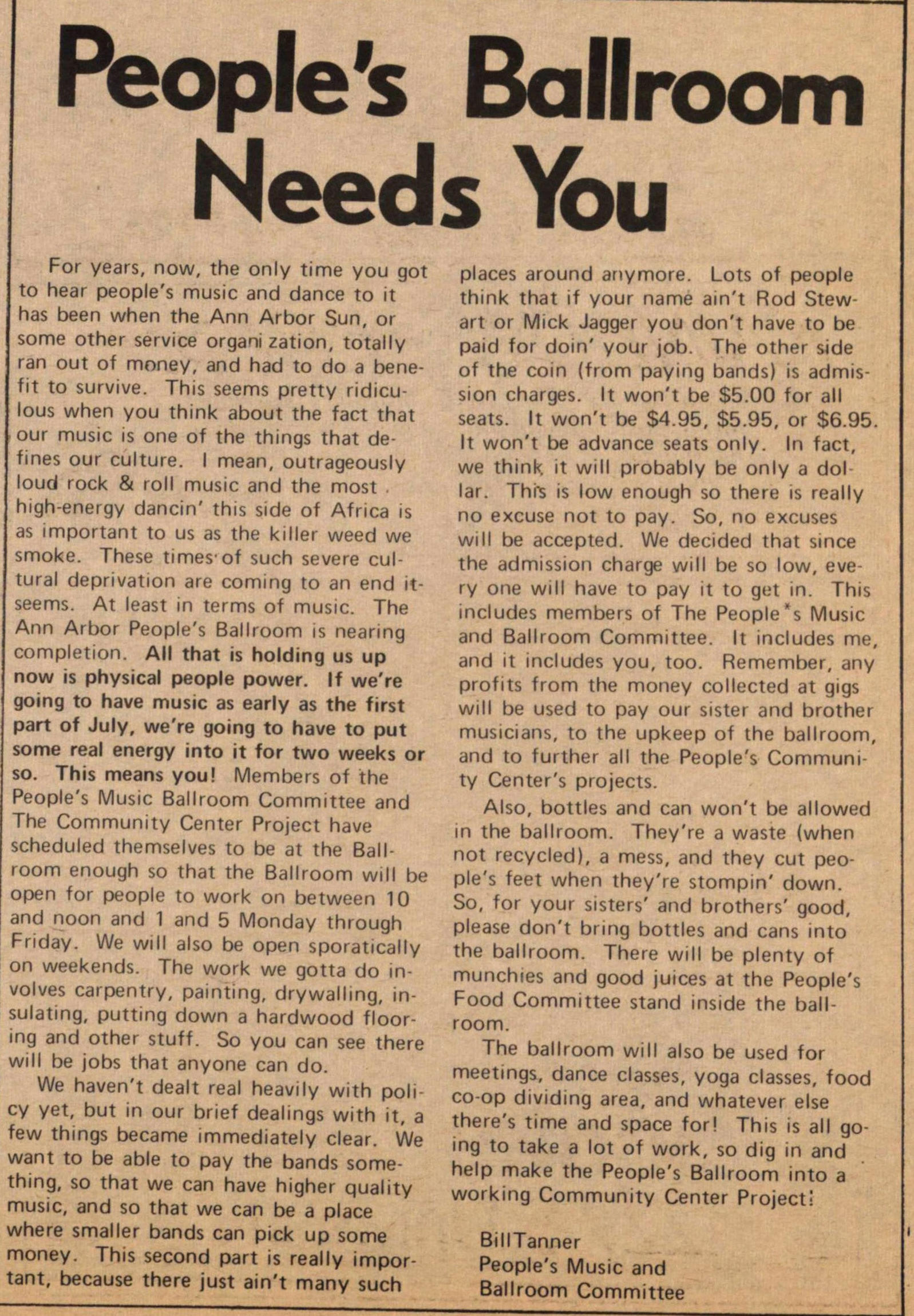 For years, now, the only time you got to hear people's music and dance to it has been when the Ann Arbor Sun, or some other service organisation, totally ran out of money, and had to do a benefit to survive. This seems pretty ridiculous when you think about the fact that our music is one of the things that defines our culture. I mean, outrageously loud rock & roll music and the most high-energy dancing this side of Africa is as important to us as the killer weed we smoke. These times of such severe cultural deprivation are coming to an end it seems. At least in terms of music. The Ann Arbor People's Ballroom is nearing completion. All that is holding us up now s physical people power. If we're going to have music as early as the first part of July, we're going to have to put some real energy into it for two weeks or so. This means you! Members of the People's Music Ballroom Committee and The Community Center Project have scheduled themselves to be at the Ballroom enough so that the Ballroom will be open for people to work on between 10 and noon and 1 and 5 Monday through Friday. We will also be open sporadically on weekends. The work we gotta do involves carpentry, painting, drywalling, insulating, putting down a hardwood flooring and other stuff. So you can see there will be jobs that anyone can do.

We haven't dealt real heavily with policy yet, but in our brief dealings with it, a few things became immediately clear. We want to be able to pay the bands something, so that we can have higher quality music, and so that we can be a place where smaller bands can pick up some money. This second part is really important, because there just ain't many such places around anymore. Lots of people think that if your name ain't Rod Stewart or Mick Jagger you don't have to be paid for doing your job. The other side of the coin (from paying bands) is admission charges. It won't be $5.00 for all seats. It won't be $4.95, $5.95, or $6.95. It won't be advance seats only. In fact, we think. it will probably be only a dollar. This is low enough so there is really no excuse not to pay. So, no excuses will be accepted. We decided that since the admission charge will be so low, every one will have to pay it to get n. This includes members of The People s Music and Ballroom Committee. It includes me, and it includes you, too. Remember, any profits from the money collected at gigs will be used to pay our sister and brother musicians, to the upkeep of the ballroom, and to further all the People's Community Center's projects.

The ballroom will also be used for meetings, dance classes, yoga classes, food co-op dividing área, and whatever else there's time and space for! This is all going to take a lot of work, so dig in and help make the People's Ballroom into a working Community Center Project!