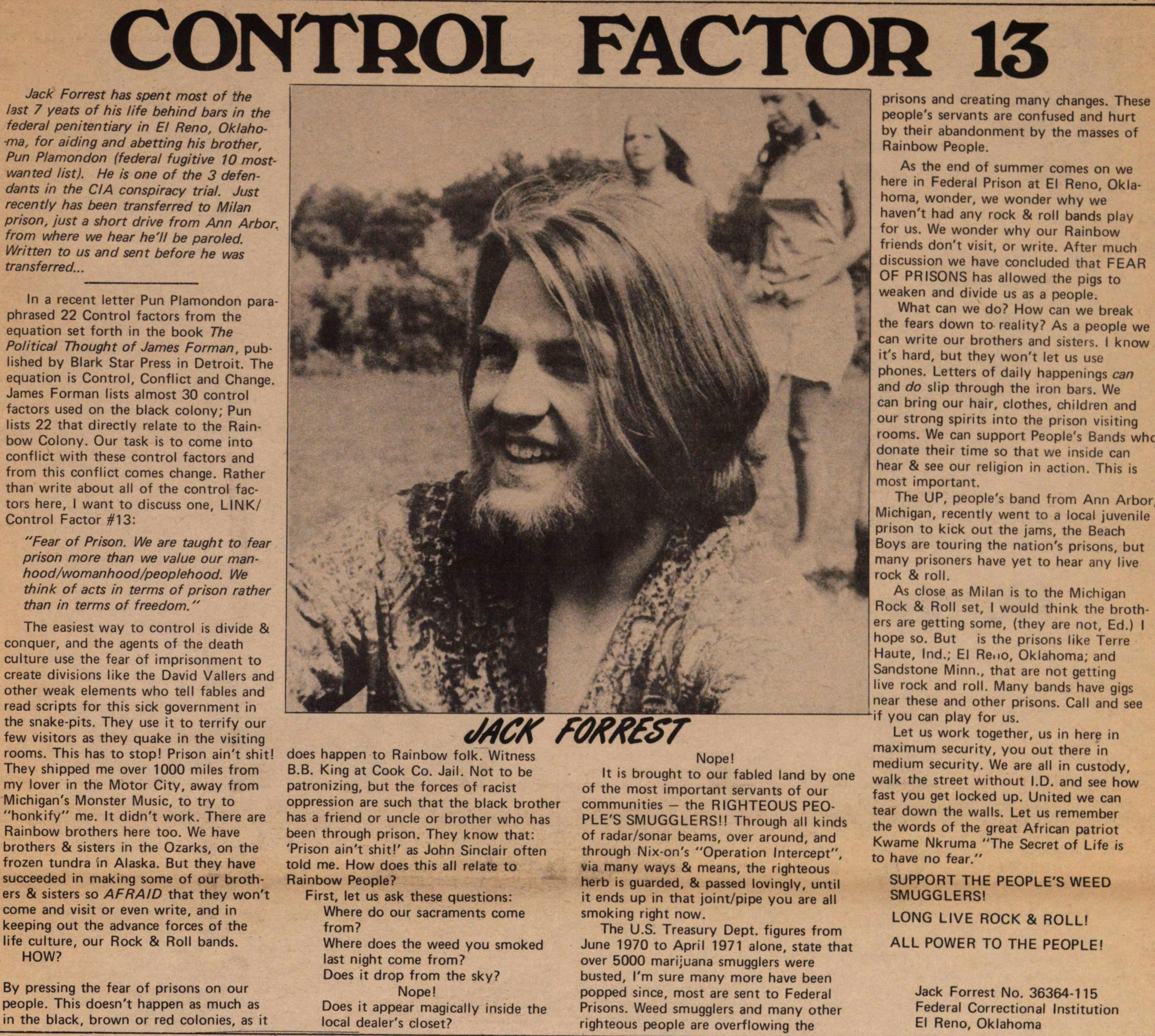 Jack Forrest has spent most of the last 7 years of his life behind bars in the federal penitentiary in El Reno, Oklahoma, for aiding and abetting his brother, Pun Plamondon (federal fugitive 10 most-wanted list). He is one of the 3 defendants in the CIA conspiracy trial. Just recently has been transferred to Milan prison, just a short drive from Ann Arbor, from where we hear he'll be paroled. Written to us and sent before he was transferred ...

In a recent letter Pun Plamondon paraphrased 22 Control factors from the equation set forth in the book The Political Thought of James Forman, published by Blark Star Press in Detroit. The equation is Control, Conflict and Change. James Forman lists almost 30 control factors used on the black colony; Pun lists 22 that directly relate to the Rainbow Colony. Our task is to come into conflict with these control factors and from this conflict comes change. Rather than write about all of the control factors here, I want to discuss one, LINK/Control Factor #13:

"Fear of Prison. We are taught to fear prison more than we value our manhood/womanhood/peoplehood. We think of acts in terms of prison rather than in terms of freedom."

The easiest way to control is divide & conquer, and the agents of the death culture use the fear of imprisonment to create divisions like the David Vallers and other weak elements who tell fables and read scripts for this sick government in the snake-pits. They use it to terrify our few visitors as they quake in the visiting rooms. This has to stop! Prison ain't shit! They shipped me over 1000 miles from my lover in the Motor City, away from Michigan's Monster Music, to try to "honkify" me. It didn't work. There are Rainbow brothers here too. We have brothers & sisters in the Ozarks, on the frozen tundra in Alaska. But they have succeeded in making some of our brothers & sisters so AFRAID that they won't come and visit or even write, and in keeping out the advance forces of the life culture, our Rock & Roll bands.

By pressing the fear of prisons on our people. This doesn't happen as much as in the black, brown or red colonies, as it does happen to Rainbow folk. Witness B.B. King at Cook Co. Jail. Not to be patronizing, but the forces of racist oppression are such that the black brother has a friend or uncle or brother who has been through prison. They know that: 'Prison ain't shit!' as John Sinclair often told me. How does this all relate to Rainbow People?

First, let us ask these questions:

Where do our sacraments come from?

Where does the weed you smoked last night come from?

Does it drop from the sky?

Does it appear magically inside the local dealer's closet?

It is brought to our fabled land by one of the most important servants of our communities -- the RIGHTEOUS PEOPLE'S SMUGGLERS!! Through all kinds of radar/sonar beams, over around, and through Nixon's "Operation Intercept", via many ways & means, the righteous herb is guarded, & passed lovingly, until it ends up in that joint/pipe you are all smoking right now.

The U.S. Treasury Dept. figures from June 1970 to April 1971 alone, state that over 5000 marijuana smugglers were busted. I'm sure many more have been popped since, most are sent to Federal Prisons. Weed smugglers and many other righteous people are overflowing the prisons and creating many changes. These people's servants are confused and hurt by their abandonment by the masses of Rainbow People.

As the end of summer comes on we here in Federal Prison at El Reno, Oklahoma, wonder, we wonder why we haven't had any rock & roll bands play for us. We wonder why our Rainbow friends don't visit, or write. After much discussion we have concluded that FEAR OF PRISONS has allowed the pigs to weaken and divide us as a people.

What can we do? How can we break the fears down to reality? As a people we can write our brothers and sisters. I know it's hard, but they won't let us use phones. Letters of daily happenings can and do slip through the iron bars. We can bring our hair, clothes, children and our strong spirits into the prison visiting rooms. We can support People's Bands who donate their time so that we inside can hear & see our religion in action. This is most important.

The UP, people's band from Ann Arbor Michigan, recently went to a local juvenile prison to kick out the jams, the Beach Boys are touring the nation's prisons, but many prisoners have yet to hear any live rock & roll.

As close as Milan is to the Michigan Rock & Roll set, I would think the brothers are getting some, (they are not, Ed.) I hope so. But is the prisons like Terre Haute, Ind.; El Reno, Oklahoma; and Sandstone Minn., that are not getting live rock and roll. Many bands have gigs near these and other prisons. Cali and see if you can play for us.

Let us work together, us in here in maximum security, you out there in medium security. We are all in custody, walk the street without I.D. and see how fast you get locked up. United we can tear down the walls. Let us remember the words of the great African patriot Kwame Nkruma "The Secret of Life is to have no fear."