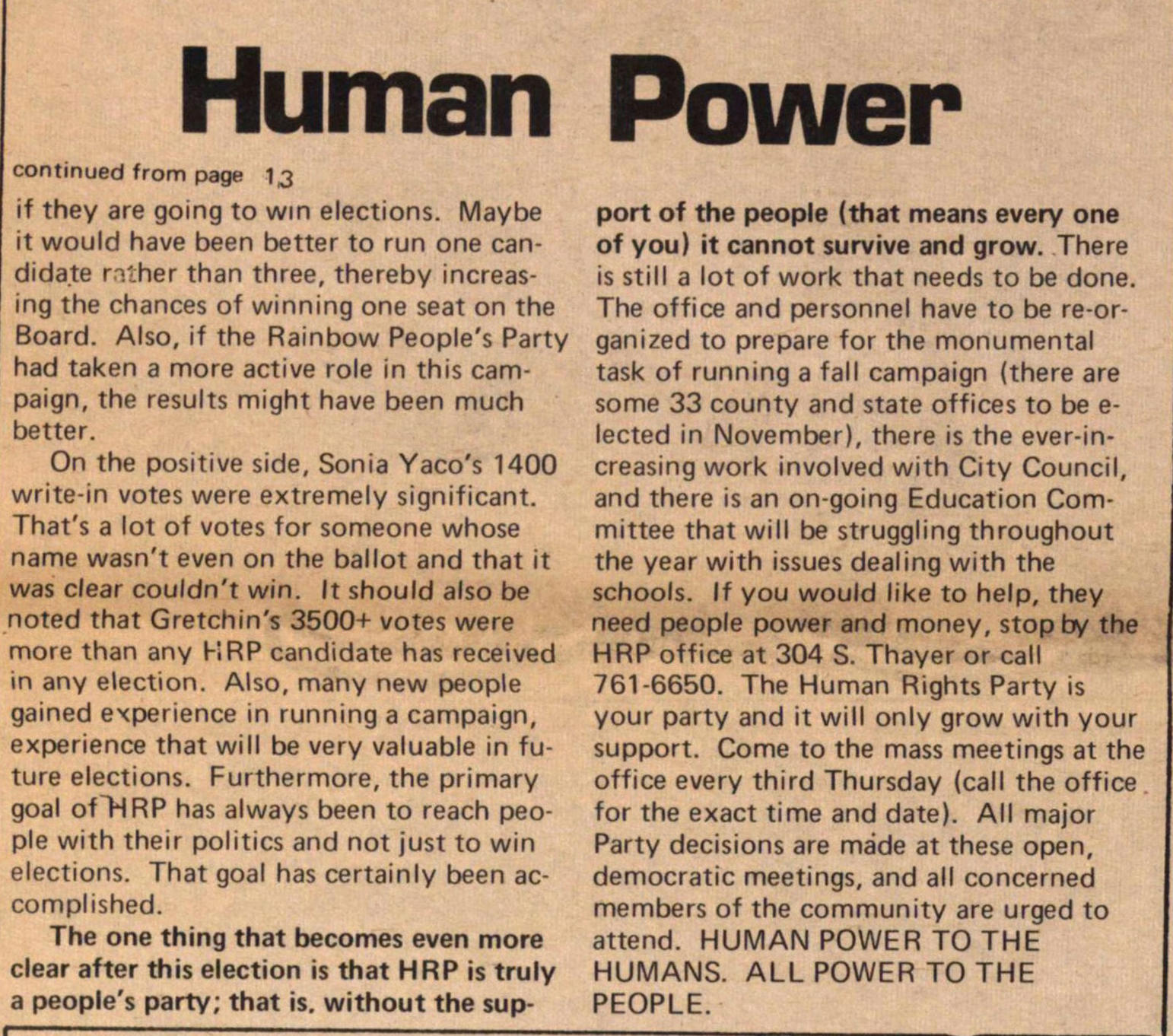 The June 12 Ann Arbor School Board election resulted in the re-election of conservative Cecil Warner and liberal Henry Johnson, and the election of another conservative, Clarence Dukes. Human Rights Party candidates Gretchen Wilson and Curtis Holt came in eighth and ninth respectively. Sonia Yaco received 1400 votes as an HRP write-in candidate. Her name was not allowed on the ballot because she is 15 years old.

Many reasons can be cited for the poor HRP showing in this election. One of the primary reasons was that our people just did not get out and vote. Many of the University students had already left for summer vacation, but even among those that remained, there was an attitude prevalent that the School Board elections didn't really mean anything to them. Maybe the School Board does not affect people as directly as City Council, but it has a tremendous effect on the 20,000 people who have to spend 180 days of every year in the repressive and reactionary concentration camps commonly referred to as schools. Because of the rampant age chauvinism in Amerikan society, students can not represent themselves or even choose someone else to represent them. They need our help to begin to make the schools a more relevant and humane place where the purpose is to allow each person to reach his/her highest human potential rather than directing people into a pre-planned niche in the Amerikan conglomerate machine.

On the other side of the voter turnout, the conservatives, heavily backed by the Republican Party, got their people out in full force. They were plenty scared and wanted to make sure that the School Board didn't turn into another City Council. So the turnout in the mostly Republican areas was especially high.

There are many other factors contributing to the poor showing. HRP just did not receive the time, energy, and money from the community that it had in the City Council campaign and that is necessary

if they are going to win elections. Maybe it would have been better to run one candidate rather than three, thereby increasing the chances of winning one seat on the Board. Also, if the Rainbow People's Party had taken a more active role in this campaign, the results might have been much better.

On the positive side, Sonia Yaco's 1400 write-in votes were extremely significant. That's a lot of votes for someone whose name wasn't even on the ballot and that it was clear couldn't win. It should also be noted that Gretchin's 3500+ votes were more than any KRP candidate has received in any election. Also, many new people gained experience in running a campaign, experience that will be very valuable in future elections. Furthermore, the primary goal of HRP has always been to reach people with their politics and not just to win elections. That goal has certainly been accomplished.

The one thing that becomes even more clear after this election is that HRP is truly a people's party; that is, without the support of the people (that means every one of you) it cannot survive and grow. There is still a lot of work that needs to be done. The office and personnel have to be re-organized to prepare for the monumental task of running a fall campaign (there are some 33 county and state offices to be elected in November), there is the ever-increasing work involved with City Council, and there is an on-going Education Committee that will be struggling throughout the year with issues dealing with the schools. If you would like to help, they need people power and money, stop by the HRP office at 304 S. Thayer or call 761-6650. The Human Rights Party is your party and it will only grow with your support. Come to the mass meetings at the office every third Thursday (call the office for the exact time and date). All major Party decisions are made at these open, democratic meetings, and all concerned members of the community are urged to attend. HUMAN POWER TO THE HUMANS. ALL POWER TO THE PEOPLE.