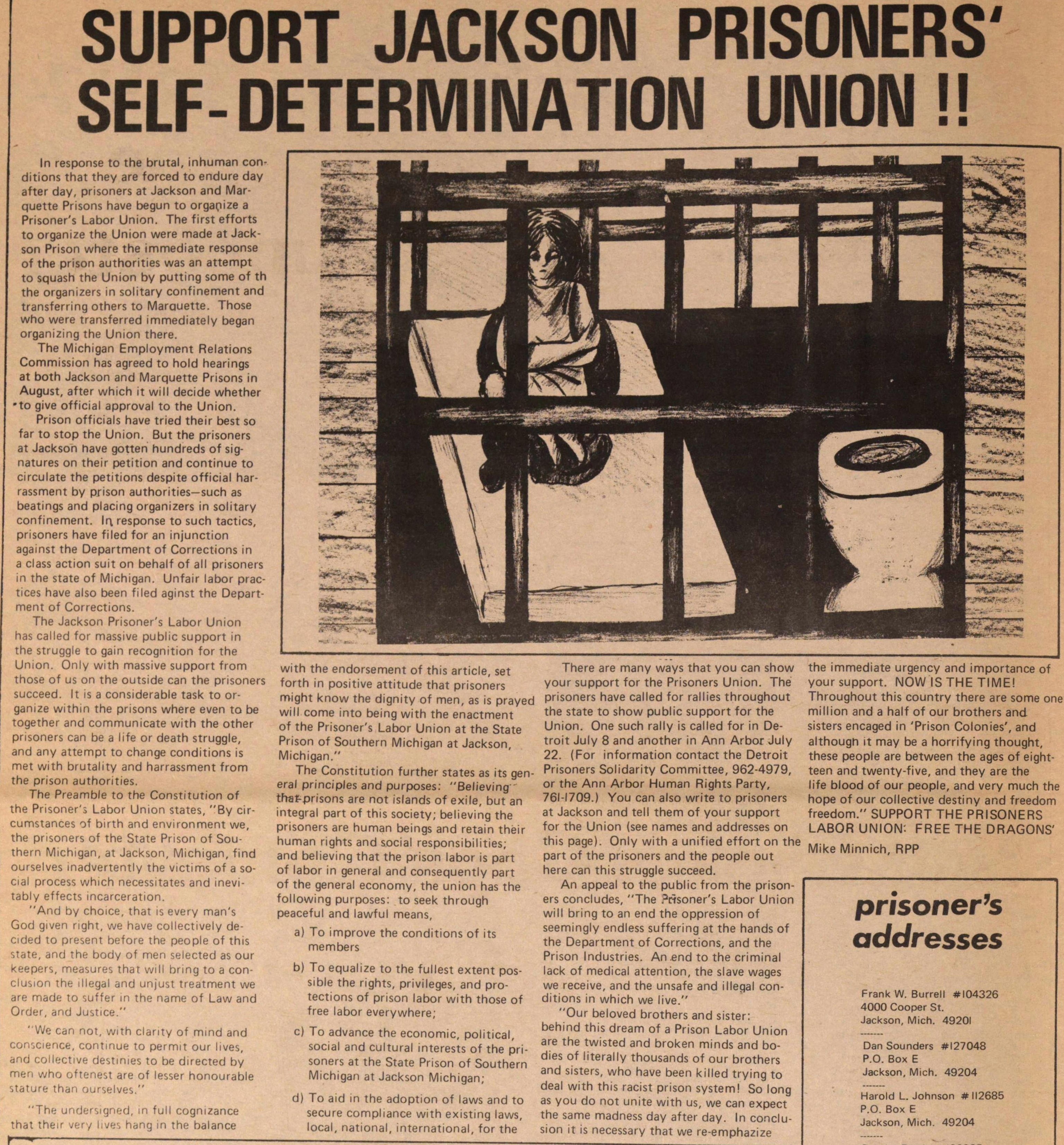 In response to the brutal, inhuman conditions that they are torced to endure day after day, prisoners at Jackson and Marquette Prisons have begun to organize a Prisoner's Labor Union. The first efforts to organize the Union were made at Jackson Prison where the immediate response of the prison authorities was an attempt to squash the Union by putting some of th the organizers in solitary confinement and transferring others to Marauette. Those who were transferred immediately began organizing the Union there. The Michigan Employment Relations Commission has agreed to hold hearings at both Jackson and Marquette Prisons in August, after which it will decide whether to give official approval to the Union. Prison officials have tried their best so far to stop the Union. But the prisoners at Jackson have gotten hundreds of signatures on their petition and continue to circuíate the petitions despite official harrassment by prison authorities- such as beatings and placing organizers in solitary confinement. In. response to such tactics, prisoners have filed for an injunction against the Department of Corrections in a class action suit on behalf of all prisoners in the state of Michigan. Unfair labor practices have also been filed aginst the Department of Corrections. The Jackson Prisoner's Labor Union has called for massive public support in the struggle to gain recognition for the Union. Only with massive support from those of us on the outside can the prisoners succeed. It is a considerable task to organize within the prisons where even to be together and communicate with the other prisoners can be a life or death struggle, and any attempt to change conditions is met with brutality and harrassment from the prison authorities. The Preamble to the Constitution of the Prisoner'3 Labor Union States, "By circumstances of birth and environment we, the prisoners of the State Prison of Southern Michigan, at Jackson, Michigan, find ourselves inadvertently the victims of a social process which necessitates and inevitably effects incarceration. "And by choice, that is every man's God given right, we have collectively decided to present before the people of this state, and the body of men selected as our keepers, measures that will bring to a conclusión the t llega) and unjust treatment we are made to suffer in the name of Law and Order, and Justice." "We can not, with clarity of mind and conscience, continue to permit our li ves, and collective destinies to be directed by men who oftenest are of lesser honourable stature than ourselves." "The undersigned, m full cognizance that their very lives hang in the balance with the endorsement of this article, set forth In positive attitude that prisoners might know the dignity of men, as s prayec will come into being with the enactment of the Prisoner's Labor Union at the State Prison of Southern Michigan at Jackson, Michigan." The Constitution further states as its gen eral principies and purposes: "Believing thai-prisons are not islands of exile, but an integral part of this society; believing the prisoners are human beings and retain their human rights and social responsibilities; and believing that the prison labor is part of labor in general and consequently part of the general economy, the unión has the following purposes: to seek through peaceful and lawful means, a) To mprove the conditions of its members b) To equalize to the fullest extent possible the rights, privileges, and protections of prison labor with those of free labor everywhere; c) To advance the economie, political, social and cultural interests of the prisoners at the State Prison of Southern Michigan at Jackson Michigan; d) To aid in the adoption of laws and to secure compliance with existing laws, local, national, international, for the There are many ways that you can show your support for the Prisoners Union. The I prisoners have called for rallies throughout the state to show public support for the Union. One such rally s called for in Detroit July 8 and another in Ann Arbor July 22. (For information contact the Detroit . Prisoners Solidarity Committee, 962-4979, or the Ann Arbor Human Rights Party, 761-1709.) You can also write to prisoners at Jackson and teil them of your support for the Union (see names and addresses on this page). Only with a unified effort on the part of the prisoners and the people out here can this struggle succeed. An appeal to the public from the prisoners concludes, "The Posoner's Labor Union will bring to an end the oppression of seemingly endless suffering at the hands of the Department of Corrections, and the Prison Industries. An end to the criminal lack of medical attention, the slave wages we receive, and the unsafe and illegal conditions in which we live." "Our beloved brothers and sister: behind this dream of a Prison Labor Union are the twisted and broken minds and bodies of literally thousands of our brothers and sisters, who have been killed trying to deal with this racist prison system! So long as you do not unite with us, we can expect the same madness day after day. In conclusión it is necessary that we re-emphazize the immediate urgency and mportance of your support. NOW IS THE TIME! Throughout this country there are some one million and a half of our brothers and sisters encaged n 'Prison Colonies', and althougn it may be a horrifying thought, these people are between the ages of eightteen and twenty-five, and they are the life blood of our people, and very much the hope of our collective destiny and freedom freedom." SUPPORT THE PRISONERS LABOR UNION: FREE THE DRAGONS' Mike Minnich, RPP