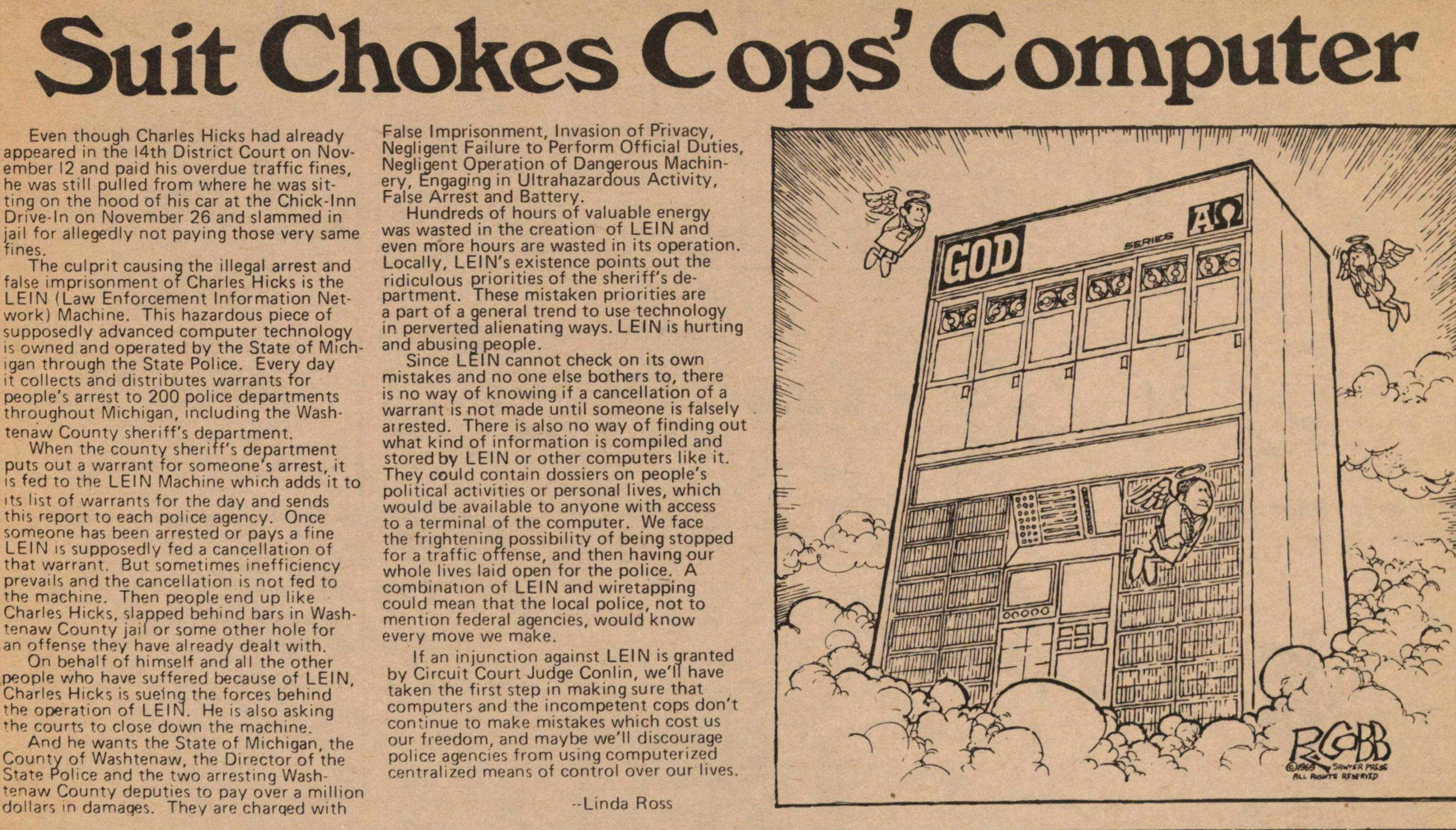 Even though Charles Hicks had already appeared in the I4th District Court on November 12 and paid his overdue traffic fines, he was still pulled from where he was sitting on the hood of his car at the Chick-lnn Drive-In on November 26 and slammed in jail for allegedly not paying those very same fines.

The culprit causing the illegal arrest and false imprisonment of Charles Hicks is the LEIN (Law Enforcement Information Network) Machine. This hazardous piece of supposedly advanced computer technology s owned and operated by the State of Michigan through the State Police. Every day t collects and distributes warrants for people's arrest to 200 police departments throughout Michigan, including the Washtenaw County sheriff's department.

When the county sheriff's department puts out a warrant for someone's arrest, it is fed to the LEIN Machine which adds it to its list of warrants for the day and sends this report to each police agency. Once someone has been arrested or pays a fine LEIN is supposedly fed a cancellation of that warrant. But sometimes inefficiency prevails and the cancellation is not fed to the machine. Then people end up like Charles Hicks, slapped behind bars in Washtenaw County jail or some other hole for an offense they have already dealt with.

On behalf of himself and all the other people who have suffered because of LEIN, Charles Hicks is suing the forces behind the operation of LEIN. He is also asking the courts to close down the machine.

And he wants the State of Michigan, the County of Washtenaw, the Director of the State Police and the two arresting Washtenaw County deputies to pay over a million dollars in damages. They are charged with False Imprisonment, Invasion of Privacy, Negligent Failure to Perform Official Duties, Negligent Operation of Dangerous Machinery, Engaging in Ultrahazardous Activity, False Arrest and Battery.

Hundreds of hours of valuable energy was wasted in the creation of LEIN and even more hours are wasted in its operation. Locally, LEIN's existence points out the ridiculous priorities of the sheriff's department. These mistaken priorities are a part of a general trend to use technology in perverted alienating ways. LEIN is hurting and abusing people.

Since LEIN cannot check on its own mistakes and no one else bothers to, there is no way of knowing if a cancellation of a warrant is not made until someone is falsely arrested. There is also no way of finding out what kind of information is compiled and stored by LEIN or other computers like it. They could contain dossiers on people's political activities or personal lives, which would be available to anyone with access to a terminal of the computer. We face the frightening possibility of being stopped for a traffic offense, and then having our whole lives laid open for the police. A combination of LEIN and wiretapping could mean that the local police, not to mention federal agencies, would know every move we make.

If an injunction against LEIN is granted by Circuit Court Judge Conlin, we'll have taken the first step in making sure that computers and the incompetent cops don't continue to make mistakes which cost us our freedom, and maybe we'll discourage police agencies from using computerized centralized means of control over our lives.