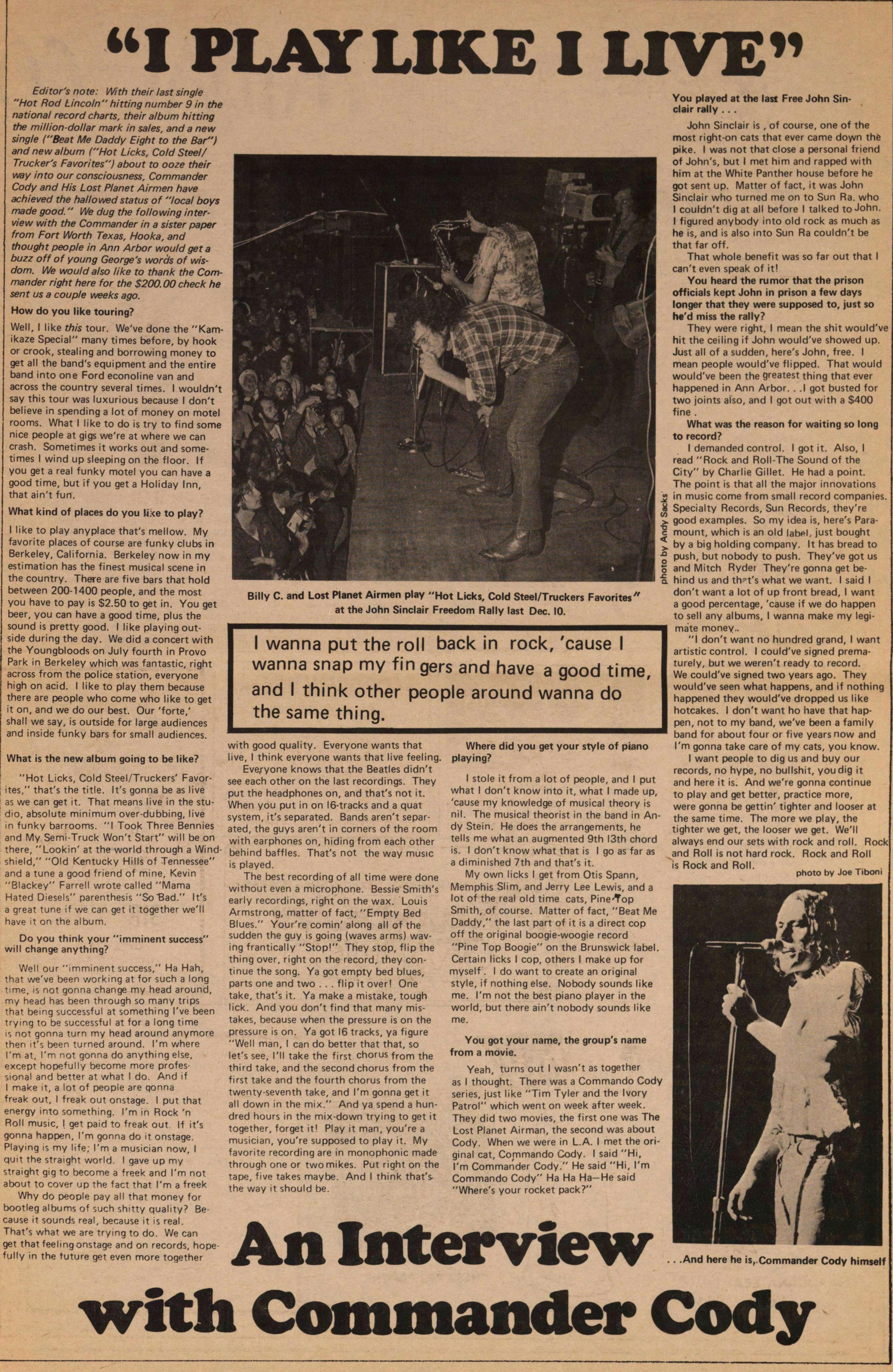 Editor's note: With their last single "Hot Rod Lincoln" hitting number 9 in the national record charts, their album hitting the million-dollar mark in sales, and a new single ("Beat Me Daddy Eight to the Bar") and new album ("Hot Licks, Cold Steel/Trucker's Favorites") about to ooze their way into our consciousness, Commander Cody and His Lost Planet Airmen have achieved the hallowed status of "local boys made good. " We dug the folio wing interview with the Commander in a sister paper from Fort Worth Texas, Hooka, and thought people in Ann Arbor would get a buzz off of young George's words of wisdom. We would also like to thank the Commander right here for the $200.00 check he sent us a couple weeks ago.

Well, I like this tour. We've done the "Kamikaze Special" many times before, by hook or crook, stealing and borrowing money to get all the band's equipment and the entire band into one Ford econoline van and across the country several times. I wouldn't say this tour was luxurious because I don't believe in spending a lot of money on motel rooms. What I like to do is try to find some nice people at gigs we're at where we can crash. Sometimes it works out and sometimes I wind up sleeping on the floor. If you get a real funky motel you can have a good time, but if you get a Holiday Inn, that ain't fun.

What kind of places do you like to play?

I like to play anyplace that's mellow. My favorite places of course are funky clubs in Berkeley, California. Berkeley now in my estimation has the finest musical scene in the country. There are five bars that hold between 200-1400 people, and the most you have to pay is $2.50 to get in. You get beer, you can have a good time, plus the sound is pretty good. I like playing outside during the day. We did a concert with the Youngbloods on July fourth in Provo Park in Berkeley which was fantastic, right across from the police station, everyone high on acid. I like to play them because there are people who come who like to get it on, and we do our best. Our 'forte,' shall we say, is outside for large audiences and inside funky bars for small audiences.

What is the new album going to be like?

"Hot Licks, Cold Steel/Truckers' Favorites," that's the title. It's gonna be as live as we can get it. That means live in the studio, absolute minimum over-dubbing, live in funky barrooms. "I Took Three Bennies and My Semi-Truck Won't Start" will be on there, "Lookin' at the world through a Windshield," "Old Kentucky Hills of Tennessee" and a tune a good friend of mine, Kevin "Blackey" Farrell wrote called "Mama Hated Diesels" parenthesis "So Bad." It's a great tune if we can get it together we'll have it on the album.

Do you think your "imminent success" will change anything?

Well our "imminent success," Ha Hah, that we've been working at for such a long time, is not gonna change my head around, my head has been through so many trips that being successful at something I've been trying to be successful at for a long time is not gonna turn my head around anymore then it's been turned around. I'm where I'm at, I'm not gonna do anything else, except hopefully become more professional and better at what I do. And if I make it, a lot of people are gonna freak out, I freak out onstage. I put that energy into something. I'm in Rock 'n Roll music, I get paid to freak out. If it's gonna happen, I'm gonna do it onstage. Playing is my life; I'm a musician now, I quit the straight world. I gave up my straight gig to become a freek and I'm not about to cover up the fact that I'm a freek.

Why do people pay all that money for bootleg albums of such shitty quality? Because it sounds real, because it is real. That's what we are trying to do. We can get that feeling onstage and on records, hopefully in the future get even more together with good quality. Everyone wants that live, I think everyone wants that live feeling.

Everyone knows that the Beatles didn't see each other on the last recordings. They put the headphones on, and that's not it. When you put in on 16-tracks and a quat system, it's separated. Bands aren't separated, the guys aren't in corners of the room with earphones on, hiding from each other behind baffles. That's not the way music is played.

The best recording of all time were done without even a microphone. Bessie Smith's early recordings, right on the wax. Louis Armstrong, matter of fact, "Empty Bed Blues." You're comin' along all of the sudden the guy is going (waves arms) waving frantically "Stop!" They stop, flip the thing over, right on the record, they continue the song. Ya got empty bed blues, parts one and two . . . flip it over! One take, that's it. Ya make a mistake, tough lick. And you don't find that many mistakes, because when the pressure is on the pressure is on. Ya got 16 tracks, ya figure "Well man, I can do better that that, so let's see, I'll take the first chorus from the third take, and the second chorus from the first take and the fourth chorus from the twenty-seventh take, and I'm gonna get it all down in the mix." And ya spend a hundred hours in the mix-down trying to get it together, forget it! Play it man, you're a musician, you're supposed to play it. My favorite recordings are in monophonic made through one or two mikes. Put right on the tape, five takes maybe. And I think that's the way it should be.

Where did you get your style of piano playing?

I stole it from a lot of people, and I put what I don't know into it, what I made up, 'cause my knowledge of musical theory is nil. The musical theorist in the band in Andy Stein. He does the arrangements, he tells me what an augmented 9th I3th chord is. I don't know what that is I go as far as a diminished 7th and that's it. My own licks I get from Otis Spann, Memphis Slim, and Jerry Lee Lewis, and a lot of the real old time cats, Pine-Top Smith, of course. Matter of fact, "Beat Me Daddy," the last part of it is a direct cop off the original boogie-woogie record "Pine Top Boogie" on the Brunswick label. Certain licks I cop, others I make up for myself . I do want to create an original style, if nothing else. Nobody sounds like me. I'm not the best piano player in the world, but there ain't nobody sounds like me.

You got your name, the group's name from a movie.

You played at the last Free John Sinclair rally . . .

John Sinclair is, of course, one of the most right-on cats that ever came down the pike. I was not that close a personal friend of John's, but I met him and rapped with him at the White Panther house before he got sent up. Matter of fact, it was John Sinclair who turned me on to Sun Ra. who I couldn't dig at all before I talked to John. I figured anybody into old rock as much as he is, and is also into Sun Ra couldn't be that far off.

That whole benefit was so far out that I can't even speak of it!

You heard the rumor that the prison officials kept John in prison a few days longer that they were supposed to, just so he'd miss the rally?

They were right, I mean the shit would've hit the ceiling if John would've showed up. Just all of a sudden, here's John, free. I mean people would've flipped. That would would've been the greatest thing that ever happened in Ann Arbor. . .

What was the reason for waiting so long to record?

I demanded control. I got it. Also, I read "Rock and Roll-The Sound of the City" by Charlie Gillet. He had a point. The point is that all the major innovations in music come from small record companies. Specialty Records, Sun Records, they're good examples. So my idea is, here's Paramount, which is an old label, just bought by a big holding company. It has bread to push, but nobody to push. They've got us and Mitch Ryder. They're gonna get behind us and that's what we want. I said I don't want a lot of up front bread, I want a good percentage, 'cause if we do happen to sell any albums, I wanna make my legitimate money.

"I don't want no hundred grand, I want artistic control. I could've signed prematurely, but we weren't ready to record. We could've signed two years ago. They would've seen what happens, and if nothing happened they would've dropped us like hotcakes. I don't want ho have that happen, not to my band, we've been a family band for about four or five years now and I'm gonna take care of my cats, you know.

I want people to dig us and buy our records, no hype, no bullshit, you dig it and here it is. And we're gonna continue to play and get better, practice more, were gonna be gettin' tighter and looser at the same time. The more we play, the tighter we get, the looser we get. We'll always end our sets with rock and roll. Rock and Roll is not hard rock. Rock and Roll is Rock and Roll. I wanna put the roll back in rock, 'cause I wanna snap my fingers and have a good time, and I think other people around wanna do the same thing.

An interview with Commander Cody