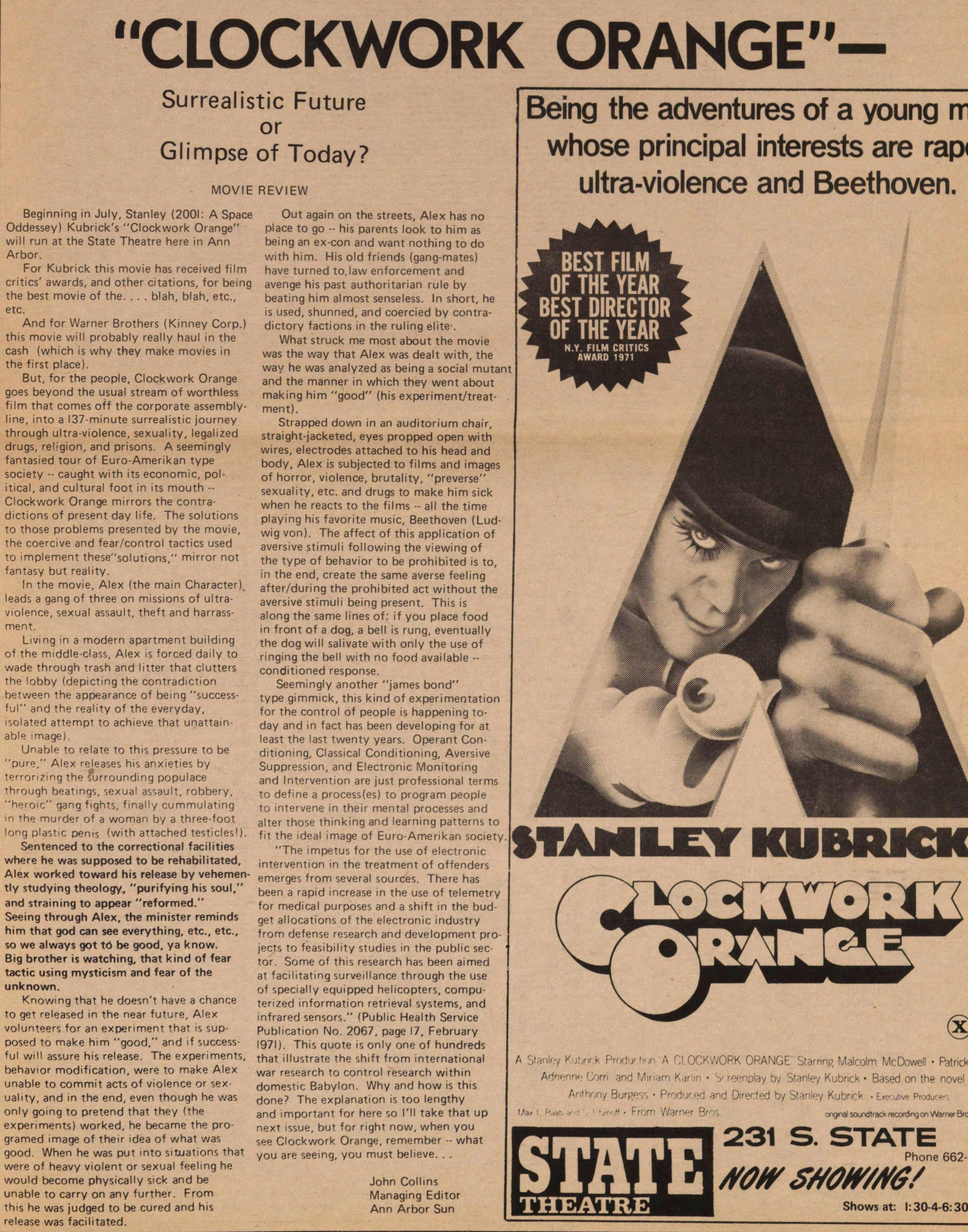 Beginning in July, Stanley (2001: A Space Oddessey) Kubrick's "Clockwork Orange" will run at the State Theatre here in Ann Arbor. For Kubrick this movie has received film critics' awards, and other citations, for being the best movie of the. . . . blah, blah, etc, etc. And for Warner Brothers (Kinney Corp.) this movie will probably really haul in the cash (which is why they make movies in the first place). But, for the people, Clockwork Orange goes beyond the usual stream of worthless film that comes off the corporate assemblyline, into a 137-minute surrealistic journey through ultra-violence, sexuality, legalized drugs, religión, and prisons. A seemingly fantasied tour of Euro-Amerikan type society - caught with its economie, political, and cultural foot in its mouth -- Clockwork Orange mirrors the contradictions of present day life. The solutions to those problems presented by the movie, the coercive and fearcontrol tactics used to mplement these"solutions," mirror not fantasy but reality. In the movie, Alex (the main Character) leads a gang of three on missions of ultraviolence, sexual assault, theft and harrassment. Living in a modern apartment building of the middle-class, Alex is forced daily to wade through trash and litter that clutters the lobby (depicting the contradiction between the appearance of being "successful" and the reality of the everyday, isolated attempt to achieve that unattainable image). Unable to relate to this pressure to be "pure," Alex releases his anxieties by terronzing the surrounding populace through beatings, sexual assault, robbery, "heroic" gang fights, final I y cummulating in rhe murder of a woman by a three-foot long plastic penis (with attached testiclesl). Sentenced to the correctional facilities where he was supposed to be rehabilitated, Alex worked toward his release by vehemently studying theology, "purifying his soul," and straining to appear "reformed." Seeing through Alex, the minister reminds him that god can see everything, etc., etc., so we always got tó be good, y a know. Big brother is watching, that kind of fear tactic using mysticism and fear of the unknown. Knowmg that he doesn't have a chance to get released in the near future, Alex volunteers for an experiment that is supposed to make him "good," and f successful will assure his release. The experiments, behavior modification, were to make Alex unable to commit acts of violence or sexuality, and in the end, even though he was only going to pretend that they (the experiments) worked, he became the programed image of their idea of what was good. When he was put mto situations that were of heavy violent or sexual feeling he would become physically sick and be unable to carry on any further. From this he was judged to be cured and his release was facilitated. ! Out again on the streets, Alex has no place to go -- his parents look to him as being an ex-con and want nothing to do with him. His old friends (gang-mates) have turned to. law enforcement and avenge his past authoritarian rule by beating him almost senseless. In short, he is used, shunned, and coercied by contradictory factions in the ruling elite'. What struck me most about the movie was the way that Alex was dealt with, the way he was analyzed as being a social mutan and the manner in which they went about making him "good" (his experimenttreatment). Strapped down in an auditorium chair, straight-jacketed, eyes propped open with wires, electrodes attached to his head and body, Alex is subjected to films and images of horror, violence, brutality, "preverse" sexuality, etc. and drugs to make him sick when he reacts to the films - all the time playing his favorite music, Beethoven (Ludwig von). The affect of this application of aversive stimuli following the viewing of the type of behavior to be prohibited is to, in the end, créate the same averse feeling afterduring the prohibited act without the aversive stimuli being present. This is along the same lines of: if you place food in front of a dog, a bell is rung, eventually the dog will salivate with only the use of ringing the bell with no food available -- conditioned response. Seemingly another "james bond" type gimmick, this kind of experimentation for the control of people is happening today and in fact has been developing for at least the last twenty years. Operant Conditioning, Classical Conditioning, Aversive Suppression, and Electronic Monitoring and Intervention are just professional terms to define a process(es) to program people to intervene in their mental processes and alter those thinking and learning patterns to fit the deal image of Euro-Amerikan society. "The Ímpetus for the use of electronic intervention in the treatment of offenders emerges from several sources. There has been a rapid increase in the use of telemetry for medical purposes and a shift in the budget allocations of the electronic industry from defense research and development projects to feasibility studies in the public ' tor. Some of this research has been aimed at facilitating surveillance through the use of specially equipped helicopters, computerized information retrieval systems, and nfrared sensors." (Public Health Service Publication No. 2067, page 17, February 1971). This quote is only one of hundreds that Ilústrate the shift from international war research to control research within domestic Babyion. Why and how is this done? The explanation is too lengthy and important for here so l'll take that up next issue, but for right now, when you ■ see Clockwork Orange, remember - what you are seeing, you must believe. . . Managing Editor Ann Arbor Sun