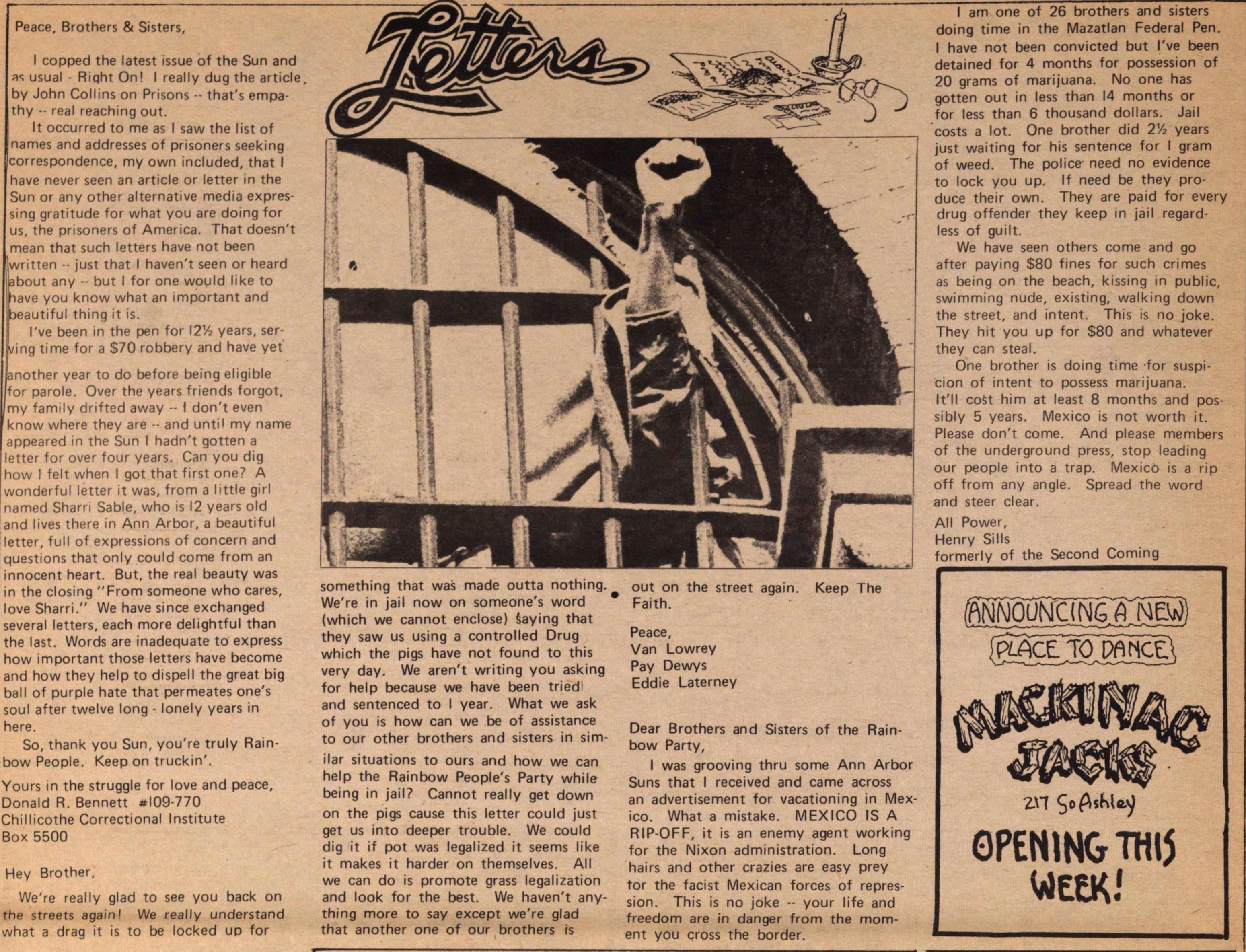 Peace, Brothers & Sisters, I copped the latest issue of the Sun and as usual - Right On! I really dug the article by John Collins on Prisons - that's empathy -- real reaching out.

It occurred to me as I saw the list of names and addresses of prisoners seeking correspondence, my own included, that I have never seen an article or letter in the Sun or any other alternative media expressing gratitude for what you are doing for us, the prisoners of America. That doesn't mean that such letters have not been written - just that I haven't seen or heard about any - but I for one would like to have you know what an important and beautiful thing it is.

I've been in the pen for 12 1/2 years, serving time for a $70 robbery and have yet another year to do before being eligible for parole. Over the years friends forgot, my family drifted away - don't even [know where they are - and until my name appeared in the Sun I hadn't gotten a letter for over four years. Can you dig how I felt when I got that first one? A wonderful letter it was, from a little girl named Sharri Sable, who is 12 years old and lives there in Ann Arbor, a beautiful letter, full of expressions of concern and questions that only could come from an innocent heart. But, the real beauty was in the closing "From someone who cares, love Sharri." We have since exchanged several letters, each more delightful than the last. Words are inadequate to express how important those letters have become and how they help to dispel the great big ball of purple hate that permeates one's soul after twelve long - lonely years in here.

So, thank you Sun, you're truly Rainbow People. Keep on truckin'.

Yours in the struggle for love and peace,
Donald R. Bennett #109-770
Chillicothe Correctional Institute
Box 5500

We're really glad to see you back on the streets again! We really understand what a drag it is to be locked up for something that was made outta nothing. We're in jail now on someone's word (which we cannot enclose) saying that they saw us using a controlled Drug which the pigs have not found to this very day. We aren't writing you asking for help because we have been tried and sentenced to 1 year. What we ask of you is how can we be of assistance to our other brothers and sisters in similar situations to ours and how we can help the Rainbow People's Party while being in jail? Cannot really get down on the pigs cause this letter could just get us into deeper trouble. We could dig it if pot was legalized it seems like it makes it harder on themselves. All we can do is promote grass legalization and look for the best. We haven't anything more to say except we're glad that another one of our brothers is out on the street again. Keep The Faith.

Dear Brothers and Sisters of the Rainbow Party,

I was grooving thru some Ann Arbor Suns that I received and came across an advertisement for vacationing in Mexico. What a mistake. MEXICO IS A RIP-OFF, it is an enemy agent working for the Nixon administration. Long hairs and other crazies are easy prey tor the fascist Mexican forces of repression. This is no joke - your life and freedom are in danger from the moment you cross the border.

I am one of 26 brothers and sisters doing time n the Mazatlan Federal Pen. I have not been convicted but I've been detained for 4 months for possession of 20 grams of marijuana. No one has gotten out in less than 14 months or for less than 6 thousand dollars. Jail costs a lot. One brother did 2 1/2 years just waiting for his sentence for I gram of weed. The police need no evidence to lock you up. If need be they produce their own. They are paid for every drug offender they keep in jail regardless of guilt.

We have seen others come and go after paying $80 fines for such crimes as being on the beach, kissing in public, swimming nude, existing, walking down the street, and intent. This s no joke. They hit you up for $80 and whatever they can steal.

One brother is doing time for suspicion of intent to possess marijuana. It'll cost him at least 8 months and possibly 5 years. Mexico is not worth it. Please don't come. And please members of the underground press, stop leading our people into a trap. Mexico is a rip off from any angle. Spread the word and steer clear.

All Power,
Henry Sills
formerly of the Second Coming