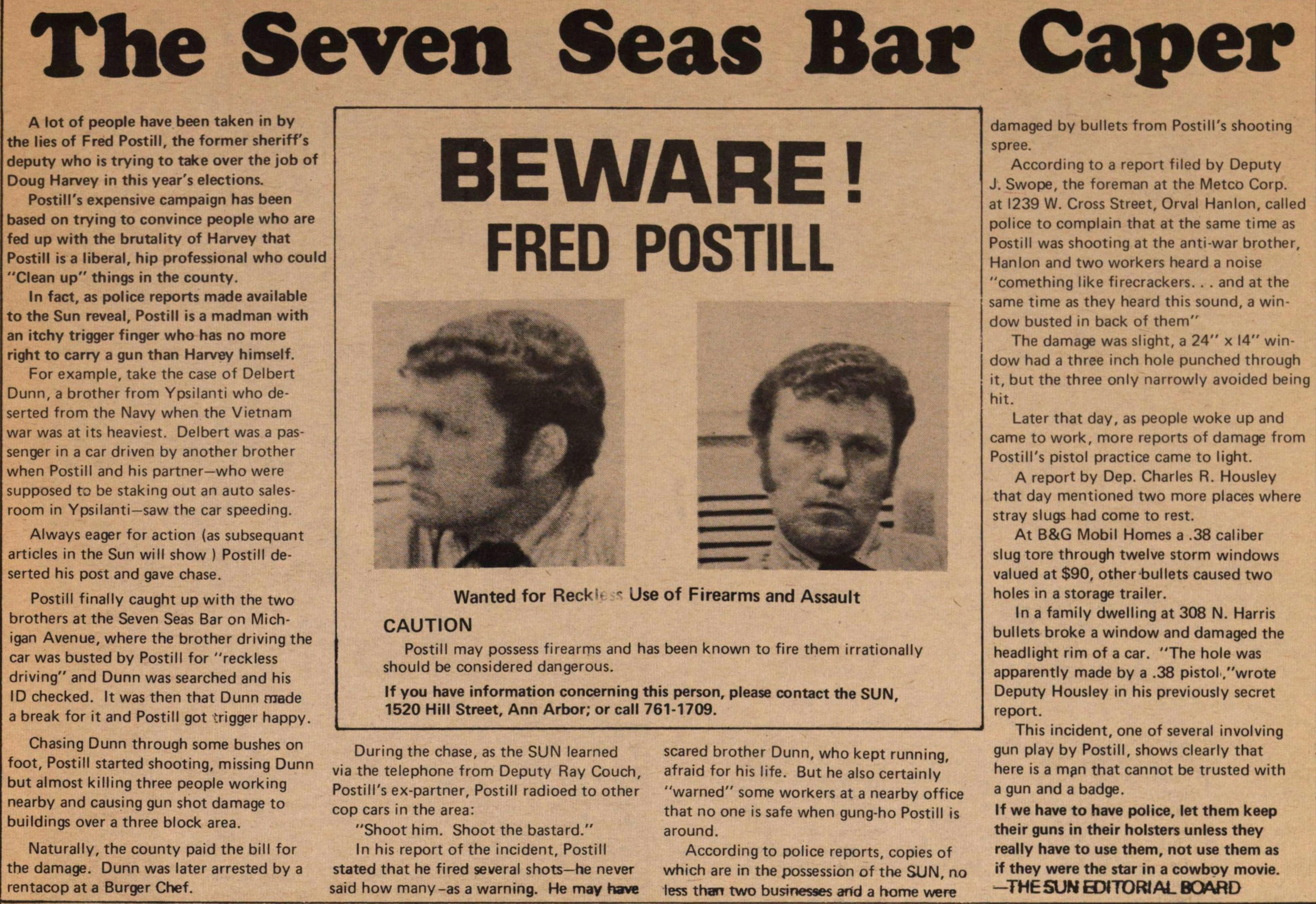 Wanted for Reckless Use of Firearms and Assault

Caution  Postill may possess firearms and has been known to fire them irrationally should be considered dangerous.  If you have information concerning this person, please contact the SUN, 1520 Hill Street, Ann Arbor; or call 761-1709

A lot of people have been taken in by the lies of Fred Postill, the former sheriff's deputy who is trying to take over the job of Doug Harvey in this year's elections.

Postill's expensive campaign has been based on trying to convince people who are fed up with the brutality of Harvey that Postill is a liberal, hip professional who could "Clean up" things in the county.

In fact, as police reports made available to the Sun reveal, Postill is a madman with an itchy trigger finger who has no more right to carry a gun than Harvey himself.

For example, take the case of Delbert Dunn, a brother from Ypsilanti who deserted from the Navy when the Vietnam war was at its heaviest. Delbert was a passenger in a car driven by another brother when Postill and his partner- who were supposed to be staking out an auto salesroom in Ypsilanti- saw the car speeding.

Always eager for action (as subsequent articles in the Sun will show ) Postill deserted his post and gave chase.

Postill finally caught up with the two brothers at the Seven Seas Bar on Michigan Avenue, where the brother driving the car was busted by Postill for "reckless driving" and Dunn was searched and his ID checked. It was then that Dunn made a break for it and Postill got trigger happy.

Naturally, the county paid the bill for the damage. Dunn was later arrested by a rent-a-cop at a Burger Chef.

During the chase, as the SUN learned via the telephone from Deputy Ray Couch, Postill's ex-partner, Postill radioed to other cop cars in the area: "Shoot him. Shoot the bastard."

In his report of the incident, Postill stated that he fired several shots- he never said how many-as a warning. He may have scared brother Dunn, who kept running, afraid for his life. But he also certainly "warned" some workers at a nearby office that no one is safe when gung-ho Postill is around.

According to police reports, copies of which are in the possession of the SUN, no less than two businesses and a home were damaged by bullets from Postill's shooting spree.

According to a report filed by Deputy J. Swope, the foreman at the Metco Corp. at 1239 W. Cross Street, Orval Hanlon, called police to complain that at the same time as Postill was shooting at the anti-war brother, Hanlon and two workers heard a noise "something like firecrackers. . . and at the same time as they heard this sound, a window busted in back of them."

The damage was slight, a 24" x 14" window had a three inch hole punched through it, but the three only narrowly avoided being hit.

Later that day, as people woke up and came to work, more reports of damage from Postill's pistol practice came to light.

A report by Dep. Charles R. Housley that day mentioned two more places where stray slugs had come to rest.

At B&G Mobil Homes a .38 caliber slug tore through twelve storm windows valued at $90, other bullets caused two holes in a storage trailer.

In a family dwelling at 308 N. Harris bullets broke a window and damaged the headlight rim of a car. "The hole was apparently made by a .38 pistol." wrote Deputy Housley in his previously secret report.

This incident, one of several involving gun play by Postill, shows clearly that here is a man that cannot be trusted with a gun and a badge.

If we have to have police, let them keep their guns in their holsters unless they really have to use them, not use them as if they were the star in a cowboy movie.

-THE SUN EDITORIAL BOARD