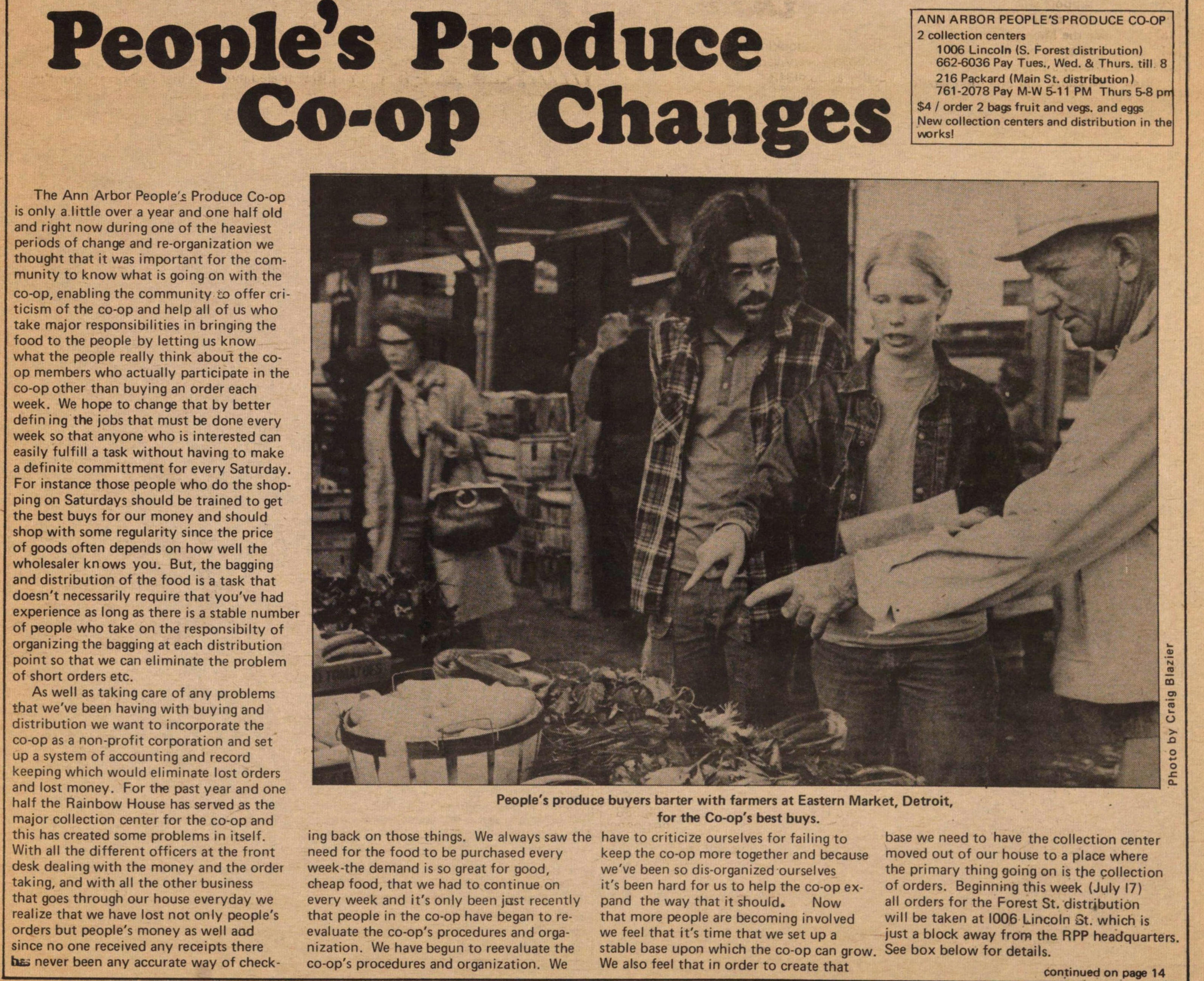 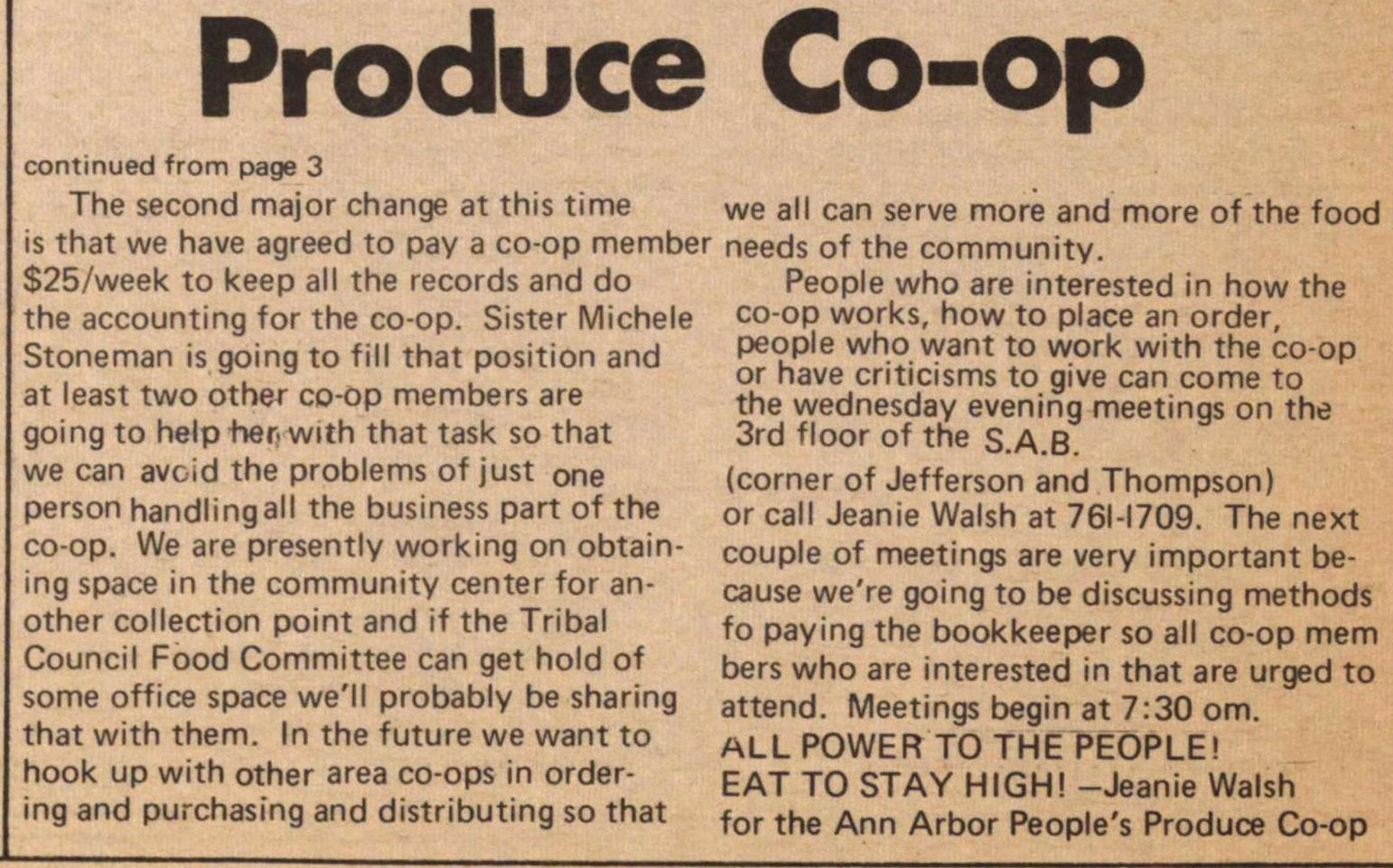 ANN ARBOR PEOPLE'S PRODUCE CO-OP 2 collection centers 1006 Lincoln (S. Forest distribution) 662-6036 Pay Tues., Wed. & Thurs. till 8 216 Packard (Main St. distribution) 761-2078 Pay M-W 5-11 PM Thurs 5-8 prr $4 order 2 bags fruit and vegs. and eggs New collection centers and distribution in the works! The Ann Arbor People'.s Produce Co-op s only a little over a year and one half old and right now during one of the heaviest periods of change and re-organization we thought that t was important for the community to know what is going on with the co-op, enabling the community io offer criticism of the co-op and help all of us who take major responsibilities in bringing the food to the people by letting us know what the people really think about the coop members who actually particípate in the co-op other than buying an order each week. We hope to change that by bette r defin ing the jobs that must be done every week so that anyone who is interested can easily fulfill a task without having to make a definite committment for every Saturday. For nstance those people who do the shopping on Saturdays should be trained to get the best buys for our money and should shop with some regularity since the price of goods often depends on how well the wholesaler knows you. But, the bagging and distribution of the food is a task that doesn't necessarily require that you've had experience as long as there is a stable number of people who take on the responsibilty of organizing the bagging at each distribution point so that we can elimínate the problem of short orders etc. As well as taking care of any problems that we've been having with buying and distribution we want to incorpórate the co-op as a non-prof it Corporation and set up a system of accounting and record keeping which would elimínate lost orders and lost money. For the past year and one half the Rainbow House has served as the major collection center for the co-op and this has created some problems in itself. With all the different officers at the front desk dealing with the money and the order taking, and with all the other business that goes through our house everyday we realize that we have lost not only people's orders but people's money as well aod since no one received any receipts there hLj never been any accurate way of ing back on those things. We always saw the need for the food to be purchased every week-the demand is so great for good, cheap food, that we had to continue on every week and it's only been jast recently that people in the co-op have began to reevaluate the co-op's procedures and organization. We have begun to reevaluate the co-op's procedures and organization. We have to criticize ourselves for failing to keep the co-op more together and because we've been so dis-organized ourselves it's been hard for us to help the co-op expand the way that t should. Now that more people are becoming nvolved we feel that it's time that we set up a stable base upon which the co-op can grow. We also feel that n order to créate that base we need to have the collection center moved out of our house to a place where the primary thing going on s the collection of orders. Beginning this week (July 17) all orders for the Forest St. distribution will be taken at 1006 Lincoln St. which is just a block away from the RPP headquarters. See box below for details. continued on page 14 Produce Co-op continued from page 3 The second major change at this time is that we have agreed to pay a co-op member $25week to keep all the records and do the accounting for the co-op. Sister Michele Stoneman is going to fill that position and at least two other co-op members are going to help her. with that task so that we can avoid the problems of just one person handling all the business part of the co-op. We are presently working on obtaining space in the community center for another collection point and if the Tribal Council Food Committee can get hold of some office space we'll probably be sharing that with them. In the future we want to hook up with other area co-ops in ordering and purchasing and distributing so that we all can serve more and more of the food needs of the community. People who are interested in how the co-op works, how to place an order, people who want to work with the co-op or have criticisms to give can come to the wednesday evening meetings on the 3rd floor of the S.A.B (corner of Jefferson and Thompson) or cali Jeanie Walsh at 761-1709. The next couple of meetings are very important because we're going to be discussing methods fo paying the bookkeeper so all co-op mem bers who are interested in that are urged to attend. Meetings begin at 7:30 om. ALL POWER TO THE PEOPLE! E AT TO STA Y HIGH! -Jeanie Walsh for the Ann Arbor People's Produce Co-op