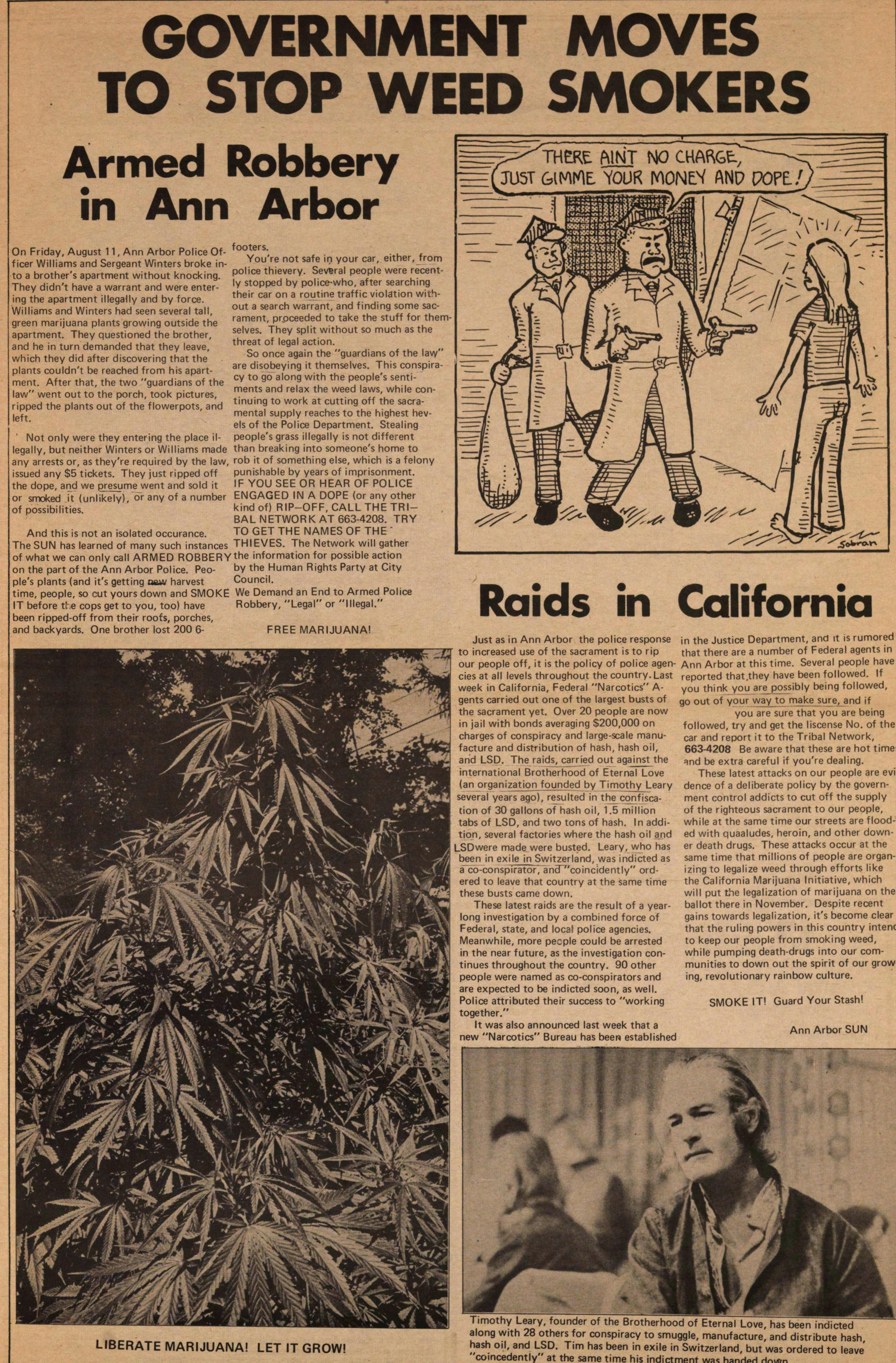 On Friday, August 11, Ann Arbor Police Officer Williams and Sergeant Winters broke into a brother's apartment without knocking. They didn't have a warrant and were entering the apartment illegally and by force. Williams and Winters had seen several tall, green marijuana plants growing outside the apartment. They questioned the brother, and he in turn demanded that they leave, which they did after discovering that the plants couldn't be reached from his apartment. After that, the two "guardians of the law" went out to the porch, took pictures, ripped the plants out of the flowerpots, and left.

Not only were they entering the place illegally, but neither Winters or Williams made any arrests or, as they're required by the law, issued any $5 tickets. They just ripped off the dope, and we presume went and sold it or smoked it (unlikely), or any of a number of possibilities.

And this is not an isolated occurrence. The SUN has learned of many such instances of what we can only call ARMED ROBBERY on the part of the Ann Arbor Police. People's plants (and it's getting new harvest time, people, so cut yours down and SMOKE IT before the cops get to you, too) have been ripped-off from their roofs, porches, and backyards. One brother lost 200 6-footers.

You're not safe in your car, either, from police thievery. Several people were recently stopped by police-who, after searching their car on a routine traffic violation without a search warrant, and finding some sacrament, proceeded to take the stuff for themselves. They split without so much as the threat of legal action.

So once again the "guardians of the law" are disobeying it themselves. This conspiracy to go along with the people's sentiments and relax the weed laws, while continuing to work at cutting off the sacramental supply reaches to the highest levels of the Police Department. Stealing people's grass illegally is not different than breaking into someone's home to rob it of something else, which is a felony punishable by years of imprisonment. IF YOU SEE OR HEAR OF POLICE ENGAGED IN A DOPE (or any other kind of) RIP-OFF, CALL THE TRIBAL NETWORK AT 663-4208. TRY TO GET THE NAMES OF THE " THIEVES. The Network will gather the information for possible action by the Human Rights Party at City Council.

We Demand an End to Armed Police Robbery, "Legal" or "Illegal."