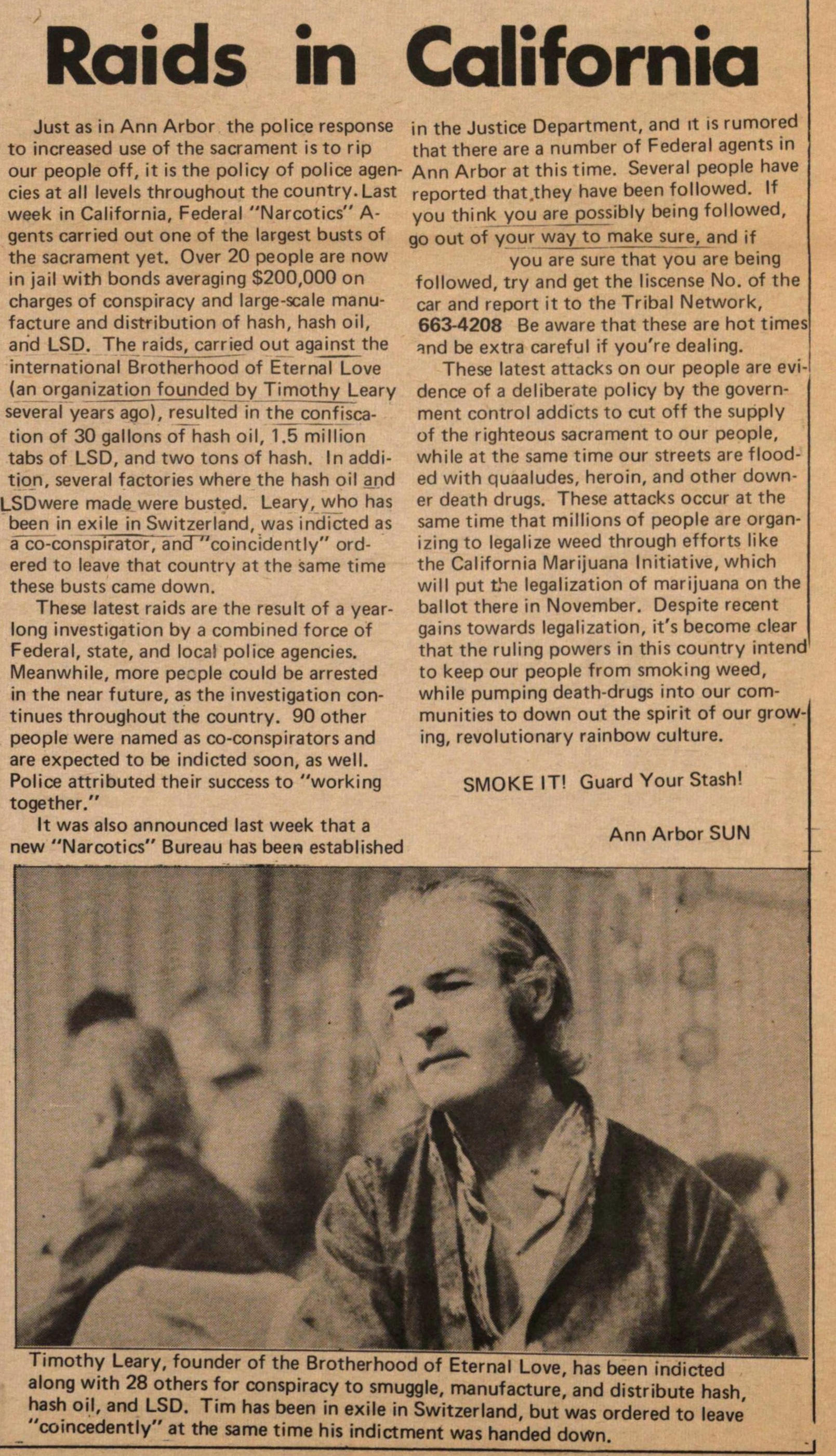 Just as in Ann Arbor the police response to increased use of the sacrament is to rip our people off, it is the policy of police agencies at all levels throughout the country. Last week in California, Federal "Narcotics" Agents carried out one of the largest busts of the sacrament yet. Over 20 people are now in jail with bonds averaging $200,000 on charges of conspiracy and large-scale manufacture and distribution of hash, hash oil, and LSD. The raids, carried out against the international Brotherhood of Eternal Love (an organization founded by Timothy Leary several years ago), resulted in the confiscation of 30 gallons of hash oil, 1.5 million tabs of LSD, and two tons of hash. In addition, several factories where the hash oil and LSD were made were busted. Leary, who has been in exile in Switzerland, was indicted as a co-conspirator, and "coincidently" ordered to leave that country at the same time these busts came down.

These latest raids are the result of a year-long investigation by a combined force of Federal, state, and local police agencies. Meanwhile, more people could be arrested in the near future, as the investigation continues throughout the country. 90 other people were named as co-conspirators and are expected to be indicted soon, as well. Police attributed their success to "working together."

It was also announced last week that a new "Narcotics" Bureau has been established in the Justice Department, and it is rumored that there are a number of Federal agents in Ann Arbor at this time. Several people have reported that they have been followed. If you think you are possibly being followed, go out of your way to make sure, and if you are sure that you are being followed, try and get the license number of the car and report it to the Tribal Network, 663-4208 Be aware that these are hot times and be extra careful if you're dealing.

These latest attacks on our people are evidence of a deliberate policy by the government control addicts to cut off the supply of the righteous sacrament to our people, while at the same time our streets are flooded with Quaaludes, heroin, and other downer death drugs. These attacks occur at the same time that millions of people are organizing to legalize weed through efforts like the California Marijuana Initiative, which will put the legalization of marijuana on the ballot there in November. Despite recent gains towards legalization, it's become clear that the ruling powers in this country intend to keep our people from smoking weed, while pumping death-drugs into our communities to drown out the spirit of our growing, revolutionary rainbow culture.

SMOKE IT! Guard Your Stash!

[Photo of Timothy Leary Inset]
Timothy Leary, founder of the Brotherhood of Eternal Love, has been indicted along with 28 others for conspiracy to smuggle, manufacture, and distribute hash, hash oil, and LSD. Tim has been in exile in Switzerland, but was ordered to leave “coincidentally” at the same time his indictment was handed down.