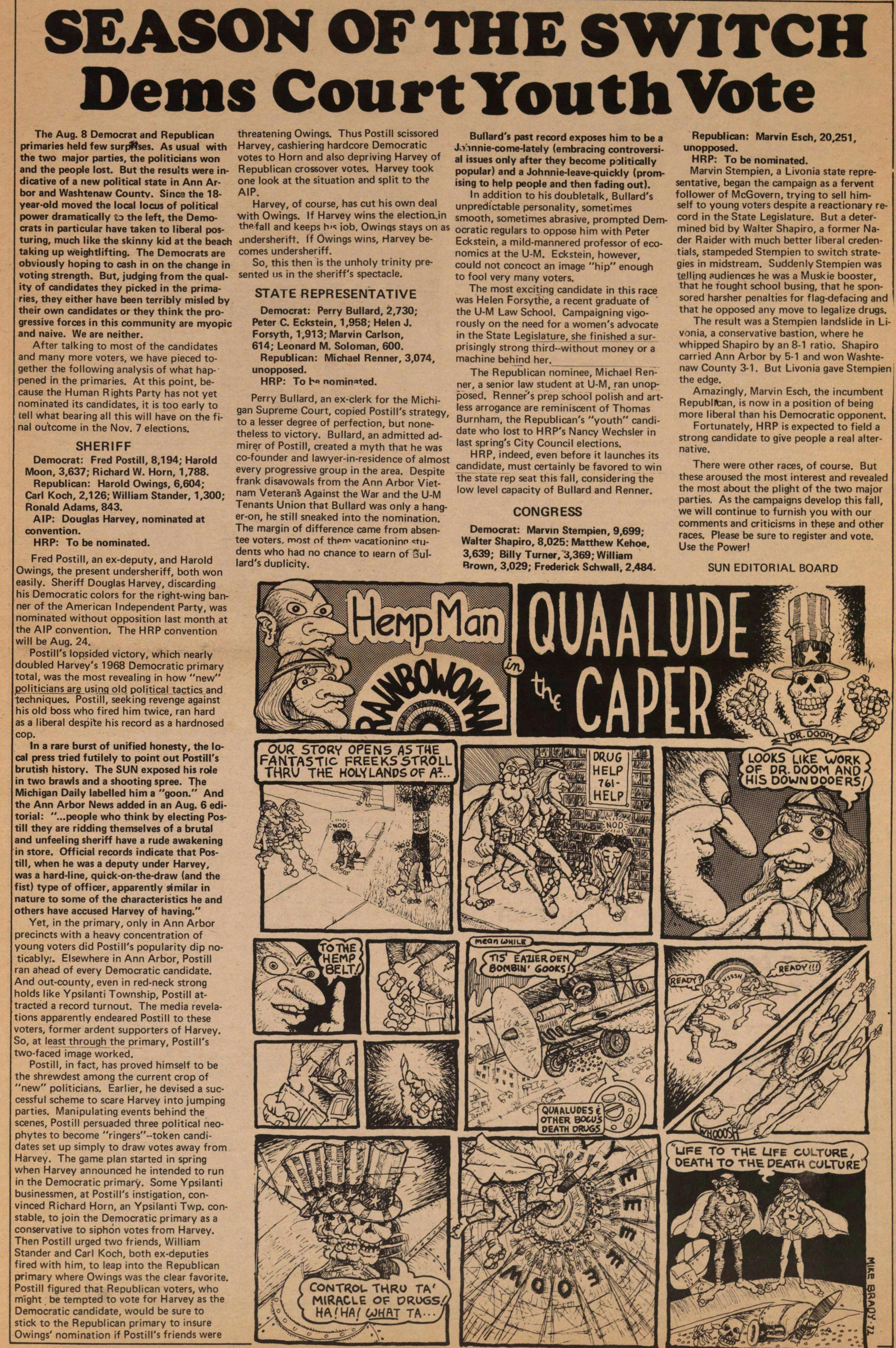 The Aug. 8 Democrat and Republican primaries held few surprises. As usual with the two major parties, the politicians won and the people lost. But the results were indicative of a new political state in Ann Arbor and Washtenaw County. Since the 18-year-old moved the local locus of political power dramatically to the left, the Democrats in particular have taken to liberal posturing, much like the skinny kid at the beach taking up weightlifting. The Democrats are obviously hoping to cash in on the change in voting strength. But, judging from the quality of candidates they picked in the primaries, they either have been terribly misled by their own candidates or they think the progressive forces in this community are myopic and naive. We are neither.

After talking to most of the candidates and many more voters, we have pieced together the following analysis of what happened in the primaries. At this point, because the Human Rights Party has not yet nominated its candidates, it is too early to tell what bearing all this will have on the final outcome in the Nov. 7 elections.

Fred Postill, an ex-deputy, and Harold Owings, the present undersheriff, both won easily. Sheriff Douglas Harvey, discarding his Democratic colors for the right-wing banner of the American Independent Party, was nominated without opposition last month at the AIP convention. The HRP convention will be Aug. 24.

Postill's lopsided victory, which nearly doubled Harvey's 1968 Democratic primary total, was the most revealing in how "new" politicians are using old. political tactics and techniques. Postill, seeking revenge against his old boss who fired him twice, ran hard as a liberal despite his record as a hardnosed cop.

In a rare burst of unified honesty, the local press tried futilely to point out Postill's brutish history. The SUN exposed his role in two brawls and a shooting spree. The Michigan Daily labelled him a "goon." And the Ann Arbor News added in an Aug. 6 editorial: "...people who think by electing Postill they are ridding themselves of a brutal and unfeeling sheriff have a rude awakening in store. Official records indicate that Postill, when he was a deputy under Harvey, was a hardline, quick-on-the-draw (and the fist) type of officer, apparently similar in nature to some of the characteristics he and others have accused Harvey of having."

Yet, in the primary, only in Ann Arbor precincts with a heavy concentration of young voters did Postill's popularity dip noticeably. Elsewhere in Ann Arbor, Postill ran ahead of every Democratic candidate. And out-county, even in red-neck strong holds like Ypsilanti Township, Postill attracted a record turnout. The media revelations apparently endeared Postill to these voters, former ardent supporters of Harvey. So, at least through the primary, Postill's two-faced image worked.

Postill, in fact, has proved himself to be the shrewdest among the current crop of "new" politicians. Earlier, he devised a successful scheme to scare Harvey into jumping parties. Manipulating events behind the scenes, Postill persuaded three political neophytes to become "ringers"--token candidates set up simply to draw votes away from Harvey. The game plan started in spring when Harvey announced he intended to run in the Democratic primary. Some Ypsilanti businessmen, at Postill's instigation, convinced Richard Horn, an Ypsilanti Twp. constable, to join the Democratic primary as a conservative to siphon votes from Harvey. Then Postill urged two friends, William Stander and Cari Koch, both ex-deputies fired with him, to leap into the Republican primary where Owings was the clear favorite. Postill figured that Republican voters, who might be tempted to vote for Harvey as the Democratic candidate, would be sure to stick to the Republican primary to ensure Owings' nomination if Postill's friends were threatening Owings. Thus Postill scissored Harvey, cashiering hardcore Democratic votes to Horn and also depriving Harvey of Republican crossover votes. Harvey took one look at the situation and split to the AIP.

Harvey, of course, has cut his own deal with Owings. If Harvey wins the election in the fall and keeps his job. Owings stays on as undersheriff. If Owings wins, Harvey becomes undersheriff.

So, this then is the unholy trinity presented us in the sheriff's spectacle.

HRP: To be nominated.

Perry Bullard, an ex-clerk for the Michigan Supreme Court, copied Postill's strategy, to a lesser degree of perfection, but nonetheless to victory. Bullard, an admitted admirer of Postill, created a myth that he was co-founder and lawyer-in-residence of almost every progressive group in the area. Despite frank disavowals from the Ann Arbor Vietnam Veterans Against the War and the U-M Tenants Union that Bullard was only a hanger-on, he still sneaked into the nomination. The margin of difference came from absentee voters. most of them vacationing students who had no chance to learn of Bullard's duplicity.

Bullard's past record exposes him to be a Johnnie-come-lately (embracing controversial issues only after they become politically popular) and a Johnnie-leave-quickly (promising to help people and then fading out).

In addition to his doubletalk, Bullard's unpredictable personality, sometimes smooth, sometimes abrasive, prompted Democratic regulars to oppose him with Peter Eckstein, a mild-mannered professor of economics at the U-M. Eckstein, however, could not concoct an image "hip" enough to fool very many voters.

The most exciting candidate in this race was Helen Forsythe, a recent graduate of the U-M Law School. Campaigning vigorously on the need for a women's advocate in the State Legislature, she finished a surprisingly strong third-without money or a machine behind her.

HRP, indeed, even before it launches its candidate, must certainly be favored to win the state rep seat this fall, considering the low level capacity of Bullard and Renner.

HRP: To be nominated.

Marvin Stempien, a Livonia state representative, began the campaign as a fervent follower of McGovern, trying to sell himself to young voters despite a reactionary record in the State Legislature. But a determined bid by Walter Shapiro, a former Nader Raider with much better liberal credentials, stampeded Stempien to switch strategies in midstream. Suddenly Stempien was telling audiences he was a Muskie booster, that he fought school busing, that he sponsored harsher penalties for flag-defacing and that he opposed any move to legalize drugs.

The result was a Stempien landslide in Livonia, a conservative bastion, where he whipped Shapiro by an 8-1 ratio. Shapiro carried Ann Arbor by 5-1 and won Washtenaw County 3-1. But Livonia gave Stempien the edge.

Amazingly, Marvin Esch, the incumbent Republican, is now in a position of being more liberal than his Democratic opponent. Fortunately, HRP is expected to field a strong candidate to give people a real alternative.

There were other races, of course. But these aroused the most interest and revealed the most about the plight of the two major parties. As the campaigns develop this fall, we will continue to furnish you with our comments and criticisms in these and other races. Please be sure to register and vote.