An Interview With The Boogie Brothers 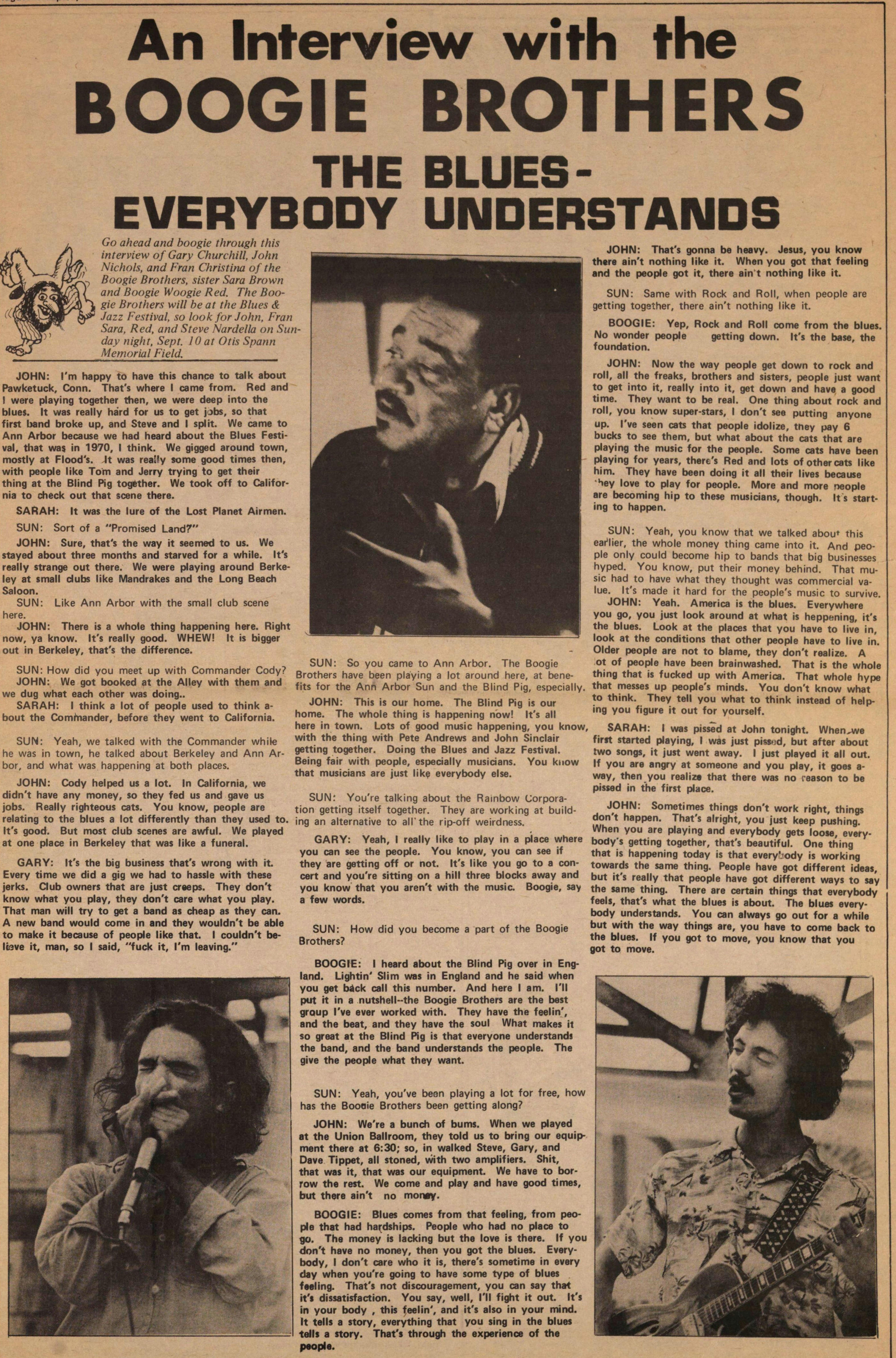 An Interview with the

THE BLUES - EVERYBODY UNDERSTANDS

Go ahead and boogie through this interview of Gary Churchill, John Nichols, and Fran Christina of the Boogie Brothers, sister Sara Brown and Boogie Woogie Red. The Boogie Brothers will be at the Blues & Jazz Festival, so look for John, Fran Sara, Red, and Steve Nardella on Sunday night, Sept. 10 at Otis Spann Memorial Field.

JOHN: I’m happy to have this chance to talk about Pawketuck, Conn. That’s where I came from. Red and I were playing together then, we were deep into the blues. It was really hard for us to get jobs, so that first band broke up, and Steve and I split. We came to Ann Arbor because we had heard about the Blues Festival, that was in 1970, I think. We gigged around town, mostly at Flood’s. It was really some good times then, with people like Tom and Jerry trying to get their thing at the Blind Pig together. We took off to California to check out that scene there.

SARAH: It was the lure of the Lost Planet Airmen.

SUN: Sort of a “Promised Land?”

JOHN: Sure, that’s the way it seemed to us. We stayed about three months and starved for a while. It’s really strange out there. We were playing around Berkeley at small clubs like Mandrakes and the Long Beach Saloon.

SUN: Like Ann Arbor with the small club scene here.

JOHN: There is a whole thing happening here. Right now, ya know. It’s really good. WHEW! It is bigger out in Berkeley, that’s the difference.

SUN: How did you meet up with Commander Cody?

JOHN: We got booked at the Alley with them and we dug what each other was doing..

SARAH: I think a lot of people used to think about the Commander, before they went to California.

SUN: Yeah, we talked with the Commander while he was in town, he talked about Berkeley and Ann Arbor, and what was happening at both places.

JOHN: Cody helped us a lot. In California, we didn’t have any money, so they fed us and gave us jobs. Really righteous cats. You know, people are relating to the blues a lot differently than they used to. It’s good. But most club scenes are awful. We played at one place in Berkeley that was like a funeral.

GARY: It’s the big business that’s wrong with it. Every time we did a gig we had to hassle with these jerks. Club owners that are just creeps. They don’t know what you play, they don’t care what you play. That man will try to get a band as cheap as they can. A new band would come in and they wouldn’t be able to make it because of people like that. I couldn’t believe it, man, so I said, “fuck it, I’m leaving.”

SUN: So you came to Ann Arbor. The Boogie Brothers have been playing a lot around here, at benefits for the Ann Arbor Sun and the Blind Pig, especially.

JOHN: This is our home. The Blind Pig is our home. The whole thing is happening now! It’s all here in town. Lots of good music happening, you know, with the thing with Pete Andrews and John Sinclair getting together. Doing the Blues and Jazz Festival. Being fair with people, especially musicians. You know that musicians are just like everybody else.

SUN: You’re talking about the Rainbow Corporation getting itself together. They are working at building an alternative to all the rip-off weirdness.

GARY: Yeah, I really like to play in a place where you can see the people. You know, you can see if they are getting off or not. It’s like you go to a concert and you’re sitting on a hill three blocks away and you know that you aren’t with the music. Boogie, say a few words.

SUN: How did you become a part of the Boogie Brothers?

BOOGIE: I heard about the Blind Pig over in England. Lightin’ Slim was in England and he said when you get back call this number. And here I am. I’ll put it in a nutshell--the Boogie Brothers are the best group I’ve ever worked with. They have the feelin’, and the beat, and they have the soul. What makes it so great at the Blind Pig is that everyone understands the band, and the band understands the people. The give the people what they want.

SUN: Yeah, you’ve been playing a lot for free, how has the Boooie Brothers been getting along?

JOHN: We’re a bunch of bums. When we played at the Union Ballroom, they told us to bring our equipment there at 6:30; so, in walked Steve, Gary, and Dave Tippet, all stoned, with two amplifiers. Shit, that was it, that was our equipment. We have to borrow the rest. We come and play and have good times, but there ain’t no money.

BOOGIE: Blues comes from that feeling, from people that had hardships. People who had no place to go. The money is lacking but the love is there. If you don’t have no money, then you got the blues. Everybody, I don’t care who it is, there’s sometime in every day when you’re going to have some type of blues feeling. That’s not discouragement, you can say that it’s dissatisfaction. You say, well, I’ll fight it out. It’s in your body, this feelin’, and it’s also in your mind. It tells a story, everything that you sing in the blues tells a story. That’s through the experience of the people.

SUN: Same with Rock and Roll, when people are getting together, there ain’t nothing like it.

BOOGIE: Yep, Rock and Roll come from the blues. No wonder people getting down. It’s the base, the foundation.

JOHN: Now the way people get down to rock and roll, all the freaks, brothers and sisters, people just want to get into it, really into it, get down and have a good time. They want to be real. One thing about rock and roll, you know super-stars, I don’t see putting anyone up. I’ve seen cats that people idolize, they pay 6 bucks to see them, but what about the cats that are playing the music for the people. Some cats have been playing for years, there’s Red and lots of other cats like him. They have been doing it all their lives because they love to play for people. More and more people are becoming hip to these musicians, though. It’s starting to happen.

SUN: Yeah, you know that we talked about this earlier, the whole money thing came into it. And people only could become hip to bands that big businesses hyped. You know, put their money behind. That music had to have what they thought was commercial value. It’s made it hard for the people’s music to survive.

JOHN: Yeah. America is the blues. Everywhere you go, you just look around at what is happening, it’s the blues. Look at the places that you have to live in, look at the conditions that other people have to live in. Older people are not to blame, they don’t realize. A lot of people have been brainwashed. That is the whole thing that is fucked up with America. That whole hype that messes up people’s minds. You don’t know what to think. They tell you what to think instead of helping you figure it out for yourself.

SARAH: I was pissed at John tonight. When we first started playing, I was just pissed, but after about two songs, it just went away. I just played it all out. If you are angry at someone and you play, it goes away, then you realize that there was no reason to be pissed in the first place.

JOHN: Sometimes things don’t work right, things don’t happen. That’s alright, you just keep pushing. When you are playing and everybody gets loose, everybody’s getting together, that’s beautiful. One thing that is happening today is that everybody is working towards the same thing. People have got different ideas, but it’s really that people have got different ways to say the same thing. There are certain things that everybody feels, that’s what the blues is about. The blues everybody understands. You can always go out for a while but with the way things are, you have to come back to the blues. If you got to move, you know that you got to move.