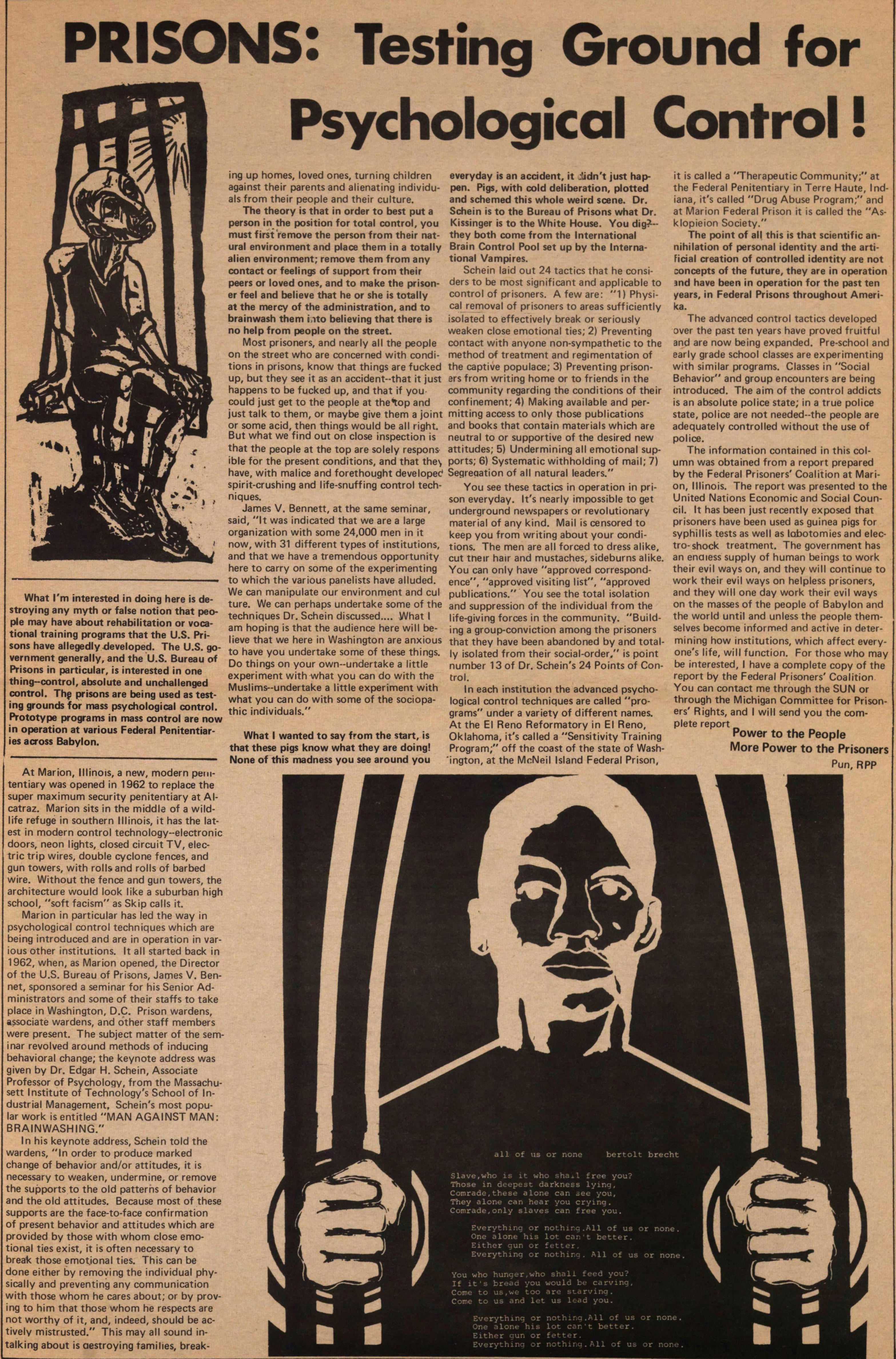 What l'm interested in doing here is destroying any myth or false notion that people may have about rehabilitation or vocational training programs that the U.S. Prisons have allegedly developed. The U.S. government generally, and the U.S. Bureau of Prisons in particular, is interested in one thing–control, absolute and unchallenged control. The prisons are being used as testing grounds for mass psychological control. Prototype programs in mass control are now in operation at various Federal Penitentiaries across Babylon.

At Marion, Illinois, a new, modern penitentiary was opened in 1962 to replace the super maximum security penitentiary at Alcatraz. Marion sits in the middle of a wildlife refuge in southern Illinois, it has the latest in modern control technology-electronic doors, neon lights, closed circuit TV, electric trip wires, double cyclone fences, and gun towers, with rolls and rolls of barbed wire. Without the fence and gun towers, the architecture would look like a suburban high school, "soft facism" as Skip calls it.

Marion in particular has led the way in psychological control techniques which are being introduced and are in operation in various other institutions. It all started back in 1962, when, as Marion opened, the Director of the U.S. Bureau of Prisons, James V. Bennet, sponsored a seminar for his Senior Administrators and some of their staffs to take place in Washington, D.C. Prison wardens, associate wardens, and other staff members were present. The subject matter of the seminar revolved around methods of inducing behavioral change; the keynote address was given by Dr. Edgar H. Schein, Associate Professor of Psychology, from the Massachusett Institute of Technology's School of Industrial Management, Schein's most popular work is entitled "MAN AGAINST MAN: BRAINWASHING."

In his keynote address, Schein told the wardens, "In order to produce marked change of behavior and/or attitudes, it is necessary to weaken, undermine, or remove the supports to the old patterns of behavior and the old attitudes. Because most of these supports are the face-to-face confirmation of present behavior and attitudes which are provided by those with whom close emotional ties exist, it is often necessary to break those emotional ties. This can be done either by removing the individual physically and preventing any communication with those whom he cares about; or by proving to him that those whom he respects are not worthy of it, and, indeed, should be actively mistrusted." This may all sound in-talking about is destroying families, breaking up homes, loved ones, turning children against their parents and alienating individuals from their people and their culture.

The theory is that in order to best put a person in the position for total control, you must first remove the person from their natural environment and place them in a totally alien environment; remove them from any contact or feelings of support from their peers or loved ones, and to make the prisoner feel and believe that he or she is totally at the mercy of the administration, and to brainwash them into believing that there is no help from people on the street.

Most prisoners, and nearly all the people on the street who are concerned with conditions in prisons, know that things are fucked up, but they see it as an accident--that it just happens to be fucked up, and that if you could just get to the people at the top and just talk to them, or maybe give them a joint or some acid, then things would be all right. But what we find out on close inspection is that the people at the top are solely responsible for the present conditions, and that the have, with malice and forethought developed spirit-crushing and life-snuffing control techniques.

James V. Bennett, at the same seminar, said, "It was indicated that we are a large organization with some 24,000 men in it now, with 31 different types of institutions, and that we have a tremendous opportunity here to carry on some of the experimenting to which the various panelists have alluded. We can manipulate our environment and culture. We can perhaps undertake some of the techniques Dr. Schein discussed.... What I am hoping is that the audience here will believe that we here in Washington are anxious to have you undertake some of these things. Do things on your own--undertake a little experiment with what you can do with the Muslims--undertake a little experiment with what you can do with some of the sociopathic individuals."

What I wanted to say from the start, is that these pigs know what they are doing! None of this madness you see around you everyday is an accident, it didn't just happen. Pigs, with cold deliberation, plotted and schemed this whole weird scene. Dr. Schein is to the Bureau of Prisons what Dr. Kissinger is to the White House. You dig?--they both come from the International Brain Control Pool set up by the International Vampires.

Schein laid out 24 tactics that he considers to be most significant and applicable to control of prisoners. A few are: "1) Physical removal of prisoners to areas sufficiently isolated to effectively break or seriously weaken close emotional ties; 2) Preventing contact with anyone non-sympathetic to the method of treatment and regimentation of the captive populace; 3) Preventing prisoners from writing home or to friends in the community regarding the conditions of their confinement; 4) Making available and permitting access to only those publications and books that contain materials which are neutral to or supportive of the desired new attitudes; 5) Undermining all emotional supports; 6) Systematic withholding of mail; 7) Segregation of all natural leaders."

You see these tactics in operation in prison everyday. It's nearly impossible to get underground newspapers or revolutionary material of any kind. Mail is censored to keep you from writing about your conditions. The men are all forced to dress alike, cut their hair and mustaches, sideburns alike. You can only have "approved correspondence", "approved visiting list", "approved publications." You see the total isolation and suppression of the individual from the life-giving forces in the community. "Building a group-conviction among the prisoners that they have been abandoned by and totally isolated from their social-order." is point number 13 of Dr. Schein's 24 Points of Control.

In each institution the advanced psychological control techniques are called "programs" under a variety of different names. At the El Reno Reformatory in El Reno, Oklahoma, it's called a "Sensitivity Training Program," off the coast of the state of Washington, at the McNeil Island Federal Prison, its called a "Therapeutic Community;" at the Federal Penitentiary in Terre Haute, Indiana, it's called "Drug Abuse Program," and at Marion Federal Prison it is called the "Asklopieion Society."

The point of all this is that scientific annihilation of personal identity and the artificial creation of controlled identity are not concepts of the future, they are in operation and have been in operation for the past ten years, in Federal Prisons throughout Amerika. The advanced control tactics developed over the past ten years have proved fruitful and are now being expanded. Pre-school and early grade school classes are experimenting with similar programs. Classes in "Social Behavior" and group encounters are being introduced. The aim of the control addicts is an absolute police state; in a true police state, police are not needed--the people are adequately controlled without the use of police.

The information contained in this column was obtained from a report prepared by the Federal Prisoners' Coalition at Marion, Illinois. The report was presented to the United Nations Economic and Social Council. It has been just recently exposed that prisoners have been used as guinea pigs for syphillis tests as well as lobotomies and electro-shock treatment. The government has an endless supply of human beings to work their evil ways on, and they will continue to work their evil ways on helpless prisoners, and they will one day work their evil ways on the masses of the people of Babylon and the world until and unless the people themselves become informed and active in determining how institutions, which affect everyone's life, will function. For those who may be interested, I have a complete copy of the report by the Federal Prisoners' Coalition You can contact me through the SUN or through the Michigan Committee for Prisoners' Rights, and I will send you the complete report

Power to the People

More Power to the Prisoners