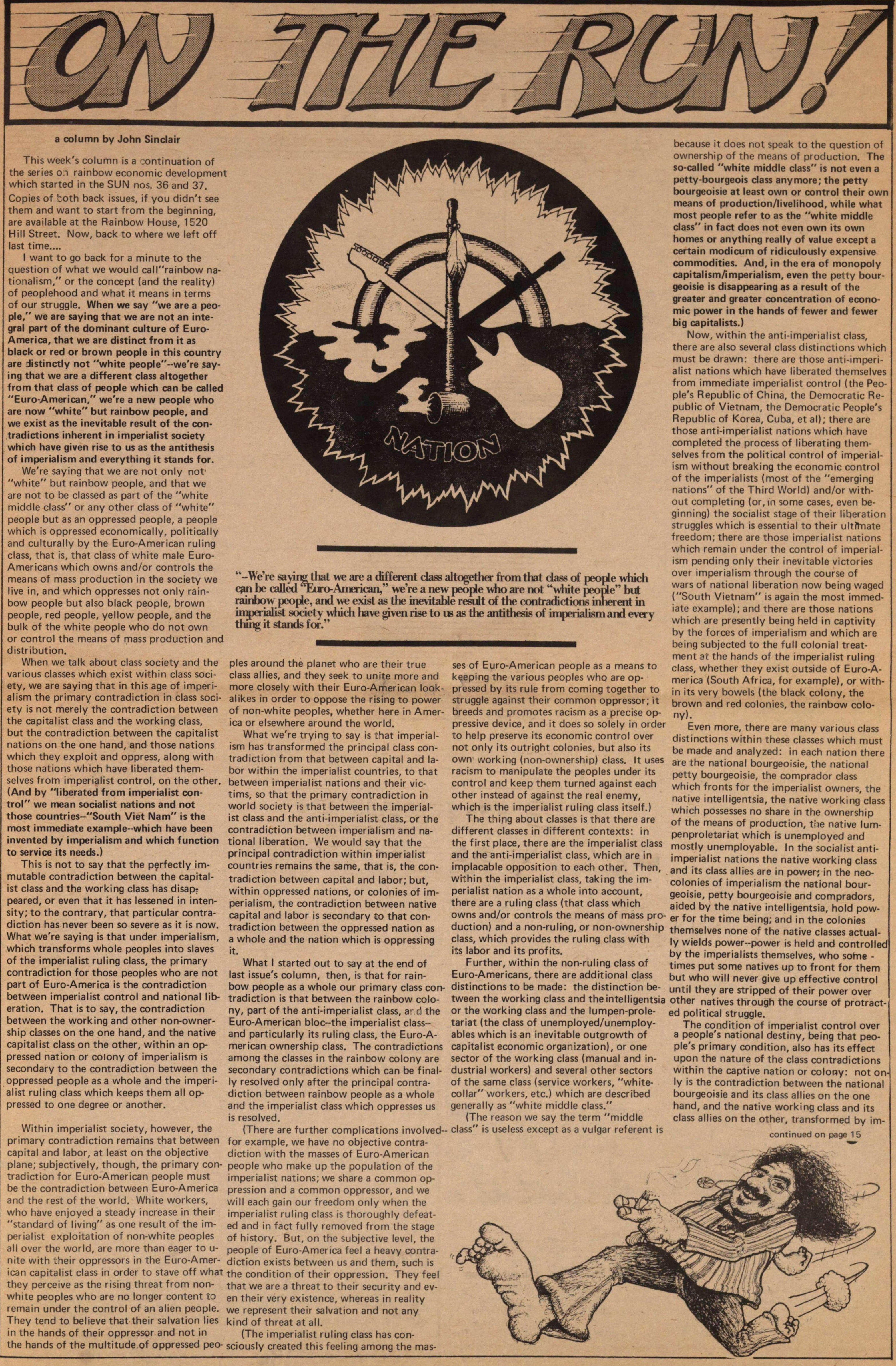 a column by John Sinclair

"-We're saying that we are a different class altogether from that class of people which can be called Euro-American," we're a new people who are not "white people" but rainbow people, and we exist as the inevitable result of the contradictions inherent in imperialist society which have given rise to us as the antithesis of Imperialism and every thing it stands for."

This week's column is a continuation of the series on rainbow economic development which started in the SUN nos. 36 and 37. Copies of both back issues, if you didn't see them and want to start from the beginning, are available at the Rainbow House, 1320 Hill Street. Now, back to where we left off last time....

I want to go back for a minute to the question of what we would call "rainbow nationalism," or the concept (and the reality) of peoplehood and what it means in terms of our struggle. When we say "we are a people," we are saying that we are not an integral part of the dominant culture of EuroAmerica, that we are distinct from it as black or red or brown people in this country are distinctly not "white people"--we're saying that we are a different class altogether from that class of people which can be called "Euro-American," we're a new people who are now "white" but rainbow people, and we exist as the inevitable result of the contradictions inherent in imperialist society which have given rise to us as the antithesis of imperialism and everything it stands for.

We're saying that we are not only not "white" but rainbow people, and that we are not to be classed as part of the "white middle class" or any other class of "white" people but as an oppressed people, a people which is oppressed economically, politically and culturally by the Euro-American ruling class, that is, that class of white male EuroAmericans which owns and/or controls the means of mass production in the society we live in, and which oppresses not only rainbow people but also black people, brown people, red people, yellow people, and the bulk of the white people who do not own or control the means of mass production and distribution.

When we talk about class society and the various classes which exist within class society, we are saying that in this age of imperialism the primary contradiction in class society is not merely the contradiction between the capitalist class and the working class, but the contradiction between the capitalist nations on the one hand, and those nations which they exploit and oppress, along with those nations which have liberated themselves from imperialist control, on the other. (And by "liberated from imperialist control" we mean socialist nations and not those countries--"South Viet Nam" is the most immediate example--which have been invented by imperialism and which function to service its needs.)

Within imperialist society, however, the primary contradiction remains that between capital and labor, at least on the objective plane; subjectively, though, the primary contradiction for Euro-American people must be the contradiction between Euro-America and the rest of the world. White workers, who have enjoyed a steady increase in their "standard of living" as one result of the imperialist exploitation of non-white peoples all over the world, are more than eager to unite with their oppressors in the Euro-American capitalist class in order to stave off what they perceive as the rising threat from nonwhite peoples who are no longer content to remain under the control of an alien people. They tend to believe that their salvation lies in the hands of their oppressor and not in the hands of the multitude of oppressed peoples around the planet who are their true class allies, and they seek to unite more and more closely with their Euro-American lookalikes in order to oppose the rising to power of non-white peoples, whether here in America or elsewhere around the world.

(There are further complications involved--for example, we have no objective contradiction with the masses of Euro-American people who make up the population of the imperialist nations; we share a common oppression and a common oppressor, and we will each gain our freedom only when the imperialist ruling class is thoroughly defeated and in fact fully removed from the stage of history. But, on the subjective level, the people of Euro-America feel a heavy contradiction exists between us and them, such is the condition of their oppression. They feel that we are a threat to their security and even their very existence, whereas in reality we represent their salvation and not any kind of threat at all.

(The imperialist ruling class has consciously created this feeling among the masses of Euro-American people as a means to keeping the various peoples who are oppressed by its rule from coming together to struggle against their common oppressor; it breeds and promotes racism as a precise oppressive device, and it does so solely in order to help preserve its economic control over not only its outright colonies. but also its own working (non-ownership) class. It uses racism to manipulate the peoples under its control and keep them turned against each other instead of against the real enemy, which is the imperialist ruling class itself.)

(The reason we say the term "middle class" is useless except as a vulgar referent is because it does not speak to the question of ownership of the means of production. The so-called "white middle class" is not even a petty-bourgeois class anymore; the petty bourgeoisie at least own or control their own means of production/livelihood, while what most people refer to as the "white middle class" in fact does not even own its own homes or anything really of value except a certain modicum of ridiculously expensive commodities. And, in the era of monopoly capitalism/imperialism, even the petty bourgeoisie is disappearing as a result of the greater and greater concentration of economic power in the hands of fewer and fewer big capitalists.)

Even more, there are many various class distinctions within these classes which must be made and analyzed: in each nation there are the national bourgeoisie, the national petty bourgeoisie, the comprador class which fronts for the imperialist owners, the native intelligentsia, the native working class which possesses no share in the ownership of the means of production, the native lumpenproletariat which is unemployed and mostly unemployable. In the socialist anti-imperialist nations the native working class and its class allies are in power; in the neocolonies of imperialism the national bourgeoisie, petty bourgeoisie and compradors, aided by the native intelligentsia, hold power for the time being; and in the colonies themselves none of the native classes actually wields power--power is held and controlled by the imperialists themselves, who sometimes put some natives up to front for them but who will never give up effective control until they are stripped of their power over other natives through the course of protracted political struggle.

This condition of imperialism can serve to unite many different classes within the national or colonial entity which would otherwise be struggling for power among themselves; in particular, it can bring the progressive national bourgeoisie and its economic and political power to the aid of the native non-ownership classes which are struggling for national liberation. These classes can unite on the principle of national self-determination during the struggle for national liberation, and the native anti-imperialist, anti-capitalist forces can build up their strength through the course of the alliance with the progressive national bourgeoisie to the extent that they will be able to push on and defeat the native capitalists at the point when the struggle against the imperialists is won.

The point is that the struggle of a people to liberate themselves from imperialist control is so heavy that the anti-imperialist (and anti-capitalist) forces need all the help they can get in order to defeat the primary enemy, that is, the imperialist ruling class. At the same time, it must be understood that the commitment of the progressive national bourgeoisie is not primarily a "moral" commitment but a stone economic concern, since the national bourgeoisie stands to realize its fullest potential as a profit-making entity after the imperialists are vanquished and the full wealth of the nation is theirs to rip off from the masses of their own people. Their progressivism, as expressed in their patriotism and their strong national sympathies, is countered in reality by the fact that they only stand to gain from national liberation, provided that liberation does not include an inseparable socialist component, because the removal of the imperialists from the nation's economy provides the national bourgeoisie with the opportunity to grab control of that economy for itself.

I have to stop here again this time, but l'll try to push on with this in the next issue and see if there's any way we can start getting down to the specific conditions in our community which gave rise to all this discussion in the first place. If this is too crazy, or too basic, or too heavy for you to get next to, then you've probably stopped reading already, and I can't say that I blame you. But for people who are interested in trying to grapple with some of this theoretical business in order to figure out what's going down in our community here in Ann Arbor, we can only keep on pushing and see where this talk gets us in the end. If it's worthwhile, then it'll bear itself out in practice, and if not then it ain't all that much time that was wasted reading this shit, anyway. See you next time--ALL POWER TO THE PEOPLE!

WE SHARE A COMMON CULTURE. WE DO THE SAME THINGS, WE LIVE THE SAME WAY, WE LISTEN TO THE SAME MUSIC, SMOKE THE SAME SACRAMENTS, WE ARE UNITED BY OUR AGE. OUR COMMON VALUES, OUR COMMON VISION OF THE FUTURE. WE WANT THE SAME THINGS--FREEDOM, SELF-DETERMINATION, PEACE, JUSTICE, HARMONY, AND EQUALITY FOR ALL PEOPLE. THERE ARE MILLIONS OF US, WE ARE A PEOPLE.

Quoted from "WE ARE A PEOPLE," issue 23 of the Ann Arbor SUN. (Also printed as a pamphlet.)