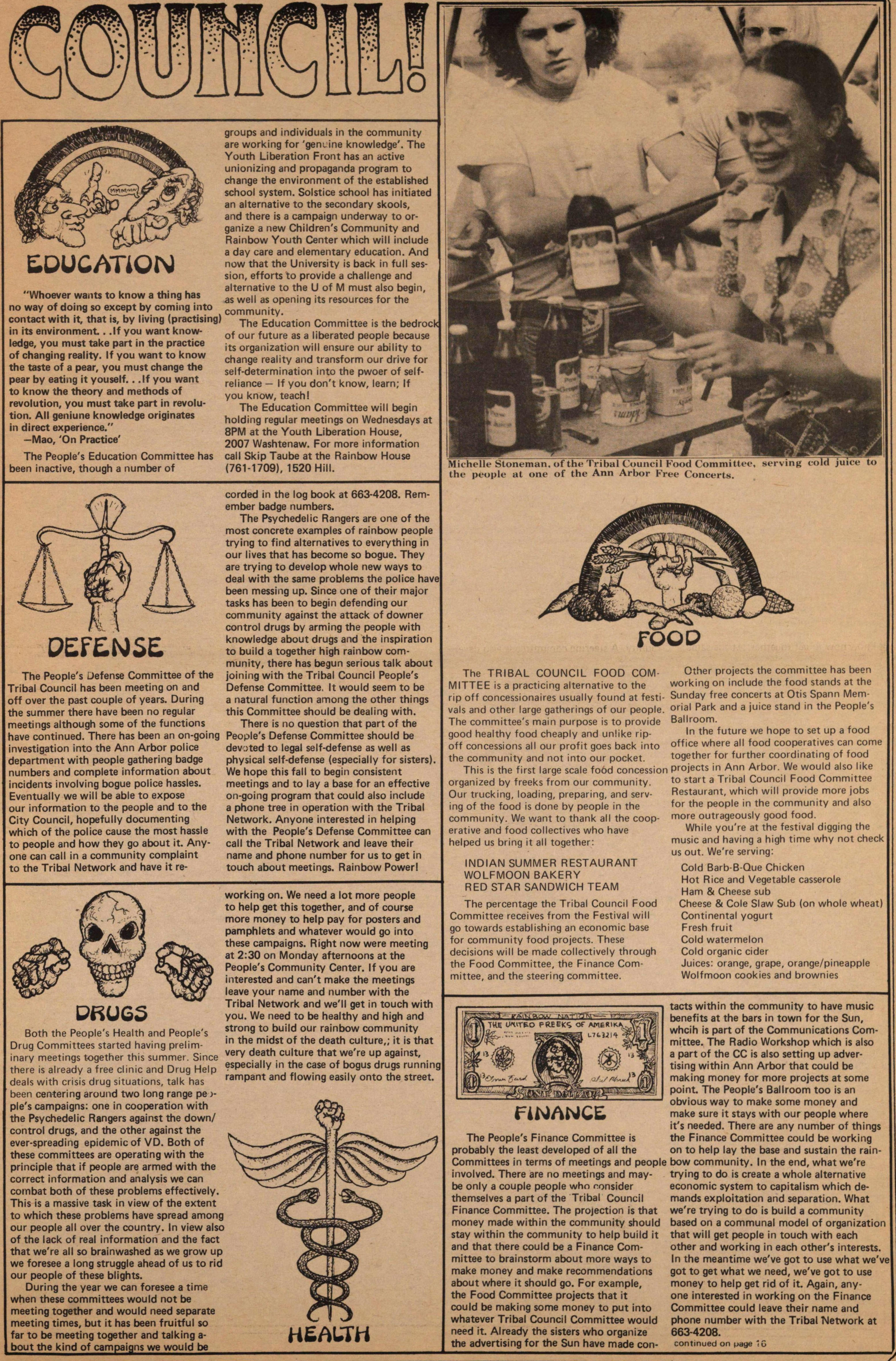 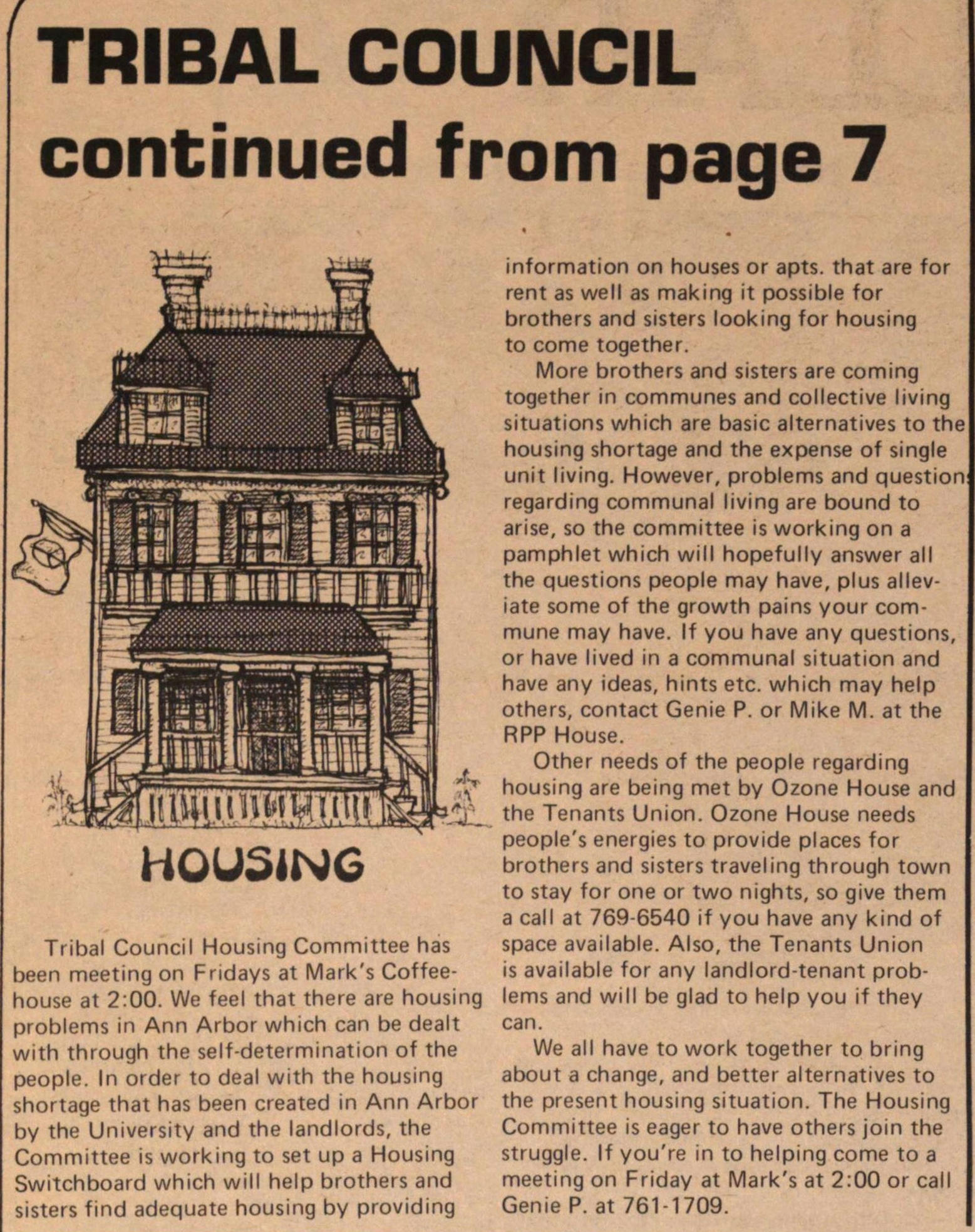 "Whoever wants to know a thing has no way of doing so except by coming into contact with it, that is, by living (practicing) in its environment . . If you want knowledge, you must take part in the practice of changing reality. If you want to know the taste of a pear, you must change the pear by eating it yourself. . .If you want to know the theory and methods of revolution, you must take part in revolution. All genuine knowledge originates in direct experience."

The People's Education Committee has been inactive, though a number of groups and individuals in the community are working for 'genuine knowledge'. The Youth Liberation Front has an active unionizing and propaganda program to change the environment of the established school system. Solstice school has initiated an alternative to the secondary skools, and there is a campaign underway to organize a new Children's Community and Rainbow Youth Center which will include a day care and elementary education. And now that the University is back in full session, efforts to provide a challenge and alternative to the U of M must also begin, as well as opening its resources for the community.

The Education Committee is the bedrock of our future as a liberated people because its organization will ensure our ability to change reality and transform our drive for self-determination into the power of self-reliance - If you don't know, learn; If you know, teach!

The Education Committee will begin holding regular meetings on Wednesdays at 8PM at the Youth Liberation House, 2007 Washtenaw. For more information call Skip Taube at the Rainbow House (761-1709), 1520 Hill.

The People's defense Committee of the Tribal Council has been meeting on and off over the past couple of years. During the summer there have been no regular meetings although some of the functions have continued. There has been an on-going investigation into the Ann Arbor police department with people gathering badge numbers and complete information about incidents involving bogue police hassles. Eventually we will be able to exposé our information to the people and to the City Council, hopefully documenting which of the police cause the most hassle to people and how they go about it. Anyone can call in a community complaint to the Tribal Network and have it recorded in the log book at 663-4208. Remember badge numbers.

The Psychedelic Rangers are one of the most concrete examples of rainbow people trying to find alternatives to everything in our lives that has become so bogue. They are trying to develop whole new ways to deal with the same problems the police have been messing up. Since one of their major tasks has been to begin defending our community against the attack of downer control drugs by arming the people with knowledge about drugs and the inspiration to build a together high rainbow community, there has begun serious talk about joining with the Tribal Council People's Defense Committee. It would seem to be a natural function among the other things this Committee should be dealing with.

There is no question that part of the People's Defense Committee should be devoted to legal self-defense as well as physical self-defense (especially for sisters). We hope this fall to begin consistent meetings and to lay a base for an effective on-going program that could also include a phone tree in operation with the Tribal Network. Anyone interested in helping with the People's Defense Committee can call the Tribal Network and leave their name and phone number for us to get in touch about meetings. Rainbow Powerl

Both the People's Health and People's Drug Committees started having preliminary meetings together this summer. Since there is already a free clinic and Drug Help deals with crisis drug situations, talk has been centering around two long range people's campaigns: one in cooperation with the Psychedelic Rangers against the down control drugs, and the other against the ever-spreading epidemic of VD. Both of these committees are operating with the principle that if people are armed with the correct information and analysis we can combat both of these problems effectively. This is a massive task in view of the extent to which these problems have spread among our people all over the country. In view also of the lack of real information and the fact that we're all so brainwashed as we grow up we foresee a long struggle ahead of us to rid our people of these blights.

During the year we can foresee a time when these committees would not be meeting together and would need separate meeting times, but it has been fruitful so far to be meeting together and talking about the kind of campaigns we would be working on. We need a lot more people to help get this together, and of course more money to help pay for posters and pamphlets and whatever would go into these campaigns. Right now we're meeting at 2:30 on Monday afternoons at the People's Community Center. If you are interested and can't make the meetings leave your name and number with the Tribal Network and we'll get in touch with you. We need to be healthy and high and strong to build our rainbow community in the midst of the death culture,; it is that very death culture that we're up against, especially in the case of bogus drugs running rampant and flowing easily onto the street.

The People's Finance Committee is probably the least developed of all the Committees in terms of meetings and people involved. There are no meetings and maybe only a couple people who consider themselves a part of the Tribal Council Finance Committee. The projection is that money made within the community should stay within the community to help build it and that there could be a Finance Committee to brainstorm about more ways to make money and make recommendations about where it should go. For example, the Food Committee projects that it could be making some money to put into whatever Tribal Council Committee would need it. Already the sisters who organize the advertising for the Sun have made contacts within the community to have music benefits at the bars in town for the Sun, which is part of the Communications Committee. The Radio Workshop which is also a part of the CC is also setting up advertising within Ann Arbor that could be making money for more projects at some point. The People's Ballroom too is an obvious way to make some money and make sure it stays with our people where it's needed. There are any number of things the Finance Committee could be working on to help lay the base and sustain the rainbow community. In the end, what we're trying to do is create a whole alternative economic system to capitalism which demands exploitation and separation. What we're trying to do is build a community based on a communal model of organization that will get people in touch with each other and working in each other's interests. In the meantime we've got to use what we've got to get what we need, we've got to use money to help get rid of t. Again, anyone interested in working on the Finance Committee could leave their name and phone number with the Tribal Network at 663-4208. continued on page 6

Tribal Council Housing Committee has been meeting on Fridays at Mark's Coffeehouse at 2:00. We feel that there are housing problems n Ann Arbor which can be dealt with through the self-determination of the people. In order to deal with the housing shortage that has been created in Ann Arbor by the University and the landlords, the Committee is working to set up a Housing Switchboard which will help brothers and sisters find adequate housing by providing information on houses or apts. that are for rent as well as making it possible for brothers and sisters looking for housing to come together. More brothers and sisters are coming together in communes and collective living situations which are basic alternatives to the housing shortage and the expense of single unit living. However, problems and question regarding communal living are bound to arise, so the committee is working on a pamphlet which will hopefully answer all the questions people may have, plus alleviate some of the growth pains your commune may have. If you have any questions, or have lived in a communal situation and have any ideas, hints etc. which may help others, contact Genie P. or Mike M. at the RPP House.

Other needs of the people regarding housing are being met by Ozone House and the Tenants Union. Ozone House needs people's energies to provide places for brothers and sisters traveling through town to stay for one or two nights, so give them a call at 769 6540 if you have any kind of space available. Also, the Tenants Union is available for any landlord-tenant problems and will be glad to help you if they can.

We all have to work together to bring about a change, and better alternatives to the present housing situation. The Housing Committee is eager to have others join the struggle. If you're into helping come to a meeting on Friday at Mark's at 2:00 or call Genie P. at 761-1709.