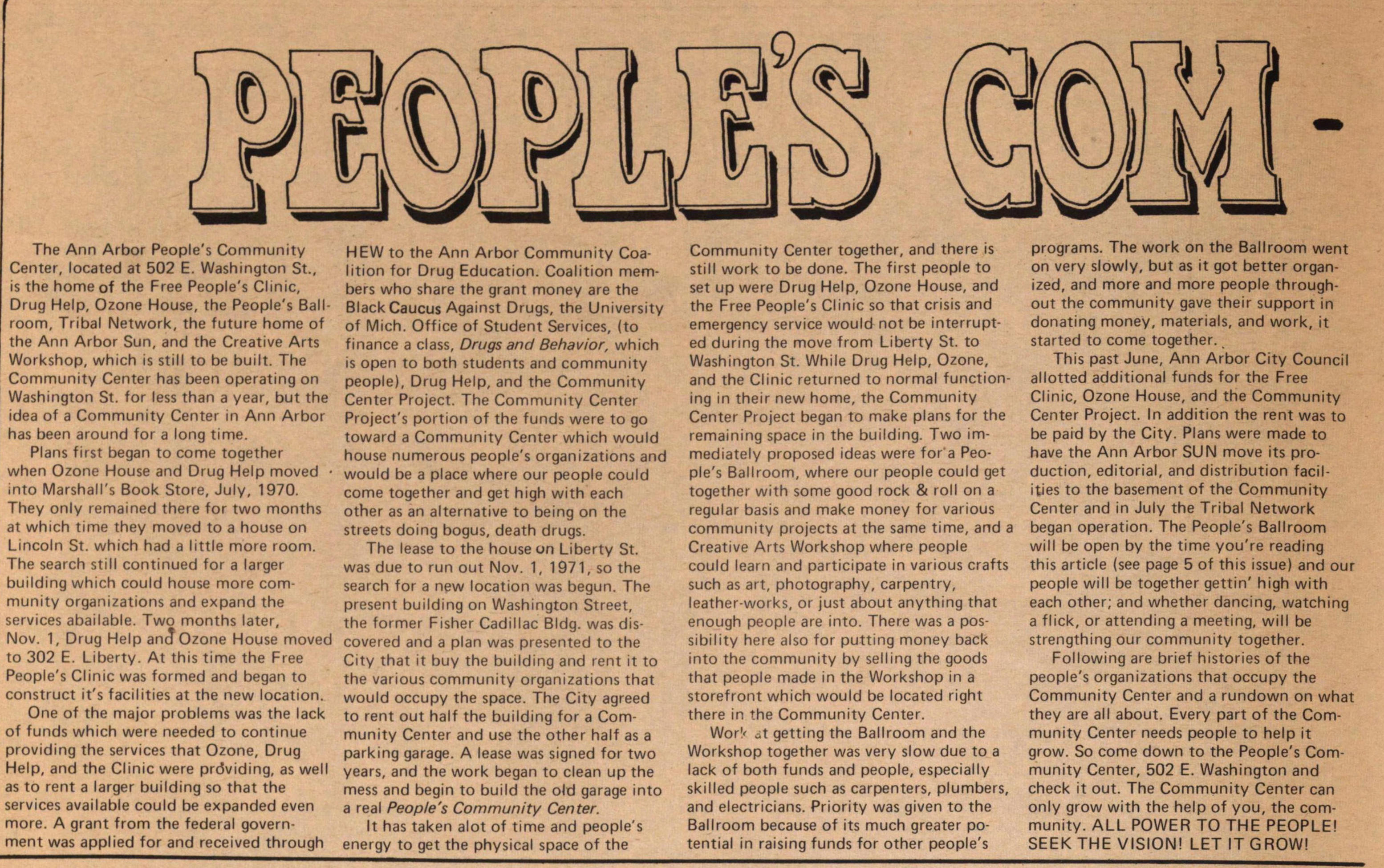 Plans first began to come together when Ozone House and Drug Help moved into Marshall's Book Store, July, 1970. They only remained there for two months at which time they moved to a house on Lincoln St. which had a little more room. The search still continued for a larger building which could house more community organizations and expand the services available. Two months later, Nov. 1, Drug Help and Ozone House moved to 302 E. Liberty. At this time the Free People's Clinic was formed and began to construct its facilities at the new location.

One of the major problems was the lack of funds which were needed to continue providing the services that Ozone, Drug Help, and the Clinic were providing, as well as to rent a larger building so that the services available could be expanded even more. A grant from the federal government was applied for and received through HEW to the Ann Arbor Community Coalition for Drug Education. Coalition members who share the grant money are the Black Caucus Against Drugs, the University of Mich. Office of Student Services, (to finance a class, Drugs and Behavior, which is open to both students and community people). Drug Help, and the Community Center Project. The Community Center Project's portion of the funds were to go toward a Community Center which would house numerous people's organizations and would be a place where our people could come together and get high with each other as an alternative to being on the streets doing bogus, death drugs.

The lease to the house on Liberty St. was due to run out Nov. 1, 1971, so the search for a new location was begun. The present building on Washington Street, the former Fisher Cadillac Bldg. was discovered and a plan was presented to the City that it buy the building and rent it to the various community organizations that would occupy the space. The City agreed to rent out half the building for a Community Center and use the other half as a parking garage. A lease was signed for two years, and the work began to clean up the mess and begin to build the old garage into a real People's Community Center.

It has taken a lot of time and people's energy to get the physical space of the Community Center together, and there is still work to be done. The first people to set up were Drug Help, Ozone House, and the Free People's Clinic so that crisis and emergency service would not be interrupted during the move from Liberty St. to Washington St. While Drug Help, Ozone, and the Clinic returned to normal functioning in their new home, the Community Center Project began to make plans for the remaining space in the building. Two immediately proposed ideas were for a People's Ballroom, where our people could get together with some good rock & roll on a regular basis and make money for various community projects at the same time, and a Creative Arts Workshop where people could learn and participate in various crafts such as art, photography, carpentry, leather-works, or just about anything that enough people are into. There was a possibility here also for putting money back into the community by selling the goods that people made in the Workshop in a storefront which would be located right there in the Community Center.

Work at getting the Ballroom and the Workshop together was very slow due to a lack of both funds and people, especially skilled people such as carpenters, plumbers, and electricians. Priority was given to the Ballroom because of its much greater potential in raising funds for other people's programs. The work on the Ballroom went on very slowly, but as it got better organized, and more and more people throughout the community gave their support in donating money, materials, and work, it started to come together.

This past June, Ann Arbor City Council allotted additional funds for the Free Clinic, Ozone House, and the Community Center Project. In addition the rent was to be paid by the City. Plans were made to have the Ann Arbor SUN move its production, editorial, and distribution facilities to the basement of the Community Center and in July the Tribal Network began operation. The People's Ballroom will be open by the time you're reading this article (see page 5 of this issue) and our people will be together gettin' high with each other; and whether dancing, watching a flick, or attending a meeting, will be strengthening our community together.