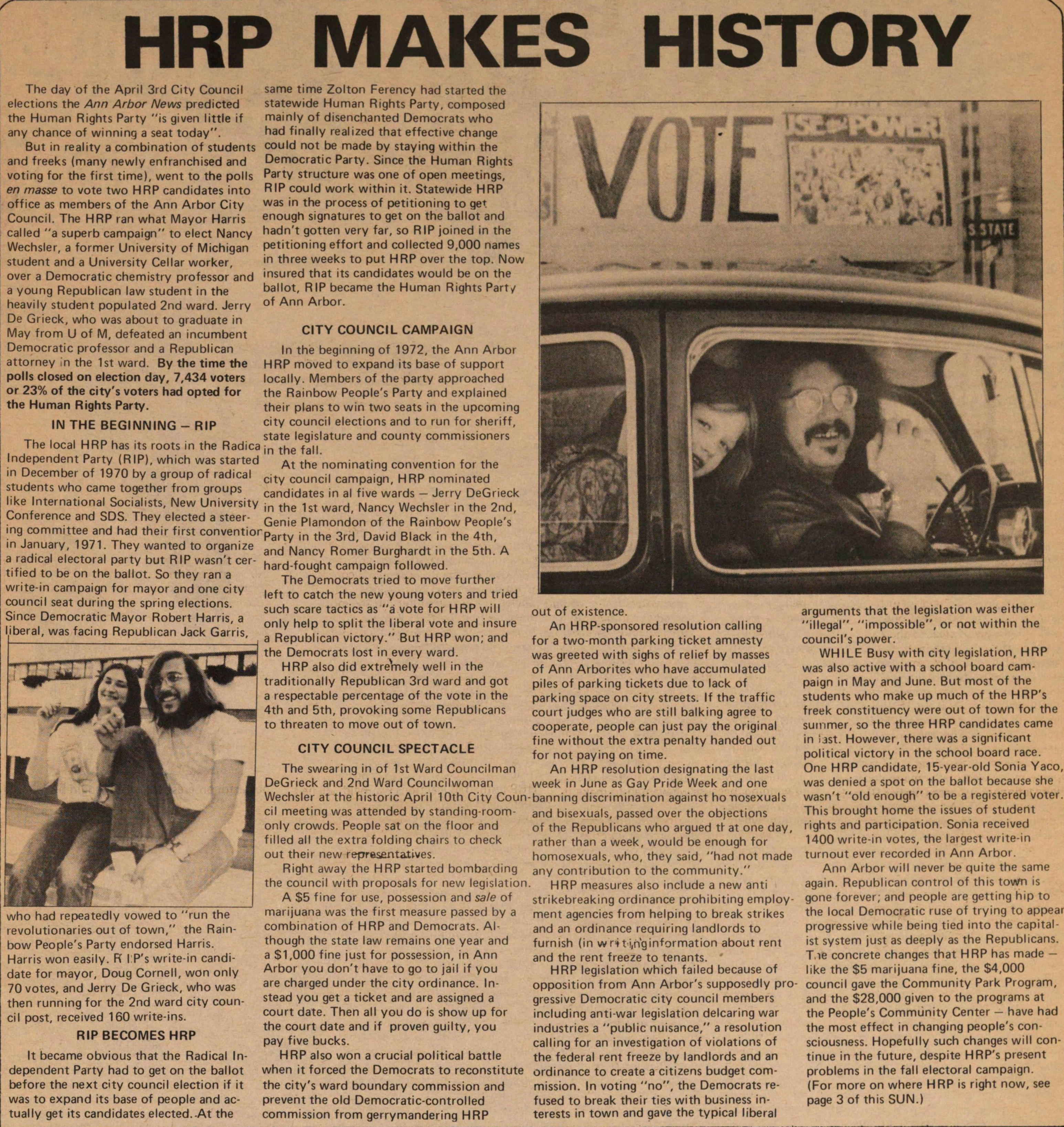 The day of the April 3rd City Council elections the Ann Arbor News predicted the Human Rights Party "is given little if any chance of winning a seat today".

But in reality a combination of students and freaks (many newly enfranchised and voting for the first time), went to the polls en masse to vote two HRP candidates into office as members of the Ann Arbor City Council. The HRP ran what Mayor Harris called "a superb campaign" to elect Nancy Wechsler, a former University of Michigan student and a University Cellar worker, over a Democratic chemistry professor and a young Republican law student in the heavily student populated 2nd ward. Jerry  DeGrieck, who was about to graduate in May from U of M, defeated an incumbent Democratic professor and a Republican attorney in the 1st ward. By the time the polls closed on election day, 7,434 voters or 23% of the city's voters had opted for the Human Rights Party.

The local HRP has its roots in the Radical Independent Party (RIP), which was started in December of 1970 by a group of radical students who came together from groups like International Socialists, New University Conference and SDS. They elected a steering committee and had their first convention in January, 1971. They wanted to organize a radical electoral party but RIP wasn't certified to be on the ballot. So they ran a write-in campaign for mayor and one city council seat during the spring elections. Since Democratic Mayor Robert Harris, a liberal, was facing Republican Jack Garrís,  who had repeatedly vowed to "run the revolutionaries out of town," the Rainbow People's Party endorsed Harris. Harris won easily. R I P's write-in candidate for mayor, Doug Cornell, won only 70 votes, and Jerry De Grieck, who was then running for the 2nd ward city council post, received 160 write-ins.

It became obvious that the Radical Independent Party had to get on the ballot before the next city council election if it was to expand its base of people and actually get its candidates elected.At the same time Zolton Ferency had started the statewide Human Rights Party, composed mainly of disenchanted Democrats who had finally realized that effective change could not be made by staying within the Democratic Party. Since the Human Rights Party structure was one of open meetings, RIP could work within it. Statewide HRP was in the process of petitioning to get enough signatures to get on the ballot and hadn't gotten very far, so RIP joined in the petitioning effort and collected 9,000 names in three weeks to put HRP over the top. Now insured that its candidates would be on the ballot, RIP became the Human Rights Party of Ann Arbor.

In the beginning of 1972, the Ann Arbor HRP moved to expand its base of support locally. Members of the party approached the Rainbow People's Party and explained their plans to win two seats in the upcoming city council elections and to run for sheriff, state legislature and county commissioners in the fall.

At the nominating convention for the city council campaign, HRP nominated candidates in all five wards - Jerry DeGrieck in the 1st ward, Nancy Wechsler in the 2nd, Genie Plamondon of the Rainbow People's Party in the 3rd, David Black in the 4th, and Nancy Romer Burghardt in the 5th. A hard-fought campaign followed.

The Democrats tried to move further left to catch the new young voters and tried such scare tactics as "a vote for HRP will only help to split the liberal vote and insure a Republican victory." But HRP won; and the Democrats lost in every ward.

HRP also did extremely well in the traditionally Republican 3rd ward and got a respectable percentage of the vote in the 4th and 5th, provoking some Republicans to threaten to move out of town.

The swearing in of 1 st Ward Councilman DeGrieck and 2nd Ward Councilwoman Wechsler at the historic April 10th City Council meeting was attended by standing -room only crowds. People sat on the floor and filed all the extra folding chairs to check out their new representatives.

Right away the HRP started bombarding the council with proposals for new legislation.

A $5 fine for use, possession and sale of marijuana was the first measure passed by a combination of HRP and Democrats. Although the state law remains one year and a $1,000 fine just for possession, in Ann Arbor you don't have to go to jail if you are charged under the city ordinance. Instead you get a ticket and are assigned a court date. Then all you do is show up for the court date and if proven guilty, you pay five bucks.

HRP also won a crucial political battle when it forced the Democrats to reconstitute the city's ward boundary commission and prevent the old Democratic-controlled commission from gerrymandering HRP out of existence.

An HRP-sponsored resolution calling for a two-month parking ticket amnesty was greeted with sighs of relief by masses of Ann Arborites who have accumulated piles of parking tickets due to lack of parking space on city streets. If the traffic court judges who are still balking agree to cooperate, people can just pay the original fine without the extra penalty handed out for not paying on time.

An HRP resolution designating the last week in June as Gay Pride Week and one banning discrimination against homosexuals and bisexuals, passed over the objections of the Republicans who argued that one day, rather than a week, would be enough for homosexuals, who, they said, "had not made any contribution to the community."

HRP measures also include a new anti strikebreaking ordinance prohibiting employment agencies from helping to break strikes and an ordinance requiring landlords to furnish in writing information about rent and the rent freeze to tenants.

HRP legislation which failed because of opposition from Ann Arbor's supposedly progressive Democratic city council members including anti-war legislation declaring war industries a "public nuisance," a resolution calling for an investigation of violations of the federal rent freeze by landlords and an ordinance to create a citizens budget commission. In voting "no", the Democrats refused to break their ties with business interests in town and gave the typical liberal arguments that the legislation was either "illegal", "impossible", or not within the council's power.

WHILE Busy with city legislation, HRP was also active with a school board campaign in May and June. But most of the students who make up much of the HRP's freek constituency were out of town for the summer, so the three HRP candidates came in last. However, there was a significant political victory in the school board race. One HRP candidate, 15-year-old Sonia Yaco was denied a spot on the ballot because she wasn't "oíd enough" to be a registered voter This brought home the issues of student rights and participation. Sonia received 1400 write-in votes, the largest write-in turnout ever recorded in Ann Arbor.

Ann Arbor will never be quite the same again. Republican control of this town is gone forever; and people are getting hip to the local Democratic ruse of trying to appear progressive while being tied into the capitalist system just as deeply as the Republicans. The concrete changes that HRP has made - like the $5 marijuana fine, the $4,000 council gave the Community Park Program, and the $28,000 given to the programs at the People's Community Center - have had the most effect in changing people's consciousness. Hopefully such changes will continue in the future, despite HRP's present problems in the fall electoral campaign. (For more on where HRP is right now, see page 3 of this SUN.)