U CELLAR "Better than giving it to Ulrich" 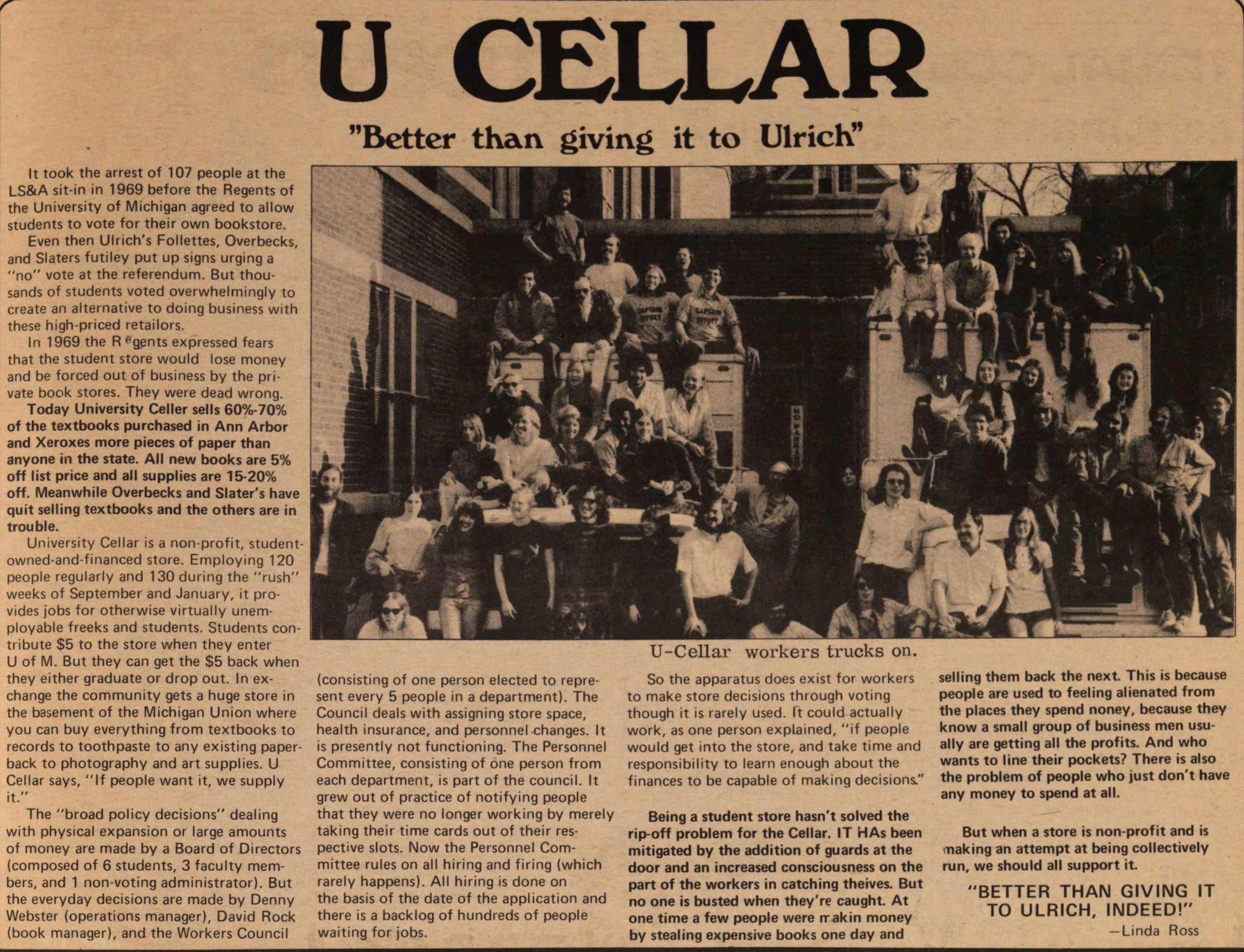 "Better than giving it to Ulrich"

It took the arrest of 107 people at the LS&A sit-in in 1969 before the Regents of the University of Michigan agreed to allow students to vote for their own bookstore.

Even then Ulrich's Follettes, Overbecks, and Slaters futilely put up signs urging a "no" vote at the referendum. But thousands of students voted overwhelmingly to create an alternative to doing business with these high-priced retailers.

In 1969 the Regents expressed fears that the student store would lose money and be forced out of business by the private bock stores. They were dead wrong.

Today University Cellar sells 60% - 70% of the textbooks purchased in Ann Arbor and Xeroxes more pieces of paper than anyone in the state. All new books are 5% off list price and all supplies are 15 - 20% off. Meanwhile Overbecks and Slater's have quit selling textbooks and the others are in trouble.

University Cellar is a non-profit, student-owned-and-financed store. Employing 120 people regularly and 130 during the "rush" weeks of September and January, it provides jobs for otherwise virtually unemployable freeks and students. Students contribute $5 to the store when they enter U of M. But they can get the $5 back when they either graduate or drop out. In exchange the community gets a huge store in the basement of the Michigan Union where you can buy everything from textbooks to records to toothpaste to any existing paperback to photography and art supplies. U Cellar says, "If people want it, we supply it."

The "broad policy decisions" dealing with physical expansion or large amounts of money are made by a Board of Directors (composed of 6 students, 3 faculty members, and 1 non-voting administrator). But the everyday decisions are made by Denny Webster (operations manager), David Rock (book manager), and the Workers Council (consisting of one person elected to represent every 5 people in a department). The Council deals with assigning store space, health insurance, and personnel changes. It is presently not functioning. The Personnel Committee, consisting of one person from each department, is part of the council. It grew out of practice of notifying people that they were no longer working by merely taking their time cards out of their respective slots. Now the Personnel Committee rules on all hiring and firing (which rarely happens). All hiring is done on the basis of the date of the application and there is a backlog of hundreds of people waiting for jobs.

So the apparatus does exist for workers to make store decisions through voting though it's rarely used. It could actually work, as one person explained, "f people would get into the store, and take time and responsibility to learn enough about the finances to be capable of making decisions."

Being a student store hasn't solved the rip-off problem for the Cellar. IT HAs been mitigated by the addition of guards at the door and an increased consciousness on the part of the workers n catching thieves. But no one is busted when they're caught. At one time a few people were makin money by stealing expensive books one day and selling them back the next. This is because people are used to feeling alienated from the places they spend money, because they know a small group of business men usually are getting all the profits. And who wants to line their pockets? There is also the problem of people who just don't have any money to spend at all.

But when a store is non-profit and is making an attempt at being collectively run, we should all support it.

"BETTER THAN GIVING IT TO ULRICH, INDEED!"