1972 Ann Arbor Blues And Jazz Festival: "That's What We Would Call A Real Good Time" 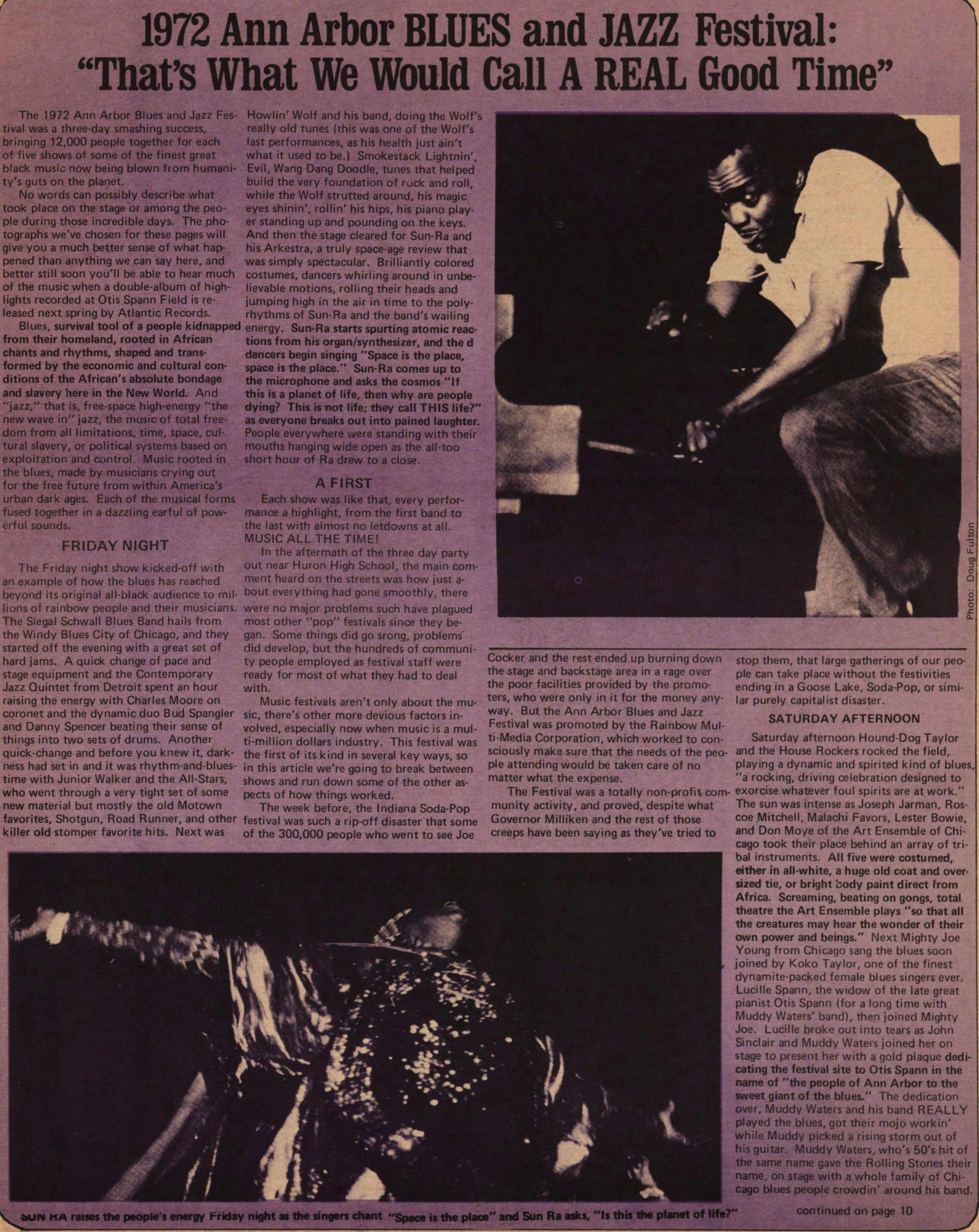 1972 Ann Arbor BLUES And JAZZ Festival: "That's What We Would Call A REAL Good Time"

The 1972 Ann Arbor Blues and Jazz Festival was a three-day smashing success, bringing 12,000 people together for each of five shows of some of the finest great black music now being blown from humanity's guts on the planet.

No words can possibly describe what took place on the stage or among the people during those incredible days. The photographs we've chosen for these pages will give you a much better sense of what happened than anything we can say here, and better still soon you'll be able to hear much of the music when a double-album of highlights recorded at Otis Spann Field is released next spring by Atlantic Records.

Blues, survival tool of a people kidnapped from their homeland, rooted in African chants and rhythms, shaped and transformed by the economic and cultural conditions of the African's absolute bondage and slavery here in the New World. And "jazz," that is, free-space high-energy "the new wave in" jazz, the music of total freedom from all limitations, time, space, cultural slavery, or political systems based on exploitation and control. Music rooted in the blues, made by musicians crying out for the free future from within America's urban dark ages. Each of the musical forms fused together in a dazzling earful of powerful sounds.

The Friday night show kicked-off with an example of how the blues has reached beyond its original all-black audience to millions of rainbow people and their musicians. The Siegal Schwall Blues Band hails from the Windy Blues City of Chicago, and they started off the evening with a great set of hard jams. A quick change of pace and stage equipment and the Contemporary Jazz Quintet from Detroit spent an hour raising the energy with Charles Moore on coronet and the dynamic duo Bud Spangler and Danny Spencer beating their sense of things into two sets of drums. Another quick-change and before you knew it, darkness had set in and it was rhythm-and-blues time with Junior Walker and the All-Stars, who went through a very tight set of some new material but mostly the old Motown favorites, Shotgun, Road Runner, and other killer old stomper favorite hits. Next was Howlin' Wolf and his band, doing the Wolf's really old tunes (this was one of the Wolf's last performances, as his health just ain't what it used to be.) Smokestack Lightnin', Evil, Wang Dang Doodle, tunes that helped build the very foundation of rock and roll, while the Wolf strutted around, his magic eyes shinin', rollin' his hips, his piano player standing up and pounding on the keys. And then the stage cleared for Ra and his Arkestra, a truly space-age review that was simply spectacular. Brilliantly colored costumes, dancers whirling around in unbelievable motions, rolling their heads and jumping high in the air in time to the poly-rhythms of Sun-Ra and the band's wailing energy. Sun-Ra starts spurting atomic reactions from his organ/synthesizer, and the dancers begin singing "Space is the place, space is the place." Sun-Ra comes up to the microphone and asks the cosmos "If this is a planet of life, then why are people dying? This is not life; they call THIS life?" as everyone breaks out into pained laughter. People everywhere were standing with their mouths hanging wide open as the all-too short hour of Ra drew to a close.

Each show was like that, every performance a highlight, from the first band to the last with almost no letdowns at all. MUSIC ALL THE TIME!

In the aftermath of the three day party out near Huron High School, the main comment heard on the streets was how just about everything had gone smoothly, there were no major problems such have plagued most other "pop" festivals since they began. Some things did go wrong, problems did develop, but the hundreds of community people employed as festival staff were ready for most of what they had to deal with.

Music festivals aren't only about the music, there's other more devious factors involved, especially now when music is a multi-million dollars industry. This festival was the first of its kind in several key ways, so in this article we're going to break between shows and run down some of the other aspects of how things worked.

The week before, the Indiana Soda-Pop festival was such a rip-off disaster that some of the 300,000 people who went to see Joe Cocker and the rest ended up burning down the stage and backstage area in a rage over the poor facilities provided by the promoters, who were only in it for the money anyway. But the Ann Arbor Blues and Jazz Festival was promoted by the Rainbow Multi-Media Corporation, which worked to consciously make sure that the needs of the people attending would be taken care of no matter what the expense.

The Festival was a totally non-profit community activity, and proved, despite what Governor Milliken and the rest of those creeps have been saying as they've tried to stop them, that large gatherings of our people can take place without the festivities ending in a Goose Lake, Soda-Pop, or similar purely capitalist disaster.

Saturday afternoon Hound-Dog Taylor and the House Rockers rocked the field, playing a dynamic and spirited kind of blues, "a rocking, driving celebration designed to exorcise whatever foul spirits are at work." The sun was intense as Joseph Jarman, Roscoe Mitchell, Malachi Favors, Lester Bowie, and Don Moye of the Art Ensemble of Chicago took their place behind an array of tribal instruments. All five were costumed, either in all-white, a huge old coat and oversized tie, or bright body paint direct from África. Screaming, beating on gongs, total theatre the Art Ensemble plays "so that all the creatures may hear the wonder of their own power and beings." Next Mighty Joe Young from Chicago sang the blues soon joined by Koko Taylor, one of the finest dynamite-packed female blues singers ever. Lucille Spann, the widow of the late great pianist Otis Spann (for a long time with Muddy Waters' band), then joined Mighty Joe. Lucille broke out into tears as John Sinclair and Muddy Waters joined her on stage to present her with a gold plaque dedicating the festival site to Otis Spann in the name of "the people of Ann Arbor to the sweet giant of the blues." The dedication over, Muddy Waters and his band REALLY played the blues, got their mojo workin' while Muddy picked a rising storm out of his guitar. Muddy Waters, who's 50's hit of the same name gave the Rolling Stones their name, on stage with a whole family of Chicago blues people crowdin' around his band.