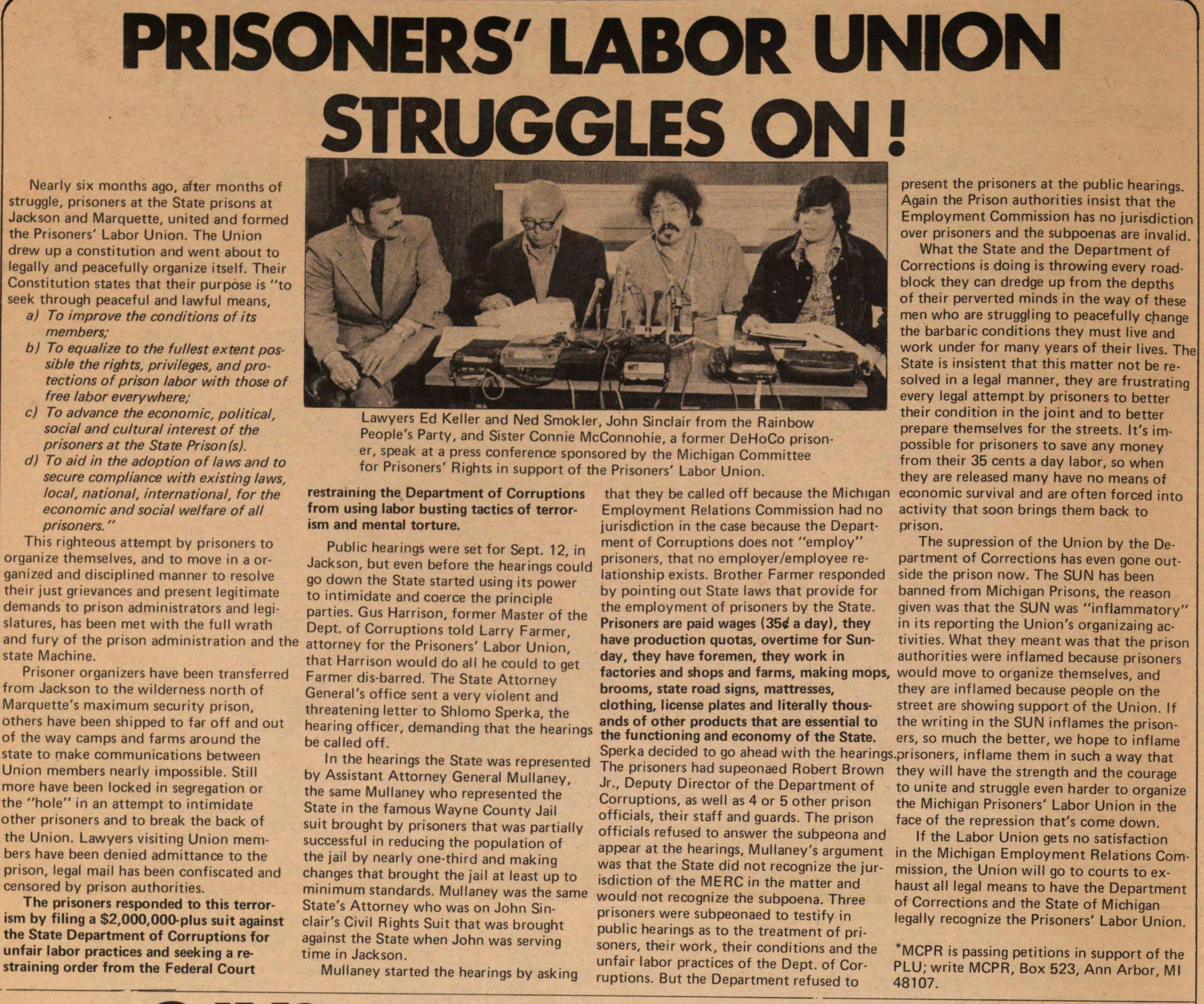 Nearly six months ago, after months of struggle, prisoners at the State prisons at Jackson and Marquette, united and formed the Prisoners' Labor Union. The Union drew up a constitution and went about to legally and peacefully organize itself. Their Constitution states that their purpose is "to seek through peaceful and lawful means, a) To improve the conditions of its members;

b) To equalize to the fullest extent possible the rights, privileges, and protections of prison labor with those of free labor everywhere;

c) To advance the economic, political, social and cultural interest of the prisoners at the State Prisons.

d) To aid in the adoption of laws and to secure compliance with existing laws, local, national, international, for the economic and social welfare of all prisoners."

This righteous attempt by prisoners to organize themselves, and to move in a organized and disciplined manner to resolve their just grievances and present legitimate demands to prison administrators and legislatures, has been met with the full wrath and fury of the prison administration and the state Machine.

Prisoner organizers have been transferred from Jackson to the wilderness north of Marquette's maximum security prison, others have been shipped to far off and out of the way camps and farms around the state to make Communications between Union members nearly impossible. Still more have been locked in segregation or the "hole" in an attempt to intimidate other prisoners and to break the back of the Union. Lawyers visiting Union members have been denied admittance to the prison, legal mail has been confiscated and censored by prison authorities.

Public hearings were set for Sept. 12, in Jackson, but even before the hearings could go down the State started using its power to intimidate and coerce the principle parties. Gus Harrison, former Master of the Dept. of Corruptions told Larry Farmer, attorney for the Prisoners' Labor Union, that Harrison would do all he could to get Farmer dis-barred. The State Attorney General's office sent a very violent and threatening letter to Shlomo Sperka, the hearing officer, demanding that the hearings be cal led off.

In the hearings the State was represented by Assistant Attorney General Mullaney, the same Mullaney who represented the State in the famous Wayne County Jail suit brought by prisoners that was partially successful in reducing the population of the jail by nearly one-third and making changes that brought the jail at least up to minimum standards. Mullaney was the same State's Attorney who was on John Sinclair's Civil Rights Suit that was brought against the State when John was serving time in Jackson.

Mullaney started the hearings by asking that they be called off because the Michigan Employment Relations Commission had no jurisdiction n the case because the Department of Corruptions does not "employ" prisoners, that no employer/employee relationship exists. Brother Farmer responded by pointing out State laws that provide for the employment of prisoners by the State. Prisoners are paid wages (35 cents a day), they have production quotas, overtime for Sunday, they have foremen, they work in factories and shops and farms, making mops, brooms, state road signs, mattresses, clothing, license plates and literally thousands of other products that are essential to the functioning and economy of the State. Sperka decided to go ahead with the hearings. The prisoners had subpeonaed Robert Brown Jr., Deputy Director of the Department of Corruptions, as well as 4 or 5 other prison officials, their staff and guards. The prison officials refused to answer the subpeona and appear at the hearings, Mullaney's argument was that the State did not recognize the jurisdiction of the MERC in the matter and would not recognize the subpoena. Three prisoners were subpeonaed to testify in public hearings as to the treatment of prisoners, their work, their conditions and the unfair labor practices of the Dept. of Corruptions. But the Department refused to present the prisoners at the public hearings. Again the Prison authorities insist that the Employment Commission has no jurisdiction over prisoners and the subpoenas are invalid.

What the State and the Department of Corrections is doing is throwing every roadblock they can dredge up from the depths of their perverted minds in the way of these men who are struggling to peacefully change the barbaric conditions they must live and work under for many years of their lives. The State s insistent that this matter not be resolved in a legal manner, they are frustrating every legal attempt by prisoners to better their condition in the joint and to better prepare themselves for the streets. It's impossible for prisoners to save any money from the 35 cents a day labor, so when they are released many have no means of economic survival and are often forced into activity that soon brings them back to prison.

The suppression of the Union by the Department of Corrections has even gone outside the prison now. The SUN has been banned from Michigan Prisons, the reason given was that the SUN was "inflammatory" in its reporting the Union's organizing activities. What they meant was that the prison authorities were inflamed because prisoners would move to organize themselves, and they are inflamed because people on the street are showing support of the Union. If the writing in the SUN inflames the prisoners, so much the better, we hope to inflame prisoners, inflame them in such a way that they will have the strength and the courage to unite and struggle even harder to organize the Michigan Prisoners' Labor Union in the face of the repression that's come down.

If the Labor Union gets no satisfaction in the Michigan Employment Relations Commission, the Union will go to courts to exhaust legal means to have the Department Df Corrections and the State of Michigan legally recognize the Prisoners' Labor Union.