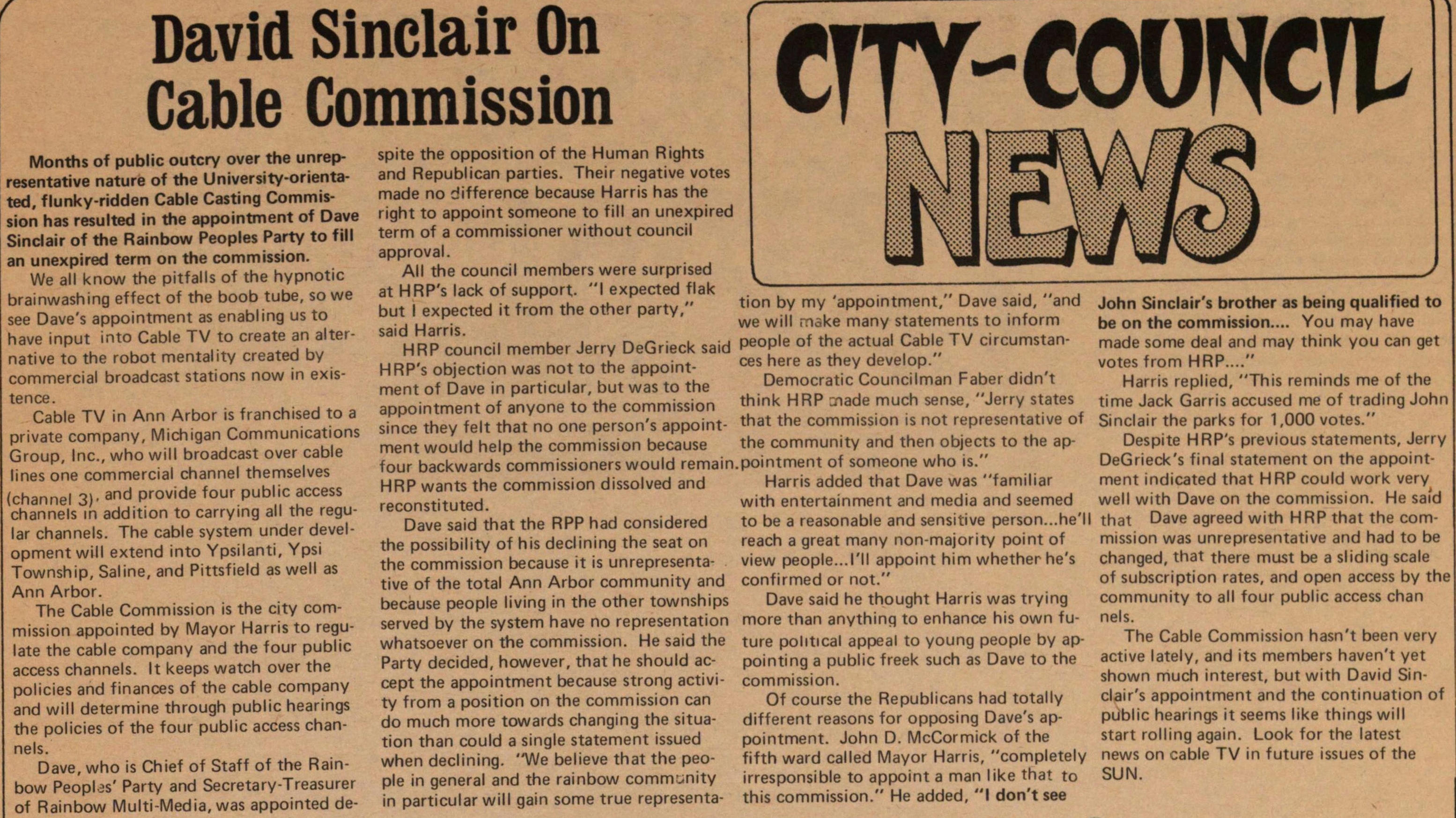 Months of public outcry over the unrepresentative nature of the University oriented, flunky-ridden Cable Casting Commission has resulted in the appointment of Dave Sinclair of the Rainbow Peoples Party to fill an unexpired term on the commission.

We all know the pitfalls of the hypnotic brainwashing effect of the boob tube, so we see Dave's appointment as enabling us to have input into Cable TV to create an alternative to the robot mentality created by commercial broadcast stations now in existence.

Cable TV in Ann Arbor is franchised to a private company, Michigan Communications Group, Inc., who will broadcast over cable lines one commercial channel themselves (channel 3)' and Provide four public access channels in addition to carrying all the regular channels. The cable system under development will extend into Ypsilanti, Ypsi Township, Saline, and Pittsfield as well as Ann Arbor.

Dave, who is Chief of Staff of the Rainbow Peoples' Party and Secretary-Treasurer of Rainbow Multi-Media, was appointed spite the opposition of the Human Rights and Republican parties. Their negative votes made no difference because Harris has the right to appoint someone to fill an unexpired term of a commissioner without council approval.

All the council members were surprised at HRP's lack of support. "I expected flak but I expected it from the other party," said Harris.

Dave said that the RPP had considered the possibility of his declining the seat on the commission because it is unrepresentative of the total Ann Arbor community and because people living in the other townships served by the system have no representation whatsoever on the commission. He said the Party decided, however, that he should accept the appointment because strong activity from a position on the commission can do much more towards changing the situation than could a single statement issued when declining. "We believe that the people in general and the rainbow community in particular will gain some true representation by my 'appointment," Dave said, "and we will make many statements to inform people of the actual Cable TV circumstances here as they develop."

Democratic Councilman Faber didn't think HRP :made much sense, "Jerry states that the commission is not representative of the community and then objects to the appointment of someone who is."

Harris added that Dave was "familiar with entertainment and media and seemed to be a reasonable and sensitive person...he'll reach a great many non-majority point of view people... l'll appoint him whether he's confirmed or not."

Dave said he thought Harris was trying more than any thing to enhance his own future polítical appeal to young people by appointing a public freak such as Dave to the commission.

Of course the Republicans had totally different reasons for opposing Dave's appointment. John D. McCormick of the fifth ward called Mayor Harris, "completely irresponsible to appoint a man like that to this commission." He added, "I don't see John Sinclair's brother as being qualified to be on the commission.... You may have made some deal and may think you can get votes from HRP...."

Harris replied, "This reminds me of the time Jack Garris accused me of trading John Sinclair the parks for 1,000 votes."

Despite HRP's previous statements, Jerry DeGrieck's final statement on the appointment indicated that HRP could work very well with Dave on the commission. He said that Dave agreed with HRP that the commission was unrepresentative and had to be changed, that there must be a sliding scale of subscription rates, and open access by the community to all four public access channels.

The Cable Commission hasn't been very active lately, and its members haven't yet shown much interest, but with David Sinclair's appointment and the continuation of public hearings it seems like things will start rolling again. Look for the latest news on cable TV in future issues of the SUN.